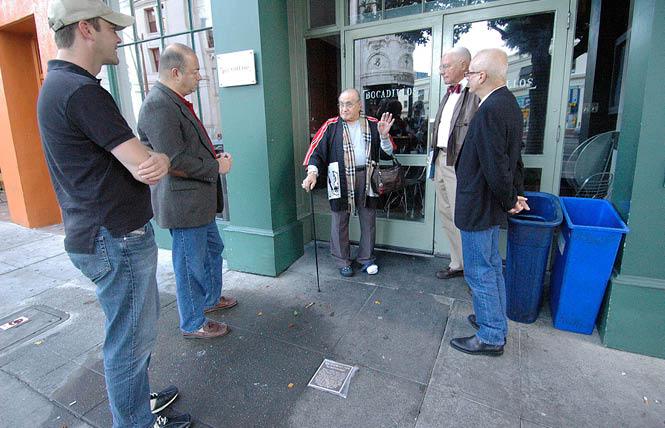 Standing in front of the site of the old Black Cat bar in San Francisco in October 2007, José Julio Sarria, center, reminisced about his time at the bar with, from left, an unidentified man, Don Berger, John Newmeyer, and then-reigning Emperor Michael Dumont. The occasion was the installation of a plaque, foreground, honoring the significance of the bar to San Francisco's LGBT history. Photo: Rick Gerharter

A podcast about the history of the LGBT rights movement before Stonewall will be back for a second season just as Pride Month kicks off around the world.

The second season of "Mattachine: A Queer Serial" will premier June 3 with 26 weekly episodes.

As the Bay Area Reporter previously reported, the first season of the podcast by independent genderqueer historian Devlyn Camp came out a few years ago and covered the beginning of the modern LGBT rights movement in the United States, from 1920s Chicago to the McCarthy-era red baiting of LGBT people in government.

The GLBT Historical Society Museum presented the serial on premises in April 2019.

The podcast particularly focused on the Mattachine Society, an organization formed in 1948 to protect the rights of gay men that was founded by the late Harry Hay, an activist who went on to begin the Radical Faeries.

Camp said that this season, which will begin in 1954 and take listeners to the late 1960s, will be "much more intersectional."

"The Mattachinos — mostly middle class, white men — will become secondary characters in the larger story of queer liberation," Camp said in a phone interview with the B.A.R. April 12.

Camp, 28, said they wanted to tell the story about how the movement for LGBT equality "didn't begin with Stonewall."

"That's what makes this podcast so unique," Camp said. "Many people haven't heard these stories. Sylvia Rivera, Frank Kameny, the Compton riots — these were all happening at the same time. And some of the infighting in these organizations is fascinating."

In what was one of the earliest examples of transgender pushback against police repression, the Compton's Cafeteria riots took place in San Francisco in August 1966, three years before the more famous Stonewall uprising in New York City.

Camp said that season two will also address "both the Black Cats, where so much was happening."

Of course, the Black Cat Cafe in North Beach is known to many San Francisco queer people as the place where the late José Julio Sarria, the first openly gay candidate for public office in American history, held court. Sarria founded the Imperial Court system. He died in 2013 at age 90.

But several years later the Black Cat Tavern in Los Angeles became one of the first sites of resistance to Los Angeles Police Department harassment of the LGBT community. A 1966 New Years' Eve raid of the bar and the subsequent protest inspired the Advocate magazine, Camp said.

When asked about a new and surprising piece of information they learned while producing the podcast, Camp said that it was that the North American Conference of Homophile Organizations met in Chicago during the 1968 Democratic National Convention.

NACHO was an umbrella organization for pro-LGBT rights groups nationwide. Chicago Police had raided and shut down a gay bar, The Trip, in preparation for that year's DNC — which was made famous for dramatic clashes in the streets between police and anti-Vietnam War protesters, and drama inside the convention hall as the Democratic Party affirmed its support for the war.

Meeting at The Trip, NACHO adopted a homosexual bill of rights.

Joey Cain, 65, is a gay man and longtime San Francisco resident who is also an independent historian. Cain was part of a group of people who moved Hay and his longtime partner, John Burnside, to San Francisco decades ago. Hay died in 2002 at age 90. Burnside passed away in 2008 at the age of 91.

"(Camp) asked for feedback and input on what he had done and it's extremely well done," Cain told the B.A.R. by phone May 15. "Taking gay history and making it more accessible is extremely necessary."

"This podcast finds people who were heroes, even if they were a little shady, and reclaims them," Cain said. "What he has done, no book has done as well in the level of detail, especially regarding Elver Barker."

Barker, who died in 2004, was one of the first people involved in the Mattachine Society.

Cain said he hopes people use any extra free time to listen to the podcast, and said he wanted to help raise funds for Camp's work.

"Devlyn has pursued a deep history of the Daughters of Bilitis; we were trying to raise funds because he's been doing this on his own and we've been trying to find backing financially to bring this to the next level," Cain said.

Will Roscoe, also 65 and of San Francisco, told the B.A.R. via phone May 15 that he got in touch with Camp after reading about the first season.

"I saw it written up in a strange, local publication called the B.A.R. three years ago," Roscoe quipped, "and I was with Harry Hay for 25 years, so I had a stake in Harry Hay. I asked 'who is this doing something about Harry?' so I hunted him, listened to it — it's wonderful, and I emailed and connected."

Roscoe said that he and Cain helped have the podcast played at the GLBT Historical Society Museum in the Castro, and that he got to voice some parts in season two.

"(Camp) did such a wonderful job of bringing it alive, and as a moderator he was very well balanced," Roscoe said, who added that while "the Stonewall generation thought they were inventing the wheel," questions of how different or similar queer people are to heteronormative people had been wrestled with for decades.

Camp said he hopes the podcast will lead to LGBT people having a greater appreciation of their own history.

"The FBI hunted us, the State Department fired us, police arrested us, and the history books erased us," Camp said. "This podcast is one of many efforts to reclaim our past and tell the story."

LGBTQ Agenda is an online column that appears weekly, usually on Tuesdays. Got a tip on queer news? Contact John Ferrannini at j.ferrannini@ebar.com. Due to the Memorial Day holiday, LGBTQ Agenda will return June 2.