Press secretary Larry Speakes' snide remarks in 1982 at the first press mention of AIDS at a White House briefing.

"This is going to be our Pearl Harbor moment, our 9/11 moment, only it's not going to be localized, it's going to be happening all over the country and I want America to understand that," said Vice Admiral Jerome Adams, Surgeon General of the United States, on Fox News Sunday, April 5, 2020.

Flurries of articles contrasting COVID-19 with HIV have been published in the past few months. None of them initially drew my attention, as the pandemics seem quite different from one another, with COVID-19 being a fast spreading respiratory disease and HIV being spread by bodily fluids and not through casual contact.
But when the Surgeon General compared COVID-19 with the 9/11 and Pearl Harbor attacks, social media fairly lit up with people mentioning that HIV, as a disease, was a better comparison than a war metaphor. It seems like a good time for a brief review of some basic differences and similarities in the way both diseases have entered the public discourse.

Author Jon Cohen's 'Shots in the Dark: The Wayward Search for an AIDS Vaccine'

The most glaring difference between the pandemics has been the attention paid to COVID-19, with daily briefings from the White House. Even though the first reports of what would be called HIV appeared in MMWR on June 5, 1981, less than six months into the first term of Ronald Reagan, the disease would not be mentioned by the president until his second term.

We would later learn AIDS had been mentioned in early press briefings. In his 2001 book Shots in the Dark: The Wayward Search for an AIDS Vaccine author Jon Cohen revealed transcripts as far back as Oct.15, 1982 where the disease had been mentioned in briefings with White House press secretary Larry Speakes. BuzzFeedNews has published portions of the transcripts, including this from that first press briefing:

"Q: Larry, does the President have any reaction to the announcement—the Centers for Disease Control in Atlanta, that AIDS is now an epidemic and have over 600 cases?

Q: Over a third of them have died. It's known as "gay plague." (Laughter.) No, it is. I mean it's a pretty serious thing that one in every three people that get this have died. And I wondered if the President is aware of it?

(The chilling press conference can be heard on YouTube.

References to the epidemic would continue at press briefings, together with homophobic jokes and laughter, through at least 1984 in the press conferences. By 1984 the number of dead in the U.S. was 4,251.

One similarity between COVID-19 and AIDS is that the concern for the "general public" is something that draws attention to the epidemic. On April 15, 1985 Health and Human Services Secretary Margaret Heckler told the first International AIDS Conference: "We must conquer AIDS before it affects the heterosexual population and the general population."

There has also been a difference in the public response to COVID-19 and AIDS.

By 1981, Shanti was already providing support to people with what would later be called AIDS. In December 1981, nurse Bobbi Campbell, who had been diagnosed at the 16th person in San Francisco diagnosed with KS, posted pictures of his "gay cancer" in the window of Star Pharmacy at the corner of 18th and Castro. He also began writing a column in the San Francisco Sentinel that month.

In April 1982, the Kaposi's Sarcoma Research and Education Foundation (which would later become the San Francisco AIDS Foundation) was formed.

There were a number of benefits early on. On June 13, 1982 the Dog Show, the first AIDS benefit in San Francisco, was held on Castro Street by the Sisters of Perpetual Indulgence with the help of the Tavern Guild and emcees Jane Dornacker and Shirley MacLaine, with benefits going to the KS Foundation.

The Sisters also produced "Play Fair" pamphlet (the first safer sex pamphlet) in June, 1982. Other early benefits include those for San Francisco General Hospital's ward 5B at places like the Roxy Roadhouse (601 Eddy) and Castro Station (456 Castro) and the Men Behind Bars benefits for Shanti, the AIDS Emergency Fund and others.

COVID-19 has also prompted fundraisers from the public. Since we are sheltering in place the response has been on the internet, where a number of fundraisers for bartenders, artists and businesses have appeared.

The public response to both epidemics has included protest as well. The first AIDS vigil, "People Are Dying, Cut The Red Tape," was held on October 8, 1983, sponsored by the AIDS/KS foundation (as it was then known). 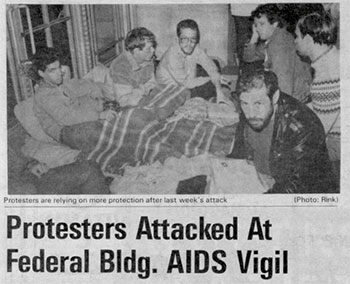 Protestors at the San Francisco Federal building in 1985, in a Bay Area Reporter article. Photo: Rink

On October 28, 1985 a group of protesters chained themselves to the doors of an entrance to the Federal Building, beginning the ten-year AIDS/ARC vigil. On September 24, 1986 Citizens for Medical Justice held a protest at Gov. Deukmejian's office in Sacramento to call for his signature on bills prohibiting discrimination and increasing funding, where they were arrested. Their protests would be followed by many others after ACT UP was formed in March, 1987.

There have been protest rallies in response to COVID-19 this week in Michigan, Ohio, Kentucky and other states against stay at home orders and business closures.

The British newspaper The Guardian describes the protesters taking part in these rallies as "far-right groups as well as more mainstream Republicans" and noted that the protests were "also supported by street-fighting rightwing groups like the Proud Boys, conservative armed militia groups, religious fundamentalists, anti-vaccination group."

Another unfortunate similarity between the epidemics is that news does not seem to have been taken seriously, by the public. The New York Times reports that after the National LGBTQ Taskforce Winter Party Festival in Miami Beach 38 people tested positive for COVID-19 and that two had died.

The response to COVID-19 has been considerably better in San Francisco, and this may be because of lessons well learned from the HIV epidemic. Appearing on All In With Chris Hayes on April 14 Mayor London Breed said, "This is not unfamiliar territory for San Francisco where we have had to lead the charge on our own...the AIDS crisis is a clear example in the 1980s when San Francisco was ignored by the federal government."

We are still in the early stages of the COVID-19 pandemic, but there are clear warning signs from AIDS. As of 2017 there were still 16,350 deaths annually from AIDS in the U.S. Our cumulative total deaths from HIV are now 703,413. There is still no vaccine against HIV.

If the government forgets or ignores our experience with the AIDS and instead uses metaphors for war to analyze COVID-19 we may all live to regret it.