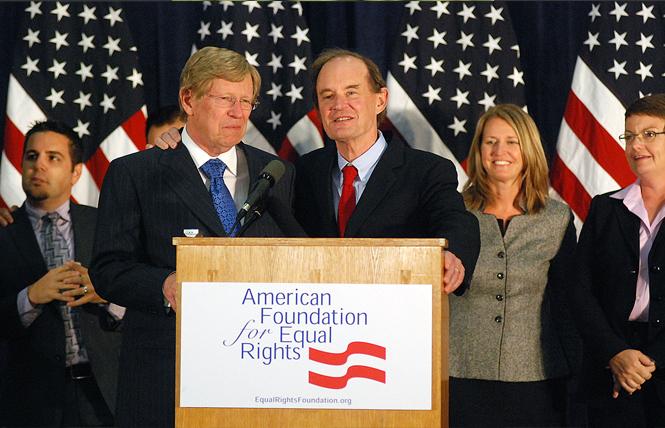 Attorneys for four proponents of Proposition 8 filed a motion in federal court April 1 to keep video recordings in the case of Perry v. Schwarzenegger sealed from public view.

The hearing is set for June 17 at 2 p.m. in the courtroom of U.S. District Court Judge William H. Orrick of the Northern District of California at the federal building at 450 Golden Gate Avenue. Orrick was appointed to that post by then-President Barack Obama.

The motion was filed on behalf of Dennis Hollingsworth, a former Republican leader in the state Senate and head of the Yes on 8 campaign; Prop 8 proponents Gail J. Knight and Mark A. Jansson; and Martin F. Gutierrez, who was also involved in defending the proposition in court.

The trial of Perry v. Schwarzenegger in early 2010 led to then-U.S. District Court Judge Vaughn Walker ruling that Proposition 8's ban on same-sex marriages in California was unconstitutional. Walker was a Bush appointee to the federal bench, and came out as gay following his retirement. His decision was affirmed by the 9th U.S. Circuit Court of Appeals.

The state of California declined to defend itself in court, and when the case reached the U.S. Supreme Court in 2013, that body decided that those who did defend the ban lacked standing to do so because they did not demonstrate how they were harmed by the lower court decisions, which effectively allowed the 9th Circuit ruling to stand and same-sex marriages to resume in California.

That Supreme Court decision came two years before the justices declared bans on same-sex marriage in all 50 states unconstitutional in Obergefell v. Hodges.

KQED-TV, the Bay Area's affiliate of the Public Broadcasting Service, filed a motion several years ago to have tapes of the district court trial unsealed for educational purposes, but Orrick ruled in January 2018 that tapes of the district court trial should remain sealed until August 12, 2020 because court rules in 2010 required sealing of some documentary materials 10 years from the closure of the case.

Orrick's 2018 decision was based on the court rules and not upon personal damage to those who wanted the videotapes to remain under seal.

"Proponents make no effort to show, factually, how further disclosure of their trial testimony would adversely affect them," Orrick wrote. "Indeed, the transcript of the trial has been widely disseminated and dramatized in plays and television shows.

"The resolution of KQED's motion to unseal is properly before me on its merits. I conclude that the common-law right of access applies to the video recordings made by and for the use of Judge Walker but that the compelling justification of judicial integrity — given the unique facts of this case and legal decisions weighing on the legality of Judge Walker's efforts to create those recordings — still precludes their release at this juncture," Orrick continued.

Walker initially made the tapes for a potential broadcast. After the Supreme Court issued a stay against such a broadcast, Walker continued to make tapes for his own personal deliberations.

Shannon Minter, a trans man who is the legal director for the National Center for Lesbian Rights, was the lead attorney arguing for Prop 8's repeal before the California Supreme Court in 2009.

"It is no wonder the proponents of Proposition 8 don't want anyone to see the historical record of their bigotry, but that is not a good reason to keep the trial tapes in this landmark case under seal," Minter stated to the B.A.R. "Especially given the Trump administration's relentless attempts to strip LGBTQ people of hard-won legal protections, it is more important than ever that people have an opportunity to see firsthand how thoroughly the arguments against treating same-sex couples equally were demolished in this case. It is outrageous that the same groups that sought to deny equality to LGBTQ people now seek to hide what they did and why they did it."

Updated, 4/2/20: This article has been updated to include comments from NCLR.