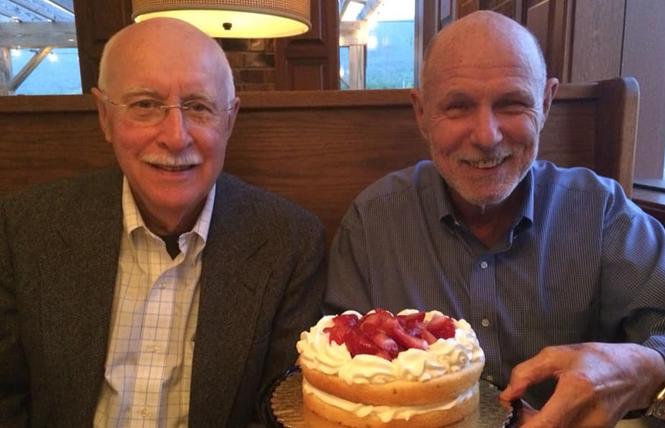 Bud Budlong, one of the early leaders and organizers of San Francisco FrontRunners, died Thursday, March 19, at the age of 82 after a lengthy illness.

In 1975, Mr. Budlong joined a San Francisco running group founded the previous year by Jack Baker and Gardner Pond. The group was reorganized under the FrontRunners name in 1978. Mr. Budlong wrote the first history of the inception of FrontRunners that remains on the club's website (https://www.sffr.org/). He was an assistant director of the 1980 San Francisco Marathon and former San Francisco Gay Freedom Day Parade committee member.

"When I talk (as I do every June) about standing on the shoulders of giants, I'm talking about men like Bud and Don," longtime friend Jay Meashey posted on social media. "They marched in San Francisco after the trial of Harvey Milk's murderer, they comforted dying friends in the scariest days of the AIDS catastrophe, they married when it became legal, and they gave talks to younger generations about all they'd seen and done."

Continuing fallout in sports world from COVID-19
With major sports events already postponed or canceled as precautionary measures during the coronavirus outbreak, international officials spent the last several days gnashing their teeth over whether to go ahead with the 2020 Summer Olympics in Tokyo. On Tuesday, March 24, the International Olympic Committee and Japan organizers announced the games would be postponed until the summer of 2021.

Like waffles? Try this for breakfast. On Sunday, the IOC said it would take up to four weeks to decide whether to postpone. Fifteen minutes later Great Britain told the IOC to step it up. Seven hours later, Canada said it would not compete in this year's Olympics. One hour later and Australia was advising its athletes to prepare for 2021.

"The coronavirus is a different kind of impediment than the one that kept U.S. athletes home in 1980," Olympic gold medal swimmer Nancy Hogshead-Makar told the New York Daily News. "And yet, that sense of shared sacrifice is important. We need to pull together to stop the spread of a virus with the potential to kill millions around the world. Our games, our goals, our pursuits are all being put on hold."

Meanwhile, pandemic countermeasures were rippling through the LGBT sports world.

San Francisco's Gay and Lesbian Tennis Federation has suspended all social and competitive events through April 30. Its board of directors is set to reassess the situation on April 1. The board will also assess the status of the organization's 2020 United States Gay Open, which had been slated for Memorial Day weekend at San Francisco State University. Other spring tournaments on the global Gay and Lesbian Tennis Association calendar have either been canceled or are proceeding subject to change.

The spring season of the San Francisco Gay Softball League has been postponed until April 5 at the earliest. Organizers of the 2020 Amateur Sports Alliance of North America's 2020 Softball World Series have pledged to make adjustments so that leagues that have had to alter their schedules because of the pandemic will be able to qualify for the September event in Virginia Beach.

San Francisco FrontRunners canceled all of its events through April, not because of concerns over the number of participants they would draw, but because the organization thought it would have difficulty keeping all runners six feet apart. The club urged members to continue running on their own. San Francisco Tsunami canceled its practices when city pools were closed. Several club members have been engaged in open water swimming instead.

The 2020 LGBT International Powerlifting Championships had been scheduled to be held July 17-19 in Blackpool, England but were canceled Saturday, March 21. The next championships will be held in Blackpool July 16-18, 2021.

Chris Morgan, male co-chair of the LGBT Powerlifting Union, said global gym closures meant that many athletes would not be able to train properly for an event this July, the college where the event is held has already closed for the year, and many registrants are already committed to other lifts later this year.

"For reference," the club wrote regarding the hand washings, "the opening song to 'Golden Girls' and Shangela's soliloquy yelling at Mimi Imfurst are both the appropriate length."

The club email continued, "Though most of us on the Fog are fortunate to be in low-risk groups for this particular virus, not all of those in the Fog Family are. Whether it's someone in an at-risk demographic, someone who is immunocompromised or has an underlying medical condition, or any other person who needs some additional support at this time, know that we are here for you. It could be you, your parent or another elderly relative, a former or current player, your friend. We're making a list of folks who need some extra support at this time, so let us know if you or someone else need help picking up a prescription, going to the store, taking a pet for a walk, dropping off a meal, or anything else so we can add and help organize support from the team."

The club also said it would send players instructional materials regarding the sport and urged them to continue to work out on their own and stay in touch with each other and their families.

The biannual international Bingham Cup currently is scheduled for August in Ottawa. It is unknown what effect, if any, the current outbreak will have on the event.

Prague Rainbow Spring, an international tournament in the Czech Republic set for May 1-3 that offered swimming, volleyball, beach volleyball, and badminton competitions, has been canceled.

"We are truly sorry that we had to reach such a dramatic measure," organizers posted on the event website. "However, we are fully aware of the criticality of the current situation and we believe that the health of our friends and families is the most important right now."

Organizers of the annual multi-sport Tournoi International de Paris (Paris TIPS) announced on Facebook they planned to stage the May 29-31 event as planned but were canceling all parties leading up to the event. "To date, we remain hopeful that the health situation will improve rapidly," organizers wrote. "Of course, we are monitoring the situation and will make day-to-day decisions."