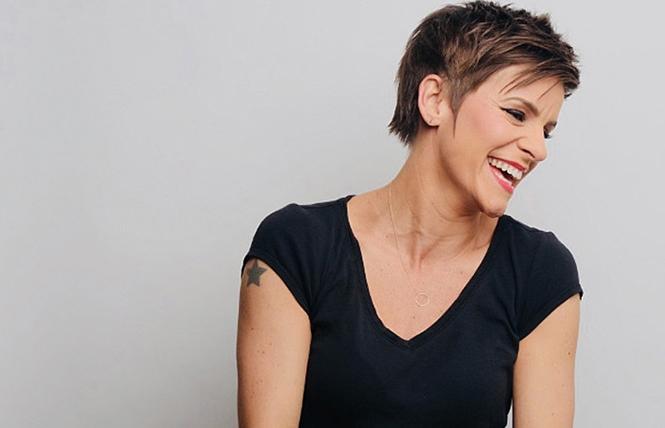 Jenn Colella is best known for her portrayal of Beverley Bass, the first female captain at American Airlines, in the Tony-winning musical Come From Away, about travelers stranded in Gander, Newfoundland in the wake of 9/11.

Colella was nervous about meeting Bass in person. Not because she was intimidated by meeting the inspiration for her role, Colella explained in a recent interview with the Bay Area Reporter, but because she'd done some research in preparing for the part.

"We first met up in La Jolla, where the show played before Broadway," recalls Colella, who will make her San Francisco debut at Feinstein's at the Nikko next weekend. "She spotted me across the room and came over and says 'I believe you're playing me.' Then she began telling all these stories that I already know because I sing about them onstage. She hadn't seen the show yet. But I'd done my homework and I knew that she was this very rightwing Texas Republican woman.

"At one point, she put her hand on my shoulder, and she said 'You're so pretty, do you have a boyfriend?'

"I told her, no, that I had a girlfriend. And she removed her hand right away."

But, similarly to how Come From Away seems to raise audiences' faith in humanity, Colella says that, over what is now five years of acquaintance, she's seen Bass become much more open and comfortable.

"She's spent time with me and my partner and embraced it in a way that was quite lovely. It's been so great to watch her heart soften through getting to know me.

"I'm super out and proud," says Colella, who seems a bit surprised that she's never performed in San Francisco before.

But coming out didn't come easy, Colella, 45, explains. After growing up and attending college in South Carolina, she moved to California to study theater at U.C. Irvine and try to break into the film and television industry.

"There's not so much theater work in Los Angeles," says Colella, "So while I was in school and auditioning, I started to work as a stand-up comic. I had one toe out at that point, but in some it made me want to stay in the closet.

There's a very straight male energy to the comedy clubs. And I was opening for people like Andrew Dice Clay. I can handle it, but I don't like it. Guys would call out women they thought were gay in the audience, make fun of gay men. They didn't treat each other well either, making fun of other comics' material, stealing each others' jokes. A lot of that scene is pretty much the opposite of everything I believe in."

At the same time, actually performing on stage, solo was a boon to Colella, both professionally and personally.

"Doing stand-up, for me, created a deep sense of courageousness. There's no one else to blame if you screw up. The moments you're failing are quite devastating. But you realize you can win the audience back with the next joke if you hold on and keep working."

In addition to heading to New York and breaking into Broadway (She's been in a wide range of musicals, from Urban Cowboy, to Chaplin, to If/Then), Colella has played recurring roles in several television series, including Madam Secretary and the current hit Evil.

"But my love is really the theater," she says.

And her favorite role?

"I am Peter Pan!" says Colella, who has played the ageless boy in her own 20s, 30s and 40s (including recently in Sacramento). "I get better each time because I can bring more depth and emotion to it. Kids don't care that the part is played by a woman. They just believe that I'm Peter Pan."

From Neverland to Gander and beyond, Colella continues to fly high, hinting at a big Broadway announcement she expects to make come autumn.

In the meantime, she's touring with her cabaret act.

"It's got some of my musical theater songs, but it's about me and how I got to where I am, so there's rock and roll and pop music that's had an impact on my life as well.

"I'm super excited about playing in San Francisco," Colella enthuses. "And I'm hoping that there's a really enthusiastic audience of great women who will want to invite me out afterwards!"