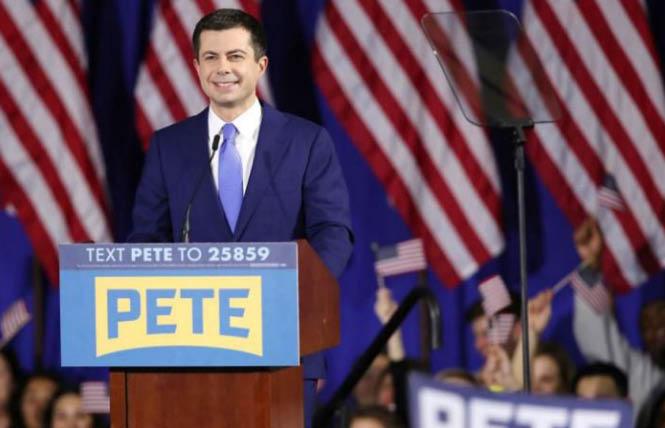 LGBT leaders in New Hampshire were widely divided on whom to support in Tuesday's Democratic presidential primary, but the LGBT community could celebrate another history-making performance by gay presidential hopeful Pete Buttigieg.

Buttigieg, who won the greatest number of state delegates in the February 3 Iowa caucuses, won the same number of delegates (nine) as Vermont Senator Bernie Sanders in New Hampshire, but came in second in terms of votes.

Speaking to supporters in Nashua Tuesday night, Buttigieg, 38, thanked the crowd for supporting a "new generation" of leadership. He thanked his grassroots supporters around the country, highlighting first "the woman in Minnesota who donated [to the Buttigieg campaign] in honor of the wife she lost to lung cancer. ..." Early in his speech, he said, "Thanks to Chasten, the love of my life," to cheers from the crowd.

"A campaign that some said shouldn't be here at all showed that we are here to stay," said Buttigieg.

Sanders, an independent and self-described Democratic socialist, came in first in New Hampshire with 26% of the vote, unofficial returns showed. Sanders came out to give his victory speech while Buttigieg was speaking to his rally, prompting C-SPAN and other major networks to cut away from Buttigieg.

On stage just a few feet away from the podium where Sanders spoke was well-known New Hampshire LGBT state activist Mo Baxley, who served as Sanders' deputy political director.

Senator Amy Klobuchar (Minnesota), who came in third place with 20% of the vote, did not have any high profile LGBT endorsements in New Hampshire.

And gay Congressman Chris Pappas (D-New Hampshire), whose district frequently flips between Democrats and Republicans, stayed steadfastly neutral, refusing to say, even after the polls closed, whom he voted for.

Buttigieg's second place finish continues his history-making performance as a gay candidate and suggests that, so far, voters are more impressed by his intelligence, temperament, military service, and values than they are focused on his sexual orientation.

He also demonstrated during the past week that he could prevail despite numerous attacks by his competitors. After Buttigieg edged out Sanders in securing delegates to the Iowa state convention last week, he became the target of pointed criticism from other candidates.

During the February 7 debate, Biden said Buttigieg has not demonstrated the ability to win a "broad scope of support across the spectrum, including African Americans and Latinos." The Biden campaign began running an attack ad deriding Buttigieg's record as South Bend, Indiana mayor, characterizing it as installing "decorative lights" and "decorative bricks," language that some activists thought sounded like a subliminal effort to draw attention to Buttigieg's being gay.

"It was as homophobic as it gets," said gay Democratic activist David Mixner, who has endorsed Buttigieg.

The LGBTQ Victory Fund issued a news release condemning the ad, calling it "petty and demeaning."

"As a former mayor myself," said Victory Fund President Annise Parker, who led Houston, "I find it insulting that he would belittle the important role mayors play in the everyday lives of their residents. ... Biden's team must be reading some terrible poll numbers for them to release such a desperate ad against a fellow Democrat. It's time they refocus their fire at Donald Trump."

Parker applauded Buttigieg's second place finish in New Hampshire, saying it was a strong answer to questions about Buttigieg's electability.

"It shatters the notion that an openly gay candidate can win in only the most liberal hotspots," said Parker, "and underscores Pete's position as the best candidate to unite Americans in defeating Donald Trump. That the historic nature of his candidacy is relatively subdued is a testament to our progress as a nation. With enormous momentum heading into the upcoming primaries, it is clear America is ready to elect its first openly gay president."

Splaine, one of the LGBT leaders who worked to secure marriage equality in the Granite State, waited until primary day to announce his support. In a Facebook post, he noted, "I have seen many candidates, and I have personally met every one of those who has served as president since 1964," wrote Splaine. "... In Pete Buttigieg, I see the makings of another John F. Kennedy. A candidate who can inspire, unite, and motivate the people of our country to be better than we have been."

But Splaine also noted the importance of Buttigieg's success to the LGBT community specifically, writing "every time Pete Buttigieg does well in an election ... a boy or girl thinking that they are all alone now feels that they more belong."

"And that's important, especially to me because I felt that way for years during the younger part of my life," said the 72-year-old Splaine. "Someday, I hope [being gay] just doesn't matter. But, as we see in many examples around our nation every day in many ways, it still really does matter."

Buttigieg's awareness of the impact of his success on young LGBT people was apparent when he choked up briefly during remarks to a town hall gathering at a middle school in Laconia, New Hampshire, February 4.

It was his fourth of five campaign events of the day, coming the day after the marathon-long caucuses in Iowa the night before. He said his victory in Iowa "validates for a kid somewhere in a community wondering if he belongs, or she belongs, or they belong in their own family — that if you believe in yourself and your country, there's a lot backing up that belief."

The next voting takes place in Nevada, which holds its caucuses February 22. And the next presidential debate will take place February 19. Buttigieg is one of only five candidates to qualify for that debate, thus far, but the Democratic National Committee has modified its qualifying criteria in a way that may allow former New York City mayor Mike Bloomberg to participate.