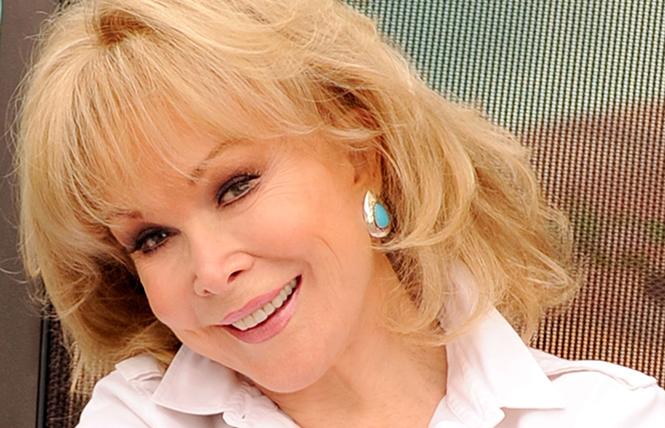 Barbara Eden: Out of the lamp, into SF. Photo: Michael Caulfield/Getty Images

Iconic TV star Barbara Eden, best-known for her role as the genie in the 1960s sitcom "I Dream of Jeannie," will be honored with the Distinguished Alumni Award at San Francisco Conservatory of Music's Annual Fanfare Luncheon on Fri., Feb. 14. It's a homecoming for the actress, whose career dates back to the 1950s. Eden grew up in San Francisco and attended Abraham Lincoln High School in the Sunset District.

During her visit, Eden will tour the Conservatory of Music's campus and participate in a student-led Q&A. In a telephone interview with B.A.R., Eden said it feels good to be coming home to SF. It's been a while since she's been here. The last time was about 10 years ago when she appeared at a Marc Huestis-produced tribute at the Castro Theatre.

"We lived at 1207 Bush St.," Eden said of her early years. "My dad liked to fish, so he would take all his equipment and me, and we'd go on the trolley car down to the wharf. He'd fish and I'd roller skate. There were tourists, but not many. It was mostly people from the neighborhood, fishermen, lots of fishing boats, and the ferries were running."

Eden recalled a Great Aunt who lived in Vallejo. Her family took the ferry across the Bay to visit her. She vividly remembers the sounds of the foghorns. "That was San Francisco to me," she said. "The fog, the ferry boats, my dad fishing." 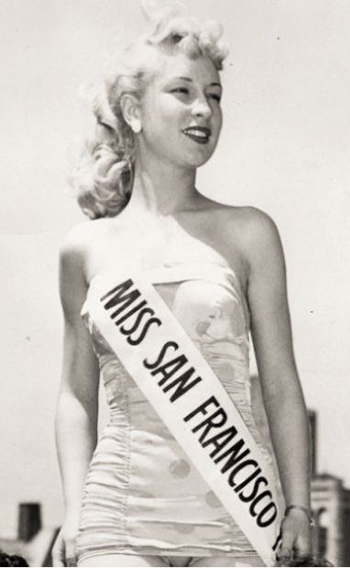 When she was five years old, Eden won first prize for a Halloween costume she wore to a contest on Polk Street. "It was fun," she recalled. "I had a red wig on. I was Little Miss Muffett." She seemed destined for a career in show business. She was Miss San Francisco 1951.

"It was a wonderful experience," she said. "I was shocked when I won. I was studying acting, and my acting teacher said that I was shy. She said if I could stand in a bathing suit in front of people, it'd help me. It was very difficult for me, inside I was really embarrassed, but I did it, so that was a learning experience."

She studied singing at the Conservatory, and went home to study her work. "My mother told me I was singing every note perfectly, but I didn't mean a word of what I was singing," Eden recalls. Her mother suggested that she try acting, and she did.

Eden has fond memories of her teacher Paulina Giovanini at the Conservatory of Music. "She really gave me the freedom to sing," she said. "She gave me the tools to use, she placed my voice. I can never say enough thank yous to her. I enjoyed singing when I was working with her. It was fun, a thrill."

Her acting teacher urged her to "leave the nest" and go to NY or LA to pursue a career. She chose LA because she had relatives there. She worked at a bank at night and looked for acting work by day. Among her early jobs were guest shots on "Perry Mason" and "I Love Lucy." She also received good reviews for the play "The Voice of the Turtle," which led to a contract at 20th Century Fox.

Eden has nothing but praise for "I Love Lucy" star-producer Lucille Ball. "She was wonderful," she said. "She was so good to me. This was my third job. I was playing the sexy young thing, and I put the dress on for our dress rehearsal. She and her assistant put sparkles on the dress to make it prettier. I couldn't believe it. She wasn't only a kind and good person, she wanted her show to be good. She knew what was important and what wasn't."

Eden spent seven years at Fox, then tested for "I Dream of Jeannie" when she saw a casting notice in the trade papers. The show ran from 1965-70, producing 139 episodes, and is now considered a TV classic.

"It's just amazing to me," she said, "and wonderful. She's very easy to live with. I am surprised that it's been seen all over the world, and I get mail from all over. I think it's wonderful."

Eden is happy to be returning to the Conservatory of Music, where she'll be honored for her impact on art and culture. She laughed when asked if she could say something about the impact that she's had.

"It's too subjective," she said. "I'm really happy that I'm getting the honor. I'm going to meet the students," she said. "I'm really looking forward to that." Though she won't have time to visit her old haunts, Eden is still happy to be coming home for a few days. "It makes me feel good to be in San Francisco. It just feels like home. It feels, smells, tastes like home."

The San Francisco Conservatory of Music's Annual Fanfare Luncheon will include an interview with Eden before she's given the Distinguished Alumni Award. Proceeds support SFCM student scholarships. It takes place on Fri., Feb. 14, 12 p.m. in the Green Room at the War Memorial and Performing Arts Center. A limited number of tickets ($500-$1,000) are available at sfcm.edu.