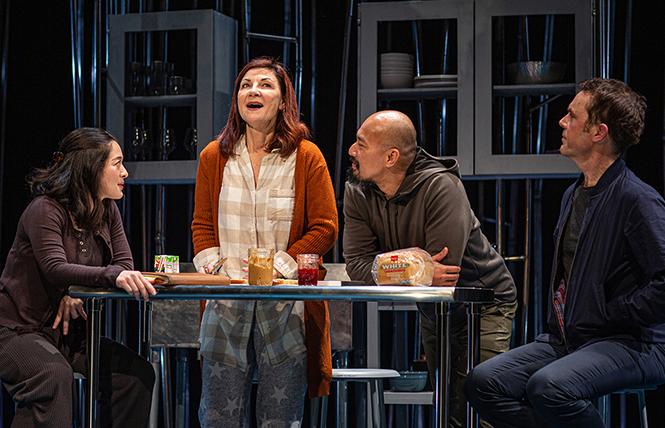 Like Esther and Pauline Friedman, the estranged twin sisters who wrote as Ann Landers and Dear Abby, a duo of dueling life counselors is currently dropping pearls of wisdom just a city block away from each other here in San Francisco. My strong advice to local theatergoers is to take in both ACT's "Wakey, Wakey" (reviewed here last week), in which a guy named Guy offers guidance that's often as nondescript as his name, and San Francisco Playhouse's "Tiny Beautiful Things," in which a woman with the pseudonym Sugar dispenses sweet empathy along with tart kicks in the pants. The coincidence of these two fine productions running simultaneously offers a fascinating opportunity to consider how similar subject matter can be approached with wildly different artistic styles.

"Tiny Beautiful Things," tenderly directed by SF Playhouse artistic director Bill English and starring Susi Damilano, the company's co-founder and English's wife, is by far the more straightforward of the two productions. Damilano exudes hard-earned, no-nonsense smarts as the writer of the online advice column "Dear Sugar," which ran for a couple of years on The Rumpus website, written under nom de plume by Cheryl Strayed, now better known for her bestselling memoir, "Wild."

The show's conceit has letter-writers (Mark Anderson Phillips, Kina Kantor and Jomar Tagatac, in multiple roles that span ages, ethnicities and genders) materializing on a set that simultaneously evokes Sugar's apartment and her mind. Designer Jacquelyn Scott situates a kitchenette and living room sofa amidst a shimmery synaptic forest of silver bamboo-like poles. Their cross-braces also bring the phrase "emotional crutches" to mind. Tagatac turns in stand-out performances, morphing elegantly from a little kid to a man in the midst of gender transition to an everyday Joe who's afraid to say, "I love you." Phillips' turn as a father grieving for his son, killed by a drunk driver, is harrowing, made all the more remarkable given that he embodies this psychologically complex character mere minutes after having played someone else.

Unlike most advice columnists, Sugar never sets herself at a remote, omniscient distance from her letter-writers, so we ultimately hear more of her own story than any one of her questioners'. It includes sexual and substance abuse, the death of both parents, and single motherhood. There's a radical transparency to this approach that makes Sugar not only a source of information and compassion, but also a fellow traveler to both her correspondents and, by extension, to audience members who feel correspondences of their own to the situations being described. Because there's no overarching plotline to be worked through, the show is able to keep leaping from one crisis and solution to the next, never boring and pretty much assuring there will be something specific that everyone can relate to.

"Tiny Beautiful Things" is an admirably sly theatrical contraption, more audience-friendly but just as unconventional as its neighbor around the corner, "Wakey, Wakey." Stirring voyeurism and sentiment, it gives viewers a license to eavesdrop and a shortcut to intimacy, pushing our naughty and nice buttons at the same time.