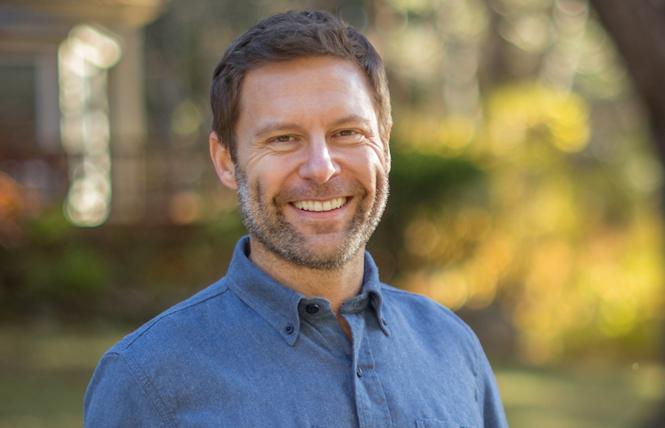 For 12 years Ross LaJeunesse called San Francisco home, moving first to Noe Valley in 1998 shortly after earning his law degree at Harvard. He then lived in a cottage in Eureka Valley and lastly in an apartment South of Market.

During four of those years he commuted most weekdays to Sacramento, as he worked for former state Controller Steve Westly as his chief of staff and chief deputy controller then as deputy chief of staff and senior adviser to former Governor Arnold Schwarzenegger. In 2008 Google hired him to head its government affairs in the Western U.S. and two years later promoted him to oversee its governmental affairs in Asia.

He moved to Hong Kong for three years, returning stateside to represent the tech company's interests in Washington, D.C. It was there he met his future husband, Patrick Oathout, a Fulbright scholar who now works as a management consultant.

But increasingly alarmed at Google's decision to do business in authoritarian countries like Saudi Arabia and China, as he explained in a recent post he published on the website Medium, LaJeunesse quit last May. He and Oathout subsequently moved back to LaJeunesse's hometown of Biddeford, Maine.

In the fall LaJeunesse, a Democrat, announced he was running in the June primary to be his party's candidate on the November ballot against Republican U.S. Senator Susan Collins, as the moderate GOPer is seen as one of the must vulnerable incumbents this election cycle. Should he win, LaJeunesse, 50, would become the first out gay man elected to the U.S. Senate.

In a phone interview Monday with the Bay Area Reporter — he will be in San Francisco Thursday to attend a fundraiser being hosted by several local gay officials — LaJeunesse said he hadn't ever thought of seeking elective office during his years working in government in the Golden State or on Capitol Hill in the mid-1990s as a staffer to former senators George J. Mitchell and the late Edward M. Kennedy.

"I thought policy and government affairs was a way of making the world better. It is only after watching what happened during the past two years and seeing what's happened to my home state and seeing what's happened to the country," LaJeunesse said that he decided he should become a candidate. "Susan Collins is a key part of the problem. I just decided I got tired of complaining about it. If you don't like what is happening, you get your butt off the bench and do something about it. I told Patrick I am going home."

One of his selling points to voters in Maine is that he can provide moderate leadership and, having worked for politicians on both sides of the aisle, pass legislation in the divided Senate.

"Susan Collins doesn't deserve to represent Maine anymore," he said. "She is not a moderate. She is not the person she was."

First he has to survive the June 9 primary against several other Democratic candidates, including the perceived frontrunner Sara Gideon, speaker of Maine's House of Representatives who has the backing of the Democratic Senatorial Campaign Committee and progressive groups like Emily's List and Planned Parenthood.

As for the historic nature of his candidacy in terms of being able to shatter a pink political ceiling — just two out women, Tammy Baldwin, a lesbian from Wisconsin, and Arizonan Kyrsten Sinema, who is bisexual, have been elected to the Senate — LaJeunesse doubts it will be a factor for most Maine voters. In fact, he touts his husband in the first sentence of his bio posted on his campaign site.

"I always thought of Mainers as fiercely independent people more than anything else. Maine was the first state to approve marriage equality at the ballot box," he noted. "So I trust and am proud of the role Mainers have played in advancing marriage equality and advancing LGBTQ equality. I don't have any concerns about my marriage or who I am being a factor in this election."

He first came out at age 20 while an undergraduate at Dartmouth in 1990 "when it was a pretty hostile place to do that," recalled LaJeunesse, and has pushed for LGBTQ rights ever since. He worked on the Ryan White AIDS Care Act and an early version of the Employment Non-Discrimination Act when he was a policy analyst on Kennedy's Senate staff.

"I wouldn't just be the first openly gay senator elected; I would be someone with a lifelong commitment to advancing LGBTQ rights my entire life. I think that is important for the community to know," said LaJeunesse.

He earned the endorsement of the LGBTQ Victory Fund last week, which noted in announcing its support January 23 that LaJeunesse's election could help flip control of the Senate to Democrats and allow for LGBT legislation that has been blocked by Republican Majority Leader Mitch McConnell (Kentucky) to be brought to the floor for votes.

"A leadership change in the U.S. Senate is essential to securing federal LGBTQ equality legislation — and Ross is the candidate best-positioned to defeat Susan Collins and remove Mitch McConnell as majority leader," said Annise Parker, the fund's president and CEO and a former Houston mayor. "I know Ross well, and whether in government or the private sector, he consistently puts people and principles ahead of politics and self-interest. That track record will be a defining contrast between him and Senator Collins, who continues to put party before country with her impeachment trial votes and support for the Trump agenda."

In the Senate, LaJeunesse's background in the global technology field and international human rights would make him a leader on both issues at a time when expertise on each is lacking on Capitol Hill, noted gay former San Francisco Supervisor Bevan Dufty, who worked with LaJeunesse professionally and the two became friends.

"He brings a unique skill set that doesn't exist in the Senate," said Dufty.

LaJeunesse will soon be releasing a 10-point technology platform with specific steps he believes the federal government can take to oversee tech firms and address the myriad issues their businesses have created. He believes nationwide policies are needed to protect people's online privacy and their personal data collected and sold by tech firms. He also favors educating children on how to be internet literate and spot fake news spread via social media.

"Tech companies have been eager to convince government that self-regulation is the answer and that is not the truth. Government needs to step up and step up in a significant way to make sure that technology is benefiting all people and all users and not just the tech executives and shareholders," he said. "These tech platforms have enormous power."

He also faulted Collins for not using her position to bring high-speed internet to Maine. There are also large swaths of the Pine Tree State where there is no cellphone reception, added LaJeunesse, who worked on the first report about broadband access in California when he worked at the California Public Utilities Commission in the early 2000s.

"Here we are in Maine in 2020 and if you go half an hour outside Portland, Maine you lose mobile phone reception," he said. "It holds back our economy."

Asked about the push by some members of San Francisco Pride to ban his former employer Google from the annual LGBT celebration due to it taking stances seen as harming LGBT users of its sites, such as YouTube, LaJeunesse told the B.A.R. he was unaware such a demand had been made. But recalling the "crazy" diversity training he had to participate in while at Google, where he and others were made to shout homophobic slurs at their co-workers, as he recounted in his Medium post, LaJeunesse said the issue of corporate sponsorships of Pride events "is a subject worth debating."

He recalled it wasn't so long ago that having national and global brands support for Pride parades and the LGBT community was seen as a success. While at Google, LaJeunesse said he pushed for the company in 2008 to take its public stance against California's Proposition 8, which banned same-sex marriages in the state until being overturned by federal courts.

"It is interesting to me so many companies want to be a part of Pride, like a marketing thing," said LaJeunesse, adding that in general he doesn't have a problem with it if "companies are using it in a way to walk the walk and not just talk the talk."

Donations of at least $100 are requested, and to RSVP for the address, email bevan.dufty@gmail.com. The event is a way for Dufty to thank LaJeunesse for being one of his best fundraisers when he ran for mayor of San Francisco in 2011.

"He was living on the East Coast but let's just say he helped me get funds for my mayor's race," recalled Dufty. "Hands down he was one of my best fundraisers. It is why I have confidence he is going to prevail in his Senate race."

Web Extra: For more queer political news, be sure to check http://www.ebar.com Monday mornings for Political Notes, the notebook's online companion. This week's column looked at how LGBT CA legislative candidates are focused on housing and homeless issues in their campaign videos and ads.

UPDATED 1/29/20 to correct the name of LaJeunesse's hometown in Maine, which is Biddeford.