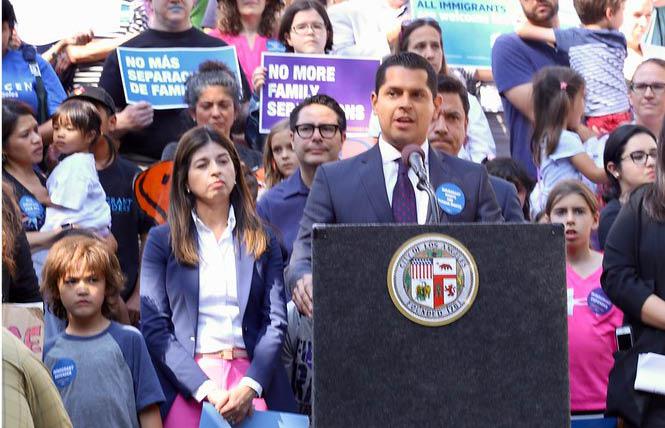 The TransLatin@ Coalition in Los Angeles is proposing the creation of transgender wellness and equity funds following Governor Gavin Newsom's budget proposal this month — and state lawmakers have expressed willingness to help shape the plan and advocate for funding of trans-led nonprofits.

Assemblyman Miguel Santiago (D-Los Angeles) told the Bay Area Reporter in a January 17 phone call that he plans to submit a $15 million budget request to help in the creation of a single Transgender Wellness and Equity Fund.

The coalition is asking for the funds to be in at least five state departments, according to Miché Pulido, the manager of policy for the coalition.

"We want to advocate for funds in different agencies and departments," Pulido said in a phone interview with the B.A.R. January 16. "They would direct funds to trans-led organizations through grants."

Santiago said he preferred one fund to five because it would help the money be used for different purposes.

"We want to make sure we are flexible," Santiago said. "Rent subsidies are such a big issue in the trans community."

(In San Francisco, the B.A.R. reported last week that the Our Trans Home SF program will soon begin offering subsidies; the two-year $2 million in funds come from the city's budget.)

The state funds would disburse money to trans-led organizations to address the systemic discrimination that transgender, gender-nonconforming, and intersex, or TGI, people face.

"We applaud Governor Newsom's proposed budget, as it allocates funding to life-saving services and initiatives for many people and industries, but fails to address how these specific funding sources will specifically cater to benefit the lives of TGI people," the January 15 news release from the coalition states. "The proposed budget must intentionally address the discrimination TGI people face in society and allocate funding that will support TGI communities across the state and be able to change the landscape and livelihood of our community."

Santiago said he met with the coalition last year and is working in collaboration with it.

"In California we still have a long way to go," he said.

Santiago's $15 million request would come out of the general fund, he explained.

Transgender-led organizations can use the funds "to create programs focused on coordinating health, behavioral health (mental health and substance use disorders), and social services, including supportive housing for people with severe mental illness," for TGI people, Santiago spokeswoman Stephanie Gerstle wrote in a January 17 email to the B.A.R.

Pulido said that the TransLatin@ Coalition is looking for other Assembly members to introduce budget requests for transgender wellness and equity funds in different state departments.

"Ideally, someone would help with the other four but it's not guaranteed," Pulido said. "Santiago is the only one who has agreed to carry an ask."

Gerstle said that there are two other proposals for funding that are being fleshed out, but that Santiago's office has not been appraised of who is going to make those budget asks.

The two other budget requests are one for $20 million for data collection efforts for "TGI people's experiences with housing, health care, education, immigration detention, and other institutions," and $25 million for "the Board of State and Community Corrections to be distributed as a grant to transgender-led organizations across the state to develop and implement re-entry programming," Gerstle said.

As the B.A.R. reported December 30, Santiago is facing a gay opponent, Godfrey Santos Plata, in the March 3 primary. Plata, also a Democrat, is an educator who emigrated as a child from the Philippines. If elected he would be the first out immigrant elected to the Legislature.

It's important that trans people can interact with services that cater to them because TGI people face such systemic discrimination and ignorance in society, even in fields where it is illegal in California such as housing and employment, Pulido explained in a phone interview with the B.A.R.

Pulido said that the coalition has identified the departments of public health and health care services, and the aforementioned corrections board as appropriate departments to have their own transgender wellness funds.

The coalition has not determined which departments should house the other funds, Pulido said, though one will relate to housing and another to employment.

Pulido said that Santiago's proposal is "one component of a larger ask" — the fund directly related to the department of health care services.

Pulido said that the coalition, which had a similar request in 2019 but made it later in the year, also met with the staff of state Senator Maria Elena Durazo (D-Los Angeles).

Durazo said she is willing to work with the coalition.

"I think the work of the TransLatin@ Coalition is really important," Durazo said. "A couple of years ago, I was able to go to their office and see what services they offer. They offer practical services, especially to trans immigrants, which is important to me because I've been around immigrants my whole life.

"Of course I support funding for trans-led organizations," Durazo added.