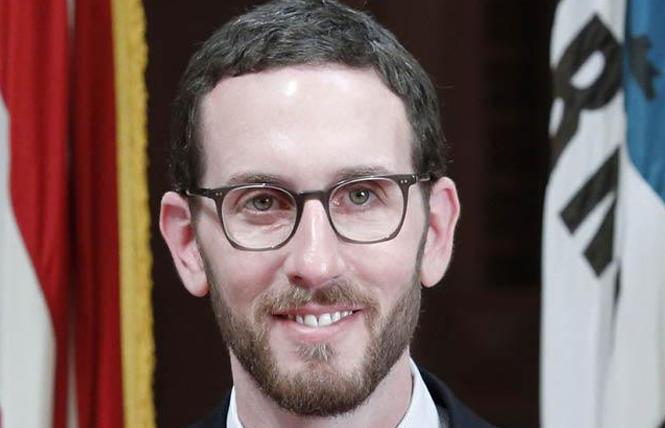 Gay state Senator Scott Wiener (D-San Francisco) is introducing legislation Thursday to direct the secretary of the state Department of Health and Human Services and the chief of the State Office of AIDS to implement a statewide, integrated response to the HIV, sexually transmitted infections, and hepatitis C epidemics.

Separately, the coalition is seeking $5 million for the state's syringe supply clearing house.

"We are introducing this bill to elevate the issue because it's really important for the state of California," Wiener said in a phone interview with the Bay Area Reporter January 14. "This requires multi agency collaboration to put into place a plan to end new infections in California, not just HIV but STIs," also known as sexually transmitted diseases.

"The bill does not contain an appropriation. It is about setting policy," Wiener added, meaning he's not seeking state funds right now.

The bill requires the AIDS chief and the HHS secretary to set goals and "identify recommended programs, policies, strategies, and funding for achieving these targets," according to a fact sheet provided by the senator's office.

The officials will also be required to submit an annual report on their progress from 2021 through 2030, according to the fact sheet.

The San Francisco AIDS Foundation helped Wiener's office craft the bill, according to Wiener and Anne Donnelly, the director of state health care policy with SFAF.

"Obviously, we are deeply grateful to Senator Wiener for taking this on as a champion. We are thrilled he is taking leadership on such an important piece of legislation," Donnelly said in a phone interview with the B.A.R. January 14. "We'd been in discussion on this for some time."

SFAF is a part of End the Epidemics, a statewide campaign made up of a coalition of numerous organizations seeking a California response to the diseases similar to other states such as New York and Washington, according to Dana Van Gorder, executive director of the Spahr Center, which helps LGBT seniors in Marin County.

End the Epidemics helped Wiener's office with particulars in the bill.

"We are all thrilled with Senator Wiener for doing it," Van Gorder said of the proposed legislation. "It's unfortunate that the governor didn't take the opportunity and needs to be nudged. We're glad Senator Wiener is nudging. Hopefully (Newsom) will sign the bill and then we move along."

The work by End the Epidemics comes as members of the group are growing frustrated that Governor Gavin Newsom's office has not responded to a recent letter it sent asking him to endorse a statewide, integrated response, Donnelly said.

"We are disappointed," Donnelly said in a phone interview with the B.A.R. January 6. As of this week, he still had not responded, she added.

The letter had been sent December 19.

Newsom is familiar with HIV/AIDS, hepatitis C, and STI issues. As San Francisco mayor, he rejected a proposal from local health officials that would have seen $3 million cut from AIDS services. In his first year as governor, he signed bills allowing Californians to obtain a two-month supply of PrEP without a prescription. (That program is expected to begin this summer.)

Last year, he said he was open to a statewide HIV and STI plan. But he has yet to announce a proposal.

"It was our hope that Governor Newsom would take the HIV issue under his wing," Van Gorder said in a phone interview with the B.A.R. January 7. "In the last year, he has approved additional funding, but the coalition has found it difficult to engage with him and his office in a meaningful effort."

The coalition asked for $60 million be allocated for HIV, STI, and hepatitis C prevention in the budget for Fiscal Year 2019-2020, as the B.A.R. reported last February, but the budget ended up including only $5 million for each, or $15 million, Van Gorder said.

In his budget proposal announced January 10, Newsom asked for the $15 million included in the 2019-2020 budget to be extended 18 months, meaning the money can be spent over a longer period. Newsom proposed a $222 billion state budget.

"The money would have 'sunsetted' on December 31, 2021," Corey Egel, a spokesman with the California Department of Public Health, wrote in an email to the B.A.R. "Given this budget action, those resources will be extended 18 months from that date."

It is not known how much of that money has been spent; Egel said Tuesday that he was processing the B.A.R.'s request for that information.

On Thursday, the California Department of Public Health said that for the STD and hep C allocations, the agency held several webinars last summer and fall with stakeholders to discuss the criteria to determine eligibility and distribution of the funds.

The allocation for HIV funds is going through a competitive request for application process. CDPH stated that it received 55 applications from a variety of community-based organizations and local health jurisdictions. It expects to post a notice of intent to award funds on its website by February 5. 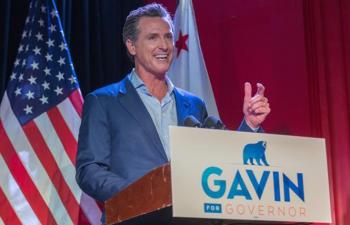 Newsom has yet to name a permanent head of the state AIDS office. Marisa Ramos, Ph.D., was tapped by Newsom last February to lead the office on an interim basis. She had previously held that role, but stepped down for a time due to a bureaucratic issue that was later resolved.

As the B.A.R. previously reported, the coalition contacted Newsom with a community consensus statement in March 2019. Over 100 organizations from across the state signed on, and it appeared Newsom was open to a statewide plan then.

"We are disappointed that you have not publicly endorsed a statewide initiative to end these epidemics as you committed to doing during the campaign," the letter states. "We are greatly concerned that these actions will fail to have their desired impact without increased political support, inter-agency collaboration, and new resources to fully implement the plan."

Advocates are also seeking improved access to health care and want to align agencies fighting HIV, hepatitis C, and STIs such as syphilis, gonorrhea, and chlamydia, saying they are not three epidemics but one.

Dr. Alisson Sombredero, the new chief medical officer at the San Francisco Community Health Center, a signatory to the letter, has worked as an HIV specialist for decades. She said that there are such high rates of co-infection of HIV and other STIs that they should be thought of as a syndemic, or series of linked health problems.

Often, the presence of one infection makes an individual more susceptible to others.

"I consider HIV, hepatitis C, and other STDs as a syndemic because the three disease clusters can be found as coinfection and each of these diseases pose a risk factor for acquiring the others," Sombredero wrote in a December 30 email to the B.A.R. "Data from several major cities throughout the country indicate that an average of four in 10 (men who have sex with men) with syphilis are also infected with HIV.

"People might think in the era of PrEP other STDs will not be so important as all are curable, but San Francisco is a city with very high access to PrEP, contrary to other counties in California where access is very limited," she added.

There were slightly fewer diagnoses of HIV infection in California in 2018, the most recent year for which numbers are available, compared to 2017 — 4,402 versus 4,772, according to statistics from the Centers for Disease Control and Prevention.

San Francisco made headlines last year when Mayor London Breed and the Department of Public Health announced the city had its fewest number of HIV cases in 2018 ever reported — 197 new HIV diagnoses that year, a 13% decrease from the 227 in 2017.

STDs
But the number of bacterial STDs has risen. In California in 2018, syphilis was up 265% compared to 2008, gonorrhea cases were up 211%, and chlamydia cases were up 56%, according to statistics from the CDC.

"There's a number of factors you can attribute this (the general rise of bacterial STDs) to," said Sergio Morales, director of sexual and reproductive health programs at Essential Access Health, which signed onto the December 19 letter to Newsom. "Reporting STDs more — that may account for some of the increase we are seeing. But cuts to public health funding have contributed to the spike in rates.

"The state budget has included limited investment, but doesn't have the resources needed to really stem the tide of epidemics," Morales added.

Essential Access Health has an STD prevention center and works with county health departments around the state.

Morales said that individuals should use condoms and ask questions to be better informed, but stressed the need for collective action.

Hep C
Hepatitis C advocates are hoping the public can be better educated about how the virus that causes it spreads, according to Robin Roth, the founder and co-chair of the San Francisco Hepatitis C Task Force (a signatory to the letter).

"It's time to take a holistic view of the epidemics because there is so much co-infection," Roth said.

Roth said that people often think that the cure for hepatitis C is so painful that living with the disease is better. What they might not know is that Gilead Sciences Inc. came out with a medicine with a high cure rate — sofosbuvir, sold as Sovaldi — in 2013. She said that her organization is dedicated to "tearing down the myths."

Another myth is that the vaccination for the hepatitis A and B viruses protect against the hepatitis C virus, which is not true, Roth said.

Newsom's office has not responded to a request for comment as of press time.

The California Department of Public Health Office of AIDS declined to comment for this story.

Updated, 1/16/20: This article has been updated with information from the California Department of Public Health.