Leather or bust: Sipping up suds at Sunday's 'gay church' 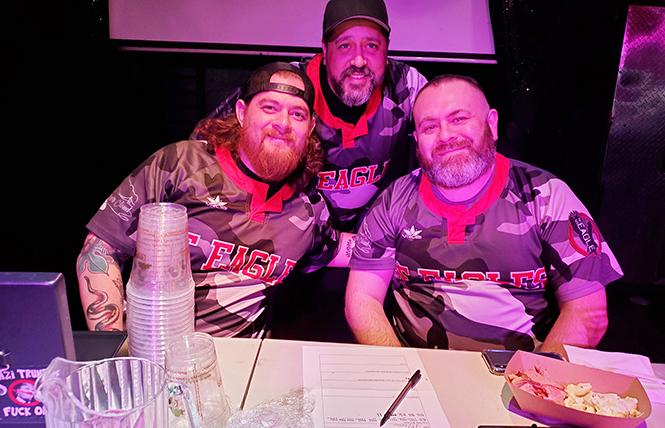 Ask a local San Francisco leather person what they're doing on a Sunday afternoon and you'll often here them say they're going to the beer bust. In my circles that typically means the weekly Sunday SF Eagle beer bust, but other bars have their own versions as well. 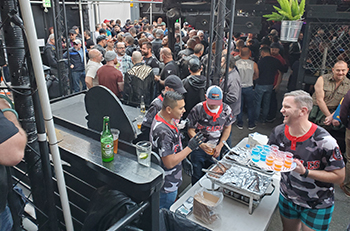 Food and jello shots are standard fare at SF Eagle beer busts such as this one benefitting the SF Eagle softball team. photo: Race Bannon

Hanging out at the Eagle on Sunday afternoons is one of my favorite weekend pastimes. Even before I moved to San Francisco in the mid-'90s I would attend the Eagle beer bust as part of nearly every visit to this wonderful city. Once the city became my home, it's been great to be able to attend more regularly.

To give those who've never frequented such a beer bust a sense of how important many feel it is to their queer and kink lives, going to the beer bust is sometimes referred to as going to "gay church." Beer busts can serve a similar communal function as a church.

People from all walks of leather life and beyond gather to hang out, share the week's stories, catch up with friends old and new, and revel in an atmosphere that celebrates both their queerness and their kinks, all while enjoying a libation and perhaps some food at a relatively rare daytime bar event. Those who don't drink beer have the option of soda instead of beer and you can often purchase food as part of the bust as well. 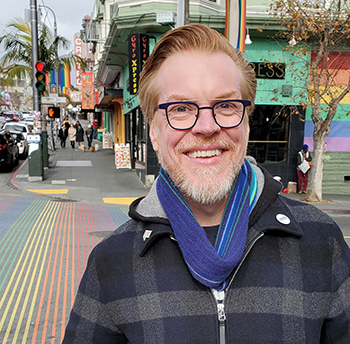 In addition to being a fun time, a portion of the proceeds from each Eagle beer bust benefits one of the many worthwhile Bay Area nonprofits. I was at the last two beer busts. One benefitted the SF Eagle softball team and the other raised funds for Tenderloin Tessie, an organization that for more than 40 years has fed the community of San Francisco on Easter, Thanksgiving and Christmas. Over the years the beer bust has raised hundreds of thousands of dollars for many LGBTQ and local charities.

I asked Jason Husted, the SF Eagle's Administrative Assistant and Beer Bust Coordinator, how a local nonprofit might sign up to receive benefits from a Sunday beer bust.

Jason outlined for me a fairly simple process. You email sfeagle.beerbusts@gmail.com and Jason will reply to your request with agreement details and an application for your group to complete. Part of the application includes your group's most desired dates. Jason then checks their scheduling calendar and if a date is available, Jason schedules that date for your group.

Your group must be a 501(c)(3) and provide their tax ID information or already have that information on file with the Eagle.

Not only can a local nonprofit receive a portion of the financial proceeds from the beer bust, but the social connections and visibility come from being the official beneficiary raises the group's profile and mission. 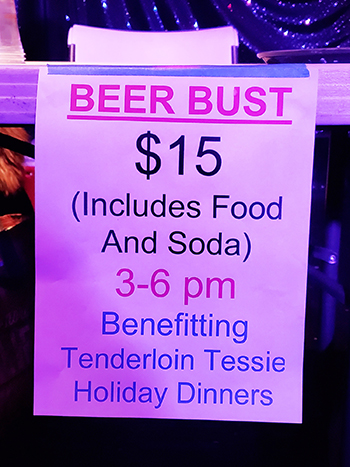 When I asked a random sampling of people attending the last couple of beer busts why they attend, I got a variety of answers. Some pointed out that on warm days the shirts often come off and there is always a lot of flirtatious friskiness happening.

Some lauded the fact that it's a social event they can attend during the day, an advantage for people who work night hours or aren't late-nighters. The large outdoor patio appeals to some who like being able to drink and socialize in the sunshine. Yet others mentioned the diversity of the crowd.

One of our local leather community's longstanding and more active members, Jay Harcourt, mentioned to me how the SF Eagle's beer bust helped him better enter the local scene comfortably.

"When I was first exploring my kinky inclinations, the beer bust was a safe place," he said. "I could wear what little leather I had at the time while mingling with a wide cross section of kinky and non-kinky people. It was my way of safely discovering my kinky self without external or self-judgment. It allowed me to make inroads socially and culturally into leather, a community of which I now feel an integral part and where I feel entirely at home."

The beer bust has carved out a long history in San Francisco gay men's and queer entertainment culture. I hope it survives as the valuable cultural institution that it's become.

Most Sundays when I'm in town, you'll find me at the Eagle. If you haven't checked it out, I recommend you do. It's every Sunday from 3pm to 6pm. Having such a place where you know you can gather any Sunday afternoon of the year is a great gift to our city and I'm grateful the Eagle has sustained this popular tradition.