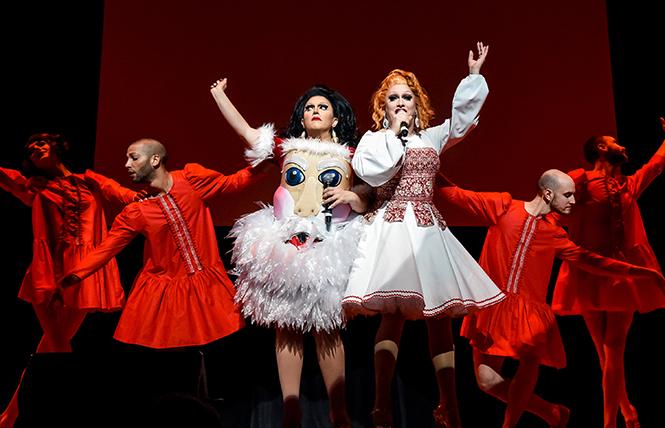 Drag superstars BenDeLaCreme and Jinkx Monsoon will join forces onstage on December 28 at the Victoria Theater for a post-Christmas Christmas show. The show is part of a national and UK tour that the pair are undertaking under the banner of BenDeLaCreme Presents, DeLa's newly formed production company.

DeLa and Monsoon, both RuPaul's Drag Race alumni who live in Seattle, are close friends who have been working together for years. Their new show, All I Want For Christmas Is Attention, promises to offer the audience a little song and a lot of eggnog. DeLa claims to be all sugar, while Monsoon says that she's all spice. The Bay Area Reporter spoke to Jerick Hoffer, Monsoon's alter ego, about who the character is.

"I think of Jinkx as a failed actress," Hoffer said. "She always wanted to be a big movie star, and never made it. So she started doing drag cabaret work, because that's the work she could get. Jerick the artist has done well with drag cabaret. Jinkx the character will always be failing in life."

Hoffer also spoke of how their Drag Race experience influenced them. 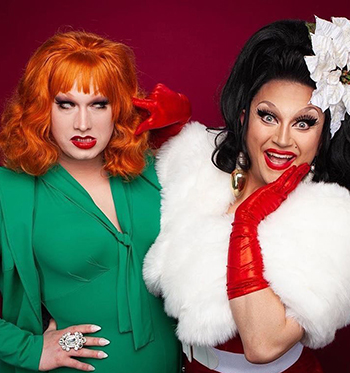 "It was very stressful, it was a lot of hard work, but I think it was one of the most profound experiences of my like," they said. "It caused me to focus in on what I'm most passionate about and helped me hone in on what I wanted to be as an artist and as a performer. I like creating work that is entertaining first and foremost but that has substance and a mission statement and meaning behind it. I like to come up with really stupid ideas of what I think would be entertaining, and then back up those ideas with my rhetoric, my beliefs and my world view and try to make the world a better place than when I found it through entertaining and enlightening my audiences."

Hoffer recalls RuPaul as a person with an "amazing" sense of humor who "gets every reference ever."

"When working with Ru, I can't make a reference to a movie without Ru knowing the reference," Hoffer said. "If I quote a line from a movie, Ru knows the line that comes after that. That's one of my favorite things about Ru."

Hoffer noted that RuPaul often has to walk a fine line between being on the show and producing the show. She's always got to be thinking about the business aspect of being on the TV show.

Hoffer appeared on season 5 of Drag Race, and was thrilled when alter-ego Monsoon won. They now recall the experience as "surreal, and now refers to it as a "wild drag dream that came true." 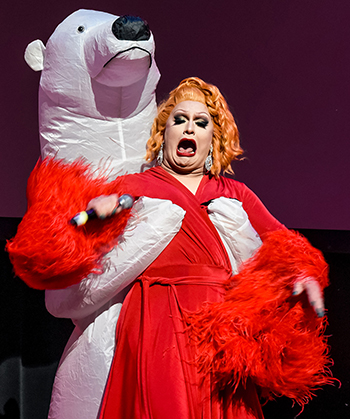 Hoffer considers friend and co-star BenDeLaCreme to be "brilliant," and feels that she is the best drag queen in Seattle.

"We share a mission statement," they said. "We both have very similar goals as artists, and that is to be entertaining, while also being informed and informative. And I find that DeLa thinks really hard about everything she puts out there, and she examines her work from every angle to make sure that the work she's putting on stage is something that she believes in and can back up and she can support no matter what. And that is considerate and thoughtful in taking into account everything that is going on in the world and making sure that she is contributing to the solution rather than to the problem."

"Through working with each other throughout the show they come to a mutual conclusion at the end of the show," Hoffer said. "But I can't give that part away."

The show features original music written by DeLaCreme, Monsoon, and Monsoon's music partner Major Scales. There are both original songs and parody songs. There will also be dancing, and the entire show is comedy-based.

Hoffer also spoke of their commitment to not being silent in the current political climate, noting that the administration was trying to undo all the progress made regarding LGBT rights, women's rights, and issues pertaining to people of color.

"There are people who feel that their way of life is under attack because we're asking for fair and equal treatment for all American citizens," they said. "When you say 'Make America Great Again,' you have to remember that it only started being tolerable very recently."

Hoffer has a message for those who are unfamiliar with Jinkx Monsoon or BenDeLaCreme and are on the fence about coming to see All I Want For Christmas Is Attention.

"If you have anything about this holiday season that you're kind of dreading, if seeing your family for Christmas Day or organizing a big family dinner or gift exchange, if any of that stuff is stressing you out or causing you anxiety come see our show and we'll show you how to put it in context," they said. 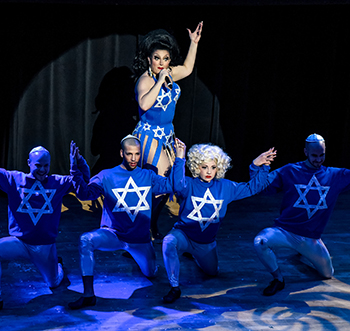 Ben d'and snap
BenDeLaCreme, who markets herself as "sweet as pie and sharp as cheddar," spoke to the B.A.R. briefly about who she is.

"Ben the artist and DeLa the character are slightly different creatures," she said. "DeLa's whole personality is sweet, bubbly, over the top, and optimistic, but she's also smart. Underneath all of my writing and everything I like to put out there, I value research and intelligence and social commentary, so I use her sweetness and sometimes her naiveté to get that out there. Sometimes she doesn't know what she's talking about, but the audience knows what I have to say through her."

DeLa recalls Drag Race as a huge event in her life. She had been doing drag for 16 years, but having this huge national platform changed everything, making it possible for her to make a good living doing exactly what it is she wanted to do.

"That is the greatest gift of Drag Race," DeLa said. "Getting to have the means to really do what you do and heighten yourself as a performer."

The success of appearing on Drag Race may have paved the way for BenDeLaCreme Presents, DeLa's production company.

"It's exciting to be the force behind a production company that not only helps get drag and queer performance out into the world, but is run by a drag queen," DeLa said. "Who cares more about putting the height of drag work out there besides somebody who's dedicated their life to the form? I feel really proud and excited to be a self-producing performer. I get to have the final say on every aspect of what we are putting on stage. I feel really proud of the work--we never put anything out into the world that's any less than our best."

DeLa describes All I Want For Christmas Is Attention as a tongue-in-cheek nod to the way they are choosing to spend the holidays by gathering people from all over the world to come to their show, stare at them and clap.

"But the heart of the show is what we really want for Christmas is community," they said. "We're gathering people all over the world to come together and to talk about the fact that the holidays can be a difficult time. It's very fun, there's a lot of comedy and song, and we have a great time. But the real heart of it is that the holidays can be a hard time for the queer community and many people who don't have access to all the things that are supposed to make the season merry and bright. But we all can create a space in this community together within the confines of this theater, and that's the truth of this show."