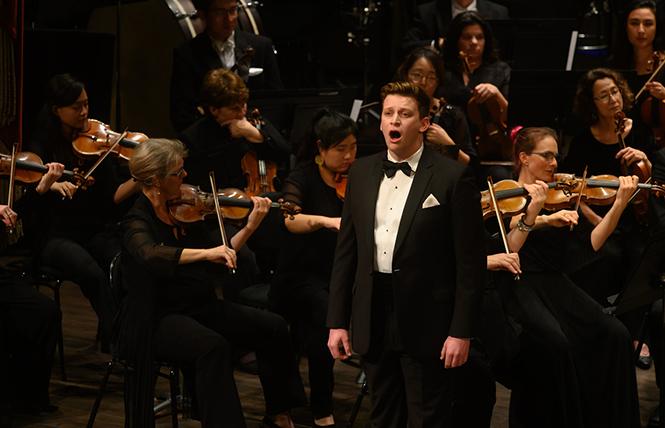 It might seem impossible, but last week's "The Future Is Now: 2019 Adler Fellows Concert" at Herbst Theatre was more special than ever. One day following the announcement of her new position as Music Director of the San Francisco Opera, Eun Sun Kim took the podium to conduct the SFO Orchestra in the keenly anticipated annual display vehicle for the crème de la crème of singers from the Merola Opera Program. The audience welcomed Kim with a warm ovation. With grace and sensitivity, Kim quickly turned to business. Bernstein's Overture to "Candide" set the mood for a brilliant night of singing by gifted young artists.

Elegantly dressed, 10 first- and second-year Fellows soon appeared, singly and in pairs. Two pianist-coaches, Kseniia Polstiankina Barrad (Kiev, Ukraine), 1st-year AF; and Cesar Canon (Bogota, Colombia), 2nd-year AF, accompanied occasionally. In a range of arias and songs from various operatic genres, the fresh-faced stars of tomorrow exhibited their talent before a packed house of enthusiastic supporters. Merola and Adler events are always at a high artistic standard, but this year's participants are exceptional.

A traditional concert format, with some sparing use of hand-held props, moved the program along briskly. Even after 2½ hours, I got the feeling nobody would have minded a few encores. The contrast between first- and second-year AFs was often noticeable, but everyone earned their place in the line-up, and as with most Adler concerts, there were some delightful surprises.

Countertenor Aryeh Nussbaum Cohen (Brooklyn, NY), 2nd-year AF, has been a break-out star from the beginning, and assignments at SFO and abroad put him on the radar of prestigious houses worldwide. His Adler Concert selections included exquisite Handel and Mozart, and a heartbreakingly gorgeous Berlioz song.

Who would have guessed mezzo-soprano Ashley Dixon (Peachtree City, GA), 2nd-year AF, would also have some expert Handel up her sleeve? Strong performances at SFO alerted us to her bright, warm sound, but Dixon's flawless coloratura in an aria from Handel's "Ariodante" showed a whole new world of vocal possibilities. Her love duet from Massenet's "Cendrillon" with pure-toned tenor Christopher Oglesby (Woodstock, GA), 2nd-year AF, was sweetly believable. Oglesby's beautiful aria from Tchaikovsky's "Iolanta" allowed him a shining solo.

Bass-baritone Christian Pursell (Santa Cruz, CA), 2nd-year AF, has proved his Handel chops in performances of "Saul" with Philharmonia Baroque. He also created excellent portrayals at SFO, most notably in "Billy Budd" and as Walter Raleigh in "Roberto Devereaux." His selections for the concert revealed a maturity of interpretation and flashing wit that suited his moody aria by Rachmaninoff from "Aleko" and a sexy strut through a soldier's bragging song from a comic opera by Ambroise Thomas.

Soprano Natalie Image (Tsawwassen, Canada), 2nd-year AF, also moves confidently and is at ease with comedy and drama. Her rich voice has just enough edge to add personality. Her aria from Mozart's "Idomeneo," accompanied on harpsichord by Barrad, was eloquent. She also closed the show with a delightful "Par le rang, Salut a la France" from Donizetti's "The Daughter of the Regiment." Coming from the aisles, Image's collegial Fellows joined her for high-fives and emotional hugs and kisses.

Other sparkling contributions from 1st-year AFs gave a foreshadowing of next year's "graduation" concert. Soprano Mary Evelyn Hangley (Long Beach, NY) was impressive in "Tatiana's Letter Scene" from "Eugene Onegin." Her lovely voice is ready for the taxing part, and another year as an Adler Fellow will add deeper dramatic conviction. She also appeared in an urgent duet from Verdi's "Don Carlo" with tenor Christopher Colmenero (Burlington, VT). He had his strong solo moment in the second half with an aria from Massenet's "Le Cid."

Mezzo-soprano Simone McIntosh (Vancouver, Canada) was fiery in an excerpt from Mozart's "Lucio Silla," accompanied by Canon on harpsichord. Her amusing duet with tenor Zhengyi Bai (Linyi, Shandong, China) from Rossini's "Le Comte Ory" drew appreciative laughter. Bai had the unenviable task of opening the concert alone with a very difficult aria requiring a stratospheric high note. He made it.

Tenor SeokJong Baek (Jeon-Ju, South Korea) is another full-throated singer who has played the main stage at SFO in numerous roles. He nailed his aria from "Tosca" on the first half, and returned later for a tender aria by Cilea.

SFO generously and intelligently gives strong support to generations of Adler Fellows. Immersive training in everything from acting to diction and stage movement also provides insurance for the future of the art. The latest Adler Fellows Concert proved the valuable dividends.