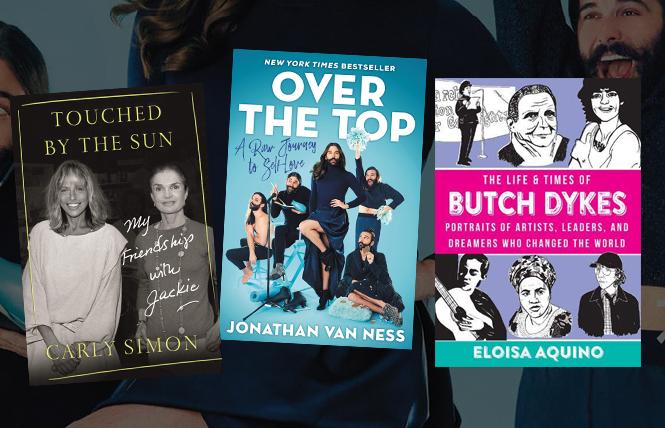 Memoirs and memories: A follow-up to Carly Simon's acclaimed 2015 memoir "Boys in the Trees," "Touched by the Sun: My Friendship with Jackie" (FSG) is an intimate, affectionate portrait of the singer-songwriter's comradeship with "Jackie" Bouvier Kennedy Onassis. It includes details of Simon's 1980s-90s life, including her marriage to Jim Hart, who came out as gay.

Fans of the second iteration of "Queer Eye" on Netflix have their favorite style experts, and Jonathan Van Ness ranks near the top. Van Ness' memoir "Over the Top: A Raw Journey to Self-Love" (Harper One) is a no-holds-barred look at his life from his Quincy, Illinois roots to international stardom.

"The Life & Times of Butch Dykes: Portraits of Artists, Leaders and Dreamers Who Changed the World" (Microcosm) by Eloisa Aquino originated as a "beloved series of tiny zines" from the 2000s. It features a splendid array of queer heroes who loved women and resisted feminine roles, including Audre Lorde, Chavela Vargas, Martina Navratilova, and Gertrude Stein.

Theater queens are sure to enjoy "To the Max: Max Weitzenhoffer's Magical Trip from Oklahoma to New York and London and Back" (U. of Oklahoma Press) by Tom Lindley, which follows the personal and professional journey of Weitzenhoffer, an Oklahoman who became a Tony Award-winning Broadway producer and London theatre owner.

You know the saying, "It's funny because it's true?" That applies to the wicked-funny adult-oriented children's book "Fuck, Now There Are Two of You" (Akashic Books) by Adam Mansbach, with illustrations by Owen Brozman. A sequel to 2011's "Go the Fuck to Sleep," the new book features a same-gender couple.

More creative writing: Joint winner of the 2019 Booker Prize, "Girl, Woman, Other" (Black Cat/Grove), the novel by Anglo-Nigerian author Bernadine Evaristo, is experimental as it interweaves the stories of 12 central characters, including "a nonbinary social media influencer" and a 93-year-old woman living on a farm in Northern England.

Renowned for his poetic approach to the life of the downtrodden, gay poet in rural Pennsylvania Jeff Walt's new full-length collection "Leave Smoke" (Gival Press) includes "In Bed I Run the Calluses on Your Palm," "That Norma Jean Next to Me at the Alibi," and "My Brother on the Graveyard Shift."

In her eighth book "Somewhere Along the Way" (Bold Strokes Books), lesbian writer Kathleen Knowles takes the reader back to 1981, when Maxine and her gay bestie Chris relocate to SF from the Midwest. Each of them faces new challenges that lead to their estrangement, the loss of a life and a quest for redemption.