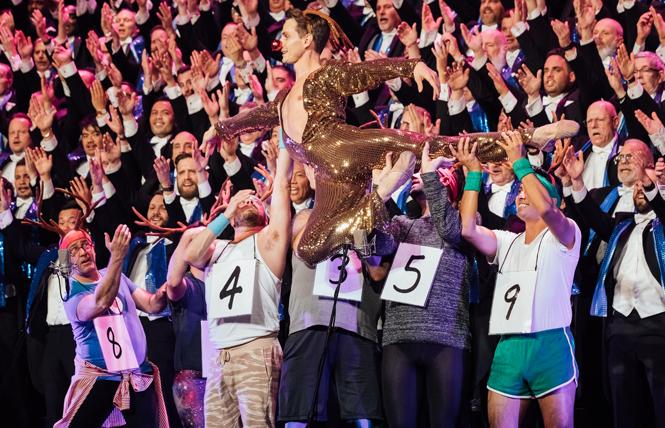 The San Francisco Gay Men's Chorus is riding high. They're just coming off the release of the new documentary "Gay Chorus Deep South," which followed their goodwill tour of the Southern US, a tour that attracted a fair amount of press attention. Now the Chorus prepares to celebrate the holiday season as they bring their annual extravaganza to the Sydney Goldstein Theater (formerly the Nourse Theater), followed by three Christmas Eve performances at the iconic Castro Theatre. The Chorus' artistic director Dr. Tim Seelig spoke to the B.A.R. about the shows and about their hectic schedule.

"It has been quite a year," Seelig said. "Thank goodness the tour was in 2017, so we've had a little break from such a huge undertaking. The film had its world premiere at Tribeca this May, and has been on quite a roll. We had singers perform at Tribeca, Outfest in L.A., and of course Frameline. But once August started, we were full into preparations for the holiday."

The show at the Sydney Goldstein, which performs on Dec. 6 & 7, is called "Holigays Are Here: Ring Them Bells." Seelig briefly addressed the importance of the chorus continuing to be so visible in the current political climate. 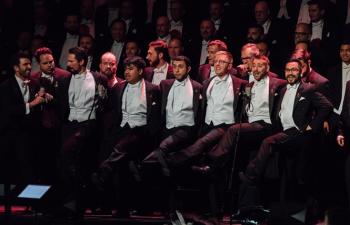 "We feel really fortunate that the Chorus is able to continue to push the political conversation with our music," he said. "Certainly the tour has done that, literally bringing the Chorus' message all over the world, and that will continue. We are excited to be commissioning the first work telling the stories of Gen Z LGBTQ youth for the Spring. It brings new topics to the stage that we have not touched before. But more on that later!"

"Holigays Are Here" will be the new standard title of the Chorus' Christmas spectacular each year, with a tag line to define each show's themes or specialty act. Seelig explained why this year's show is subtitled "Ring Them Bells."

"Everybody loves bells at the holidays, from cable cars to Grace Cathedral's Carillon," he said. "'Jingle Bells' is an all-time favorite, of course. My first holiday concert nine years ago we featured the professional bell quartet Velocity Bells. They were spectacular. They have grown. This year, we welcome the 12-member Velocity Bells. There is little more festive than bells at the holidays, and they accompany men's voices amazingly, providing the musical icing on top. We've added to that original commission of some fabulous songs about bells, such as a men's chorus arrangement of Liza Minnelli's hilarious 'Ring Them Bells.'"

There will also be choreography, no mean feat, considering the fact that the show will feature 275 singers on stage. Seelig says singers dance at every concert, usually after singing two or three songs. He admits it's a bit of a challenge to get 275 men to dance on stage all at once, but it's also great fun, and the audience loves it. The show will also feature a special new arrangement of the holiday classic "Silent Night."

"The new arrangement of 'Silent Night' is by one of the most extraordinary composers of our day, Dan Forrest," said Seelig. "He has created magic with ascending scale patterns throughout the song, lifting it from what might be a ho-hum arrangement to heaven. The walking pattern is played by the bells."

The show will also feature several solo performances. He promises the solo acts will include a "swoon-worthy" rendition of "Our First Christmas," a song about a gay couple spending their first holiday together.

In addition to the full-scale extravaganza at the Sydney Goldstein Theater, the Chorus returns to the Castro Theatre on Christmas Eve, Dec. 24, for three shorter, smaller-scale but still excitingly beautiful shows. The Castro shows are at 5, 7 and 9 p.m.

"There is no other show in San Francisco that can cover all the bases," said Seelig. "From gorgeous choral works to the hilarious antics that only the gays can pull off. There is no other holiday offering in town that will envelope you as you walk in, inviting you into our huge LGBTQ family. We'll wrap you in our music arms and make you laugh until your sides hurt."