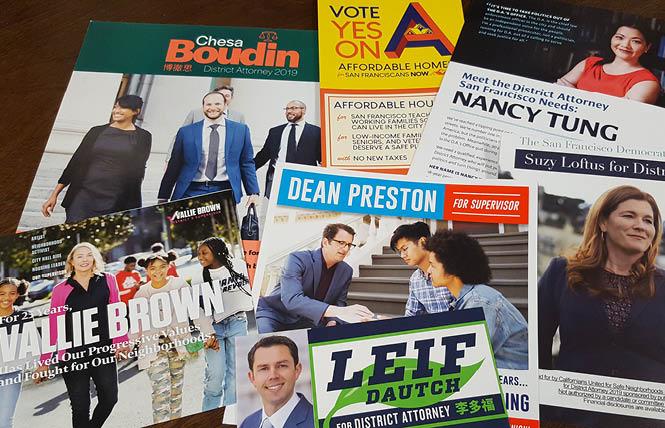 This year's largely overlooked San Francisco municipal elections will come to a close Tuesday night with Mayor London Breed all but assured of securing a full four-year term. The only real excitement for local political junkies will be if all four of the women Breed appointed to fill vacancies over the last 15 months pull off victories in their races.

District 5 Supervisor Vallie Brown, appointed by Breed as her successor representing the Haight and Fillmore, is fending off a strong challenge from tenants rights activist Dean Preston. He came close to winning the seat in 2016 when he ran against Breed, who resigned as supervisor after being elected in June 2018 to serve out the remainder of the late mayor Ed Lee's term.

Also on the ballot are film producer Nomvula O'Meara and Ryan Lam. The victor will serve out Breed's supervisor term through next year and need to seek a full four-year term next November.

Interim District Attorney Suzy Loftus, appointed to the position mere weeks ago by Breed due to George Gascón resigning in order to run for district attorney in Los Angeles County in the March 3 primary, is in a four-way race to be the city's top law enforcement official through 2023. Her closest challenger is Deputy Public Defender Chesa Boudin, who has faced a barrage of negative ads in the last weeks of the campaign funded by the police union, which has not endorsed a candidate in the race.

Community college board member Ivy Lee, appointed by Breed in July 2018 to serve out the term of Rafael Mandelman, who stepped down after being elected last year as the District 8 supervisor, is running unopposed. She will serve through the end of 2020 and has already stated she will not seek a full term overseeing City College of San Francisco. (She may instead seek the District 7 seat on the Board of Supervisors, as her boss, Board President Norman Yee, will be termed out of office next year.)

Facing two little known opponents is school board member Jenny Lam. She was appointed by Breed in January to serve out Matt Haney's term through 2020, as he stepped down following his election last fall to the District 6 supervisor seat. Lam is expected to easily defeat challengers Kirsten Strobel and Robert K. Coleman, setting her up to run next November for a full four-year term overseeing the San Francisco Unified School District.

Breed appointed Raju to his position earlier this year following the death of Jeff Adachi in February. He won't need to seek re-election to a full four-term year until 2022.

In the open contest for sheriff, due to Sheriff Vicki Hennessy's decision not to seek re-election, chief deputy sheriff Paul Miyamoto is the only person in the race. He has exerted little effort on campaigning for the seat and failed to meet with the Bay Area Reporter's editorial board last month, leading the paper to withhold its endorsement of his candidacy.

With few contested races, the ongoing impeachment proceedings against President Donald Trump, and a devastating fire season leading to widespread blackouts and conflagrations across California, the city's electoral contests have received scant attention ahead of the election Tuesday, November 5.

Loftus' surprise interim appointment brought a few days worth of coverage to the D.A. race. And a last-minute attack against Brown for evicting several African American tenants from a home she had bought decades ago with some friends has also generated headlines over the last few weeks.

Down ticket, a ballot measure aimed at overturning the city's ban on the sale of electronic cigarettes lost its major backer when the vaping company Juul Labs Inc. withdrew its financial support of Proposition C. The decision came as the news media focused on nationwide reports of people becoming severely ill from vaping, but not before the Yes on Prop C campaign flooded local airwaves and mailboxes with ads in support of the measure.

Breed has been prominently featured in television spots supporting Proposition A, the $600 million affordable housing bond she and the supervisors put on the ballot. Otherwise, most of the six local propositions before voters next week have drawn little notice. For those who have been following the elections closely, there are myriad options to watch the results come in Tuesday night.

Breed is joining forces with the backers of Prop A to host an Election Night party. The bash begins at 8 p.m. at the Swedish American Hall, located at 2174 Market Street in the Castro district.

A short drive away Brown will be gathering with her supporters at the quirky roller skating rink known as the Church of 8 Wheels, located at 554 Fillmore Street at Fell Street. The party goes from 8 to 11 p.m.

Preston, meanwhile, will be awaiting returns with his backers a few blocks away at the Noir Lounge, 581 Hayes Street near Laguna Street. His party will kick off shortly after the polls close at 8 p.m.

D.A. candidates
Two of the D.A. candidates will both be hosting parties South of Market come Election Night. Boudin will gather with his supporters beginning at 8:30 p.m. at the SoMa StrEat Food Park, located at 428 11th Street. Tung's party will go from 7 to 11 p.m. at 440 Brannan Street.

Dautch is having his party at the Marina restaurant the Dorian, 2001 Chestnut Street at Fillmore, starting at 8 p.m. He is asking people to RSVP online via https://bit.ly/2Nve9E1.

Loftus will have her Election Night party at Churchill, 198 Church Street, beginning at 8:30pm.

Updated: This article was updated to include Election Night party info for Suzy Loftus.