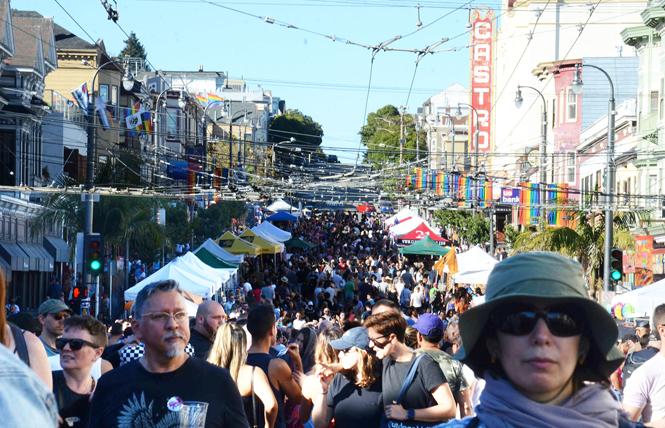 For the first time since 2016, the Castro Street Fair will once again include the block of Market Street between Castro and Noe streets.

"We heard from the public that Market Street was a classic way to experience the Castro Street Fair, and after a couple of years without, we decided to go back to it," said Fred Lopez, a gay man who was the fair's executive director last year.

That block will include the main stage, which last year was located on Castro Street between 18th and 19th streets.

Acts on the main stage begin at 11 a.m. and will include performances from the San Francisco Lesbian/Gay Freedom Band (the city's official band), CHEER SF, and Cindy Sparks.

Sparks, who is bisexual, is part of a group called Dolores Flow. Dolores Flow meets in Mission Dolores Park every week to practice and teach glow arts, juggling, and hula hooping.

"We are basically a group of friends. We've known each other for five years and want to share the bright and colorful magic we do at Dolores Park with the Castro Street Fair," Sparks said.

LGBT members of the group will be scattered around the fair.

"Look for the shiny rainbows around the whole fair with different DJs and performers," Sparks said.

Next to the Noe intersection will be a "world of wonderment" called The Midway.

"It's going to be a carnival atmosphere with a balloon pop and interactive games," said Jenn Meyer, a straight ally who's the president of the fair's board of directors.

The Midway is also set to include bean bag and can tosses and a "rocket race," according to the fair's website.

Meyer, who is the owner of the Local Take boutique gift shop on 17th Street in the Castro, said that many of the old favorite foods such as sausages and hamburgers will still be at the fair but that there are new additions this year, including a vegan food truck and paella, "which I'm really excited about."

The food will be on 18th Street between Collingwood and Diamond streets. There will be four locations to purchase alcohol on the streets, including at a stand adjacent to the food court.

The alcohol will include selections from Founders Brewing, Trumer Pils, and Spiked Seltzer.

Paying a $5-10 donation upon entering will get $1 off the purchase of alcoholic drinks.

Last year, the Castro Street Fair raised over $50,000 for community organizations. The fair also pays for the rainbow flag that flies above Harvey Milk Plaza.

For those looking for some political humor, the Harvey Milk LGBTQ Democratic Club will have its annual pie toss at the fair.

Club President Kevin Bard explained in a Facebook post that the club switched from a dunk tank due to tossing pies to be conscious of water usage.

Milk founded the Castro Street Fair in 1974, three years before his historic election to the San Francisco Board of Supervisors, as a way for the LGBT people who moved into the neighborhood that decade to become a closer community.

"Milk started this thing 46 years ago, and it's the longest continuous street fair in the Castro," Meyer said. "It was created to be inclusive and created as a celebration for people who, at that point, didn't have much to celebrate."