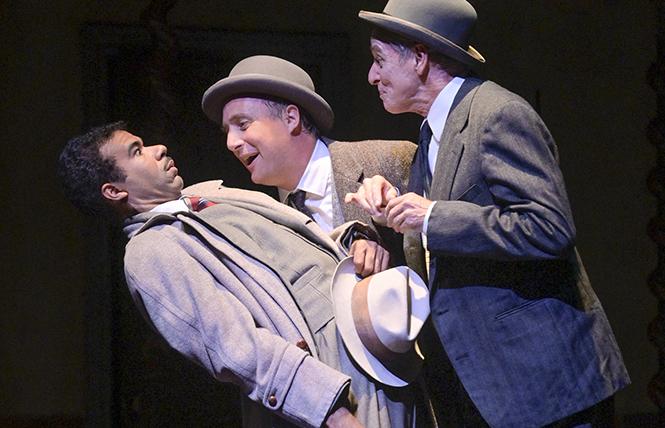 Richard Hannay (Lance Gardner) worries his identity has been discovered by two traveling salesmen (Cassidy Brown and Ron Campbell) in "The 39 Steps," presented by TheatreWorks Silicon Valley at the Mountain View Center for the Performing Arts. Photo: Kevin Berne

Now, I'll grant you that there's a certain mirth to the juxtaposition of images evoked by those words: a harp, a disco, a monikered mollusk; and there's a silly civic pride implied in rhyme. But unless you've first heard the rambling anecdotal wind-up — in which Sam and his pal Larry Lobster get separated by St. Peter at the Pearly Gates, Larry gets lonely in heaven and journeys to reunite with his pal in a mirror-balled underworld, etc. — it falls significantly short of knee-slapitude.

"The 39 Steps," now playing at TheatreWorks Silicon Valley, will be akin to that orphan punchline for most audience members: vaguely amusing and utterly pointless. If you take the trouble to watch Alfred Hitchcock's 1935 film adaptation of John Buchan's 1915 novel the evening before attending the stage version, it will prove considerably more ingenious (although not really much funnier). The movie is the set-up.

The play is an often-word-for-word recreation of the movie, a sweeping espionage chase flick, as it might be staged in a small British music hall with a troupe of four actors frantically switching characters, costumes and accents. When cast member Cassidy Brown, playing an adult, suddenly drops to his knees and turns into a scruffy paperboy hawking the evening news, it's amusing in a slapstick, vaudevillian way. But if you've recently seen the movie and realize that Brown is delivering his lines with the exact same vocal intonations as the kid in the film, you can appreciate the bit on multiple levels. Ron Campbell, a second quick-changing utility player, does similarly impressive work picking up and ever-so-slightly exaggerating the tones and expressions of dozens of characters, including the story's archvillain.

Among the most impressive elements of this production are some incredibly precise bits of folderol, scripted by adapter Patrick Barlow and flawlessly executed by director Leslie Martinson and her creative team, that leverage the differences between stage and screen storytelling. In an early scene, femme fatale Annabella (Annie Abrams, who plays all the young female roles, leaving the crotchety old ladies to her male castmates) is stabbed in the back, and as she dies, she hands dashing protagonist Richard Hannay (Lance Gardner, with a light-footed arrogance perfect for the role) a map, urging him to follow her directions and save England from sure disaster. On screen, there's a dissolve: Annabella's face, ghost-like, recedes into an image of the map as some of her dying words echo in Hannay's head at lower and lower volume on the soundtrack: "Quickly... quickly... quickly... quickly..." On the music hall stage, with no cinematic visual effects, Annabella's persistent repetition is quite funny if you've recently seen its movie counterpart, but perplexing otherwise. There's another bit in which, on film, a woman's scream at the end of one scene elides with a train whistle at the beginning of the next. It's a nifty detail to find repeated in a live setting, but without the visual impact of quick cutting, it's lost on most of the audience.

In one of Hitchcock's most acclaimed extended sequences, Hannay is chased atop the cars of a moving train. Suspenseful and thrillingly shot, it's the predecessor of a century of action movies yet to come. But all the pratfalls in the world can't translate a comparable kinetic rush to the stage, and there's nothing particularly funny in that impossibility. But the scene remains (lengthily so), more likely to elicit head-scratching than nail-biting in this iteration. While much of this production made me thankful I'd seen the film first, scenes like this made me wish I'd seen the film only.

But to be honest, unless you're a hardcore devotee of cinema history, I can't even recommend that. As technically advanced and cinematically fluid as it was for its time, the 1935 movie version of "The 39 Steps" feels clunky and antiquated today. As with the saga of Sam Clam's disco, it may not be worth sitting through the set-up for the punchline.