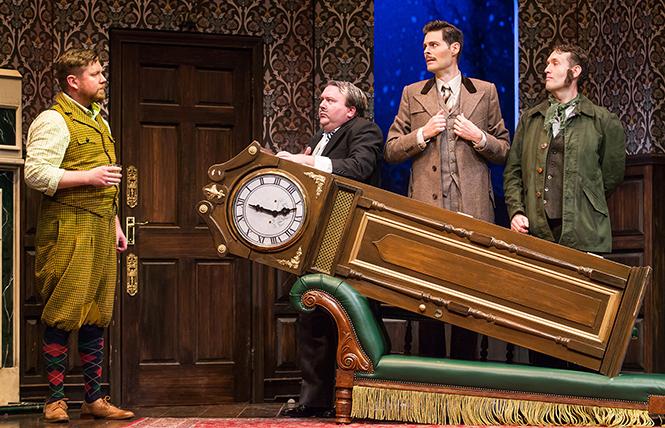 "The Play That Goes Wrong" cast in the national tour that played the Golden Gate Theatre in a short run last week. Photo: Jeremy Daniel

The arrival of farce and slapstick on Bay Area boards seems particularly well-timed for our historical moment. Unfortunately, the Mischief Theatre production of "The Play That Goes Wrong" that briefly occupied the SHN Golden Gate Theatre last week in a touring version both fit and missed the bill. Out There attended opening night.

The entire arsenal of farcical comedy — voluminous spit-takes, spirited pratfalls, prop and scenery fails, set-piece destruction, music miscues, acting atrocities — is well-represented in this play-within-a-play in which the Cornley University Drama Society puts on, or attempts to put on "The Murder at Haversham Manor," a creaky mystery that falls (and fails) from theatrical cliché to cliché. OT's heartiest laughs came when Drama Society head Chris Bean (Evan Alexander Smith), who also directs and stars as Inspector Carter, broke the fourth wall and berated the audience for not appreciating the play correctly. When the audience reacted, Bean snapped back, "Boo, huh? Well, boo, you!"

The plot is a lame murder mystery, but frankly when the audience can see the "corpse" move around stage on its own volition, the surprise and suspense are in short supply. The fun comes in when absolutely everything in a mismanaged theatrical enterprise that could possibly go wrong promptly does. Of course the irony is that what's presented as amateurism in acting, faulty scene and sound design, property mismanagement, etc., takes great control, coordination and precision, comic timing, etc., to pull off. So the very unprofessionalism they portray is what makes this company eminently professional. We were especially taken by Angela Grovey as hapless stage manager Annie Twilloil; Ned Noyes as clueless newbie Max Bennett; and Peyton Crim as Stanislavsky method actor Robert Grove. Broadly directed by Matt DiCarlo.

The gold standard for this kind of knockabout, slap-around farce is surely the classic "Noises Off," and though "Play That Goes Wrong" doesn't reach quite those heights, it mines much of the same territory. This is the kind of mindless entertainment that you once found in the West End "for the tired businessman"; we were having sex-farce flashbacks especially when Jamie Ann Romero, as Sandra Wilkinson, appeared onstage in a barely-there teddy for no apparent reason. It was all fun and games until everyone in the cast got hurt, but honestly the biggest laughs for OT came from the Drama Society's mock program-within-the-program, in which we learned that sound operator and Duran Duran fan Trevor Watson (Brandon J. Ellis) "is only participating in 'The Murder at Haversham Manor' to earn much-needed credit for his engineering course. Once he has passed the course, he will not continue to work with the Drama Society. Trevor credits his success to his sunny disposition and his positive outlook on life."