Soul-snatching & shape-shifting opera 'If I Were You' 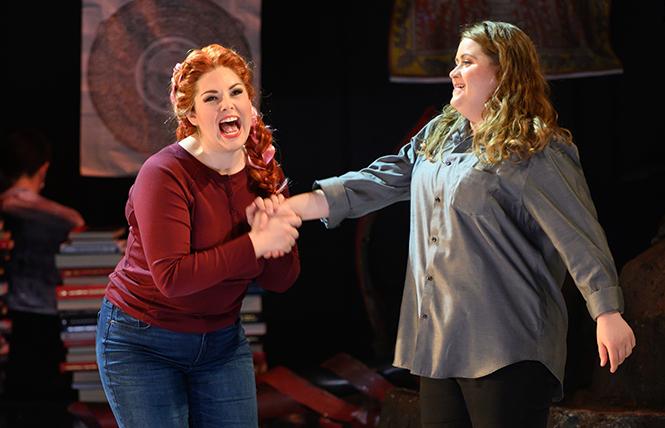 Cara Collins as Brittomara, a shape-shifting devil appearing here as a hairdresser, and Esther Tonea as Diana in the world premiere of "If I Were You" by Jake Heggie and Gene Scheer, presented by Merola Opera Program at the Herbst Theatre. Photo: Kristen Loken

Starting with a hook as catchy as anything in Puccini, composer Jake Heggie and librettist Gene Scheer's latest operatic collaboration received its world premiere at Herbst Theatre in San Francisco last week. Fulfilling the first-ever commission in the 62-year history of full training in the famous Merola Opera Program, "If I Were You" drew appreciative cheers from a packed house for Heggie's pulsing score, but left more than a few scratching their heads at the philosophical significance of Scheer's mood-shifting libretto.

Based on the novel "Si J' étais vous" by French-American author Julien Green, the opera is a complex story of longing for viable identity in a world filled with temptation. Told with plot devices drawn from the supernatural and characters ranging from ordinary to demonic, "If I Were You" is entertaining from start to finish, but sensible? Maybe not so much. It is dark, funny, scary, and strangely portentous; figuring it out is the tricky part.

The talented young performers, double-cast from this year's crop of talented Merolini, energetically portray inhabitants of "a small city," "Time: the present," with admirable conviction. They also sing uniformly well, which makes the plot more credible, despite its glaring holes.

Restless young would-be writer Fabian, portrayed on opening night by appealing tenor Michael Day (Rockford, IL), wakes from a terrible car accident attended by a strange EMT, "the Devil" in disguise. Brittomara, a shape-shifter who assumes many guises as the tale goes on, was brought to vivid life by mezzo-soprano Cara Collins (Amarillo, TX). Her strong singing anchored the part, and her acting defined the variety of superficial personalities she assumed.

Another important character, one who manages to keep her own identity, is lovely, cheerful Diana, "Not the virgin goddess," as she introduces herself. Soprano Esther Tonea (Buford, GA) kept her pure tone steady in a deceptively simple role, navigating a wide range of emotions. Diana falls for shy nerdy Fabian and tries to follow him, even after he has accepted Brittomara's Faustian offer to inhabit the bodies of others at will. He uses the eternal power by intoning a Sanskrit incantation from an ancient book. The price, of course, is his soul, and this is an early indicator of the libretto's increasingly iffy premise.

We have already suspended disbelief by accepting the devil exists and there is a soul that can be bargained for. Now we are asked to agree death and damnation will result from breaking the deal. I joined readily in the fun, until it dawned that Fabian was making virtually all of his choices only to get out of sticky situations, rather than to find some promising new identities. It also got me wondering about the real meaning of damnation and why he is so willing to risk it. To what exactly will he be damned, anyway? When Brittomara (Spoiler Alert!) exults at her final victory over Fabian, in an arioso equivalent of "I've got you now, my pretty," I thought: Okay, but for what? No time to answer, she's already off to her next victim.

If my French were better, I would tackle the novel. Maybe Julien Green's existential dilemma is lost in translation. Still, Scheer has turned an intriguing premise into a ripping yarn that unfortunately ends up feeling silly in contemporary context. If the story had remained in its original post-WWII setting, it might have been more pointed.

Composer Heggie's obvious affection for singers and expert tailoring to their abilities earned his smart commission for Merola, and he has delivered a typically accessible score. Filled with trademark melodies cut short before turning glib, soaring lyrical lines, and catchy rhythms, the music is also orchestrated with a kind of high-end-Broadway flair. Conductor Nicole Paiement, of extraordinary Opera Parallele, led the full 32-piece orchestra in a beautifully assured performance.

Heggie and Scheer's dubious usage of the word "Hallelujah" as a recurring motif and some outdated, cringeworthy writing for scenes in a biker bar were overcome by the fresh-faced cast. Even as lost souls parading in the shadows a la "The Walking Dead," the first of the two casts performed with professional confidence. They visually forced the more anachronistic writing into a feeling of current style.

Mezzo-soprano Edith Grossman (Elma, NY) was memorable as Rachel, the unfortunate (or lucky) girlfriend of Paul who is killed before she can be inhabited. Tenor Brandon Scott Russell (Springfield, MO) as Fabian's final incarnation photographer David, and baritone Eduard Laurenson (Auckland, New Zealand) as the cop Jonathan, ran with their choices and fleshed out convincing portrayals. Sopranos Chelsea Lehnea (Chattanooga, TN) and Amber R. Monroe (Youngstown, OH) were entertaining in their appearances as "Two Women."

"If I Were You" may not amount to much as existential drama, but it handsomely fills the bill as a training vehicle and showcase for developing talent. That is Merola Opera Program in a nutshell.

This year's "Merola Grand Finale" will take place Aug. 17 at the War Memorial Opera House, with a wide-ranging program of arias and ensembles. For more information or tickets, visit http://merola.org or call the San Francisco Opera Box Office at (415) 864-3330.