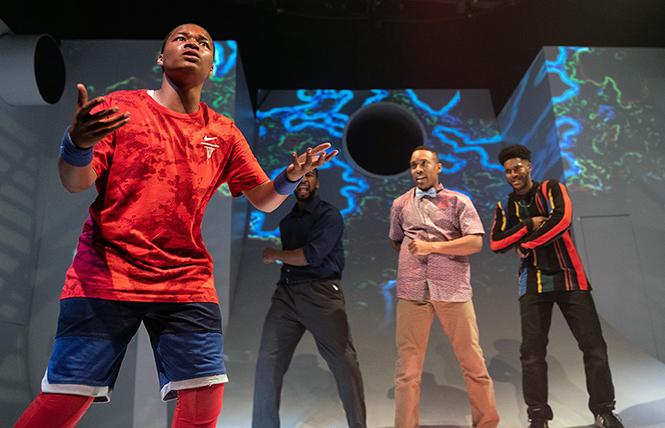 Back in 1944, Sartre's "No Exit" set a famously high bar for dramas about limbo. Playwright James Ijames has stepped onto that philosophically provocative dance floor with his 2018 "Kill Move Paradise," now playing in a handsomely mounted Bay Area premiere co-production by Berkeley's Shotgun Players and the Lorraine Hansberry Theater. But he's added a twist.

After meeting in the afterlife, the lead characters in "No Exit" come to realize that the ways they reflexively interact with each other — suspiciously, critically, judgmentally — is a form of never-ending torture: "Hell is other people."

In "Kill Move Paradise," directed here by Darryl V. Jones, Ijames emphasizes the commonalities of his four protagonists (played by Tre'Vonne Bell, Dwayne Clay, Edward Ewel, and Lenard Jackson) more than their differences. All of them are black — three men and a 16-year-old boy — and they each arrive suddenly, to their own surprise, in the netherworld of Celeste Martore's blindingly white set, with its curving central ramp and round entry portals. They're unexpectedly dead, at the hands of the play's fifth character: Hellish Other People.

That would be the audience, openly acknowledged and named "America" by the onstage cast. By "America," Ijames means our country's dominant culture, and its White Gaze through which black males are seen as problematic actors, potentially violent troublemakers to be watched carefully — and killed as necessary for the ruling class' sense of self-defense.

But in asking its audience to identify as this America, "Kill Move Paradise" becomes as messy as it is meta. The self-selecting theatergoers likely to attend a production of this play by this socially conscious pair of companies are more the exception than the rule when it comes to dominant culture. The racially mixed crowd at the performance I attended clearly appreciated the overall message and intellectual gamesmanship of Ijames' writing, but there was little sense of surprise or drama in the room. It's a sermon delivered to devout believers.

Even setting the demographics of the crowd aside, "Kill Move Paradise" has little momentum, because it takes place within a metaphorical Mobius strip. "America" clinically observes black men performing under a ghastly spotlight, and this perspective leads to more suffering as the evening continues. In addition to the cast members arriving on stage one-by-one, a dot matrix printer onstage generates an ever-growing list of innocent black men killed by whites. The characters occasionally read from this painful litany of familiar names: Eric Garner, Amadou Diallo, Trayvon Martin ...

The endless loop structure of Ijames' script leads to an awkward closing sequence, in which a set of starry galactic projections fills the stage and all four characters manage to climb through a mysterious aperture toward the top of the set, leaving an empty stage behind. Are they making their way to heaven? Is there a better world ahead? Somehow, they've broken out of the cycle we've been sharing with them, but it's not at all clear how or why. Ugly truths have been cleverly demonstrated, but nothing has changed over the course of the play. In this riff on "No Exit," the exits feel unmerited.