Guest Opinion: Awoke and fighting back 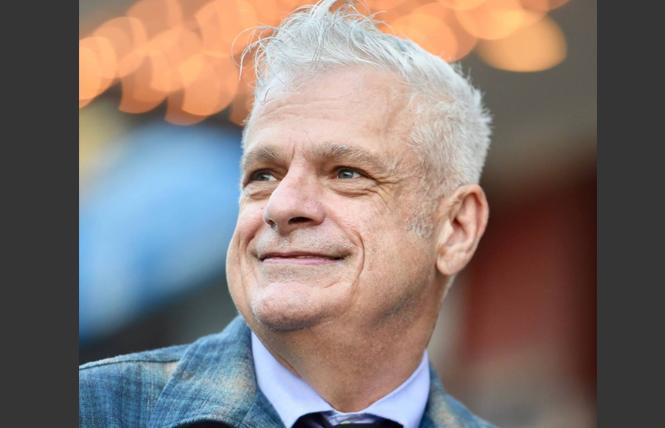 Although I was firmly planting roots in San Francisco, I was also itching to see other parts of the world. I was in the prime of my life and I wanted new experiences, new faces, new surroundings.

With my dwindling savings plus a small government subsidy, I booked a three-month sojourn to Europe. Off I went, with my student Eurail pass and my used Canon Super 8 camera in hand.

First stop, Gay Paree. I did the standard sight seeing. I dutifully visited the Louvre to get a glimpse of the smiling Mona Lisa. But my real destination was the adjacent Jardin des Tuileries, the famed cruising area. I spent days on the benches there, smiling and searching for sex. And finding it in spades.

But as I was fucking my way across Europe, there was disturbing news from the home front. Proposition 6, nicknamed "the Briggs Initiative" for the right-wing state senator who spearheaded it, would ban gays and lesbians from working in California's public schools. It was scheduled to appear on the 1978 statewide ballot.

John Briggs had been emboldened by the successful campaign to repeal a gay rights ordinance by "orange juice queen" Anita Bryant in Dade County, Florida. Early polling suggested Prop. 6 would pass, threatening to spark a national movement of oppression of gay and lesbian people. It had to be stopped.

Here I was, on the continent far away from home. What could I do? Well, I did have my Super 8 camera. I decided to weaponize it. I made an unplanned stop to the grounds of the Dachau Concentration Camp. As I entered its gates, the spirits of the dead, including those of the many exterminated homosexuals, haunted and empowered me. I felt possessed.

I shot close-ups of the weathered train tracks, barbed wire fences, empty barracks, extermination ovens, rusted showerheads, and photos of the ill-fated prisoners that covered the walls in the austere museum. Then I shot contrasting images of the present tranquility at the site: skipping children, smiling tourists, even a baby in a carriage staring blankly at the camera in front of the crematorium.

During that day of filming at Dachau, I would often break out crying. But a slogan, etched in a stone museum monument, empowered me. It simply stated "Never Again." I saw parallels between the Nazi treatment of gays, forced from their jobs and made to wear pink triangles, and the situation of California teachers being called out of their classrooms, fired, and ostracized from society.

On the plane trip home, I conjured a fictional storyline to crosscut with the documentary footage from Dachau. It involved two now-elderly men reuniting in 1978 and reminiscing about one shared night of sex in 1930s Berlin and their subsequent incarceration in a concentration camp. I titled the script "Unity."

I quickly got to work. I asked friends to act as players in the elaborate cabaret sequence where the two lovers meet. I would shoot the silent film in cheap, grainy, high-speed black-and-white Super 8, recreating the look of early German Expressionism. For the soundtrack, I would use Samuel Barber, Dietrich and the Adagietto from Mahler's 5th.

I realized this was a highly ambitious project for a City College student with little professional expertise, but I didn't care. It was a labor of love and passion.

I shot "Unity" at a feverish pace. Literally. Just before filming the complicated cabaret scene, I learned I had syphilis. I was immediately given a heavy dosage of penicillin. Under the hot lights and amid the frenzy of setting up multiple shots, I began sweating like a pig. My syphilitic fever, which had climbed to 103 degrees, was breaking right there on the set. My clothes were dripping wet. Funny, the cast of 20 thought it was artistic passion causing me to sweat buckets. Only I knew otherwise.

The whole film was shot for $250. Again, Castro Camera developed my footage. The store also served as a key meeting and strategizing place for the "No on 6" activists. Opponents of the Briggs Initiative knew they were in the fight of a lifetime, and Harvey [Milk] was the general to lead the battle.

It was during this intensely politicized period that I had a momentous face-off with Mr. Milk.

Remember that this was a time before Harvey became Saint Harvey Milk. While he was still alive Harvey was someone who could be challenged. And I was just the young, opinionated firebrand to do it.

Our fight centered on Harvey's strategy for the upcoming Pride March. One day Supervisor Milk, our de facto leader, dictated to everyone in the store, that due to the upcoming Briggs Initiative, all Pride marchers should be "presentable" to the masses. That is, toned-down versions of our regular exuberant selves.

He lobbied for a massive makeover: All men should dress respectably — preferably in suits and ties, and carry signs announcing their place of origin, as a visual reminder that we were everywhere. This would make us relatable to the straight world, since we desperately needed their votes. There should definitely be no drag queens or leathermen out in front, lest the news media zoom in on the "outrageous elements" within our ranks. And maybe it might be best if they stayed home.

To me, this was hogwash. Drag queens and outsiders populated my world. What was the point of our rights, if those rights were only for people who conform?

I got up the courage to contradict Mr. Milk, launching into an impassioned tirade about how some of us didn't want to dress down to be "normal." He listened to me, his signature smile intact, and then responded.

"This year, this is the way we need to move forward; otherwise we'll lose the election," Harvey stated.

"If we do that, we give up our individuality and honesty, and we lose," I said.

"You are wrong, my dear," Harvey countered.

"Don't condescend to me," I snapped, foam forming at the corners of my mouth. And on and on went this la ronde of an argument, the volume rising between each point and counterpoint. Poor Danny Nicoletta sat quietly at the front desk, unwilling to get involved in a battle between his boss and his friend.

Harvey's thinking won the day. The 1978 San Francisco Pride Parade was both more blatantly political and decidedly toned down. But our little argument became a microcosm of an issue that persists to this day. Assimilation vs. self-expression. Projected reality vs. actual reality.

Harvey is remembered historically as an unabashed radical. But he actually was willing to bend toward the side of caution. And Harvey spoke passionately and convincingly during the campaign against Prop. 6, rallying the troops and influencing the hearts and minds of the mainstream California voting public.

I'll never forget the September evening our community packed an auditorium to watch a televised feed of a Prop. 6 debate taking place in Walnut Creek. Harvey and his historically under-appreciated debating partner, the eloquent San Francisco State Professor Sally Gearhart, squared off against the opposition. We all cheered boisterously as, point-by-point, Harvey and Sally destroyed John Briggs' dangerous agenda. At that moment, my earlier fight with Milk seemed insignificant. We were all in this together.

Editor's note: This is an excerpt — Act I, Scene 8, Fighting Back — from Marc Huestis' memoir, "Impresario of Castro Street," published last month by Outsider Productions. Used with permission.