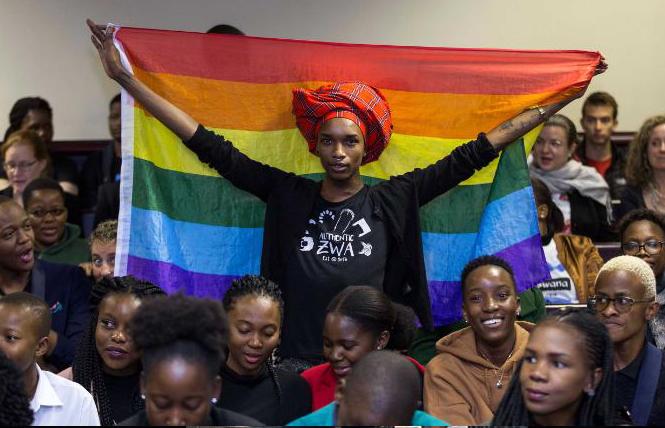 The high court of Botswana Tuesday overturned anti-gay sections of the country's penal code that criminalized homosexuality for more than a century.

"This victory is a historic landmark for LGBTQ people in Botswana and a positive step toward the inclusion of our community across Africa and the world," said Tashwill Esterhuizen, a 2017 Human Rights Campaign global innovator who led the Southern Africa Litigation Center's efforts to litigate this case, in a news release from the organization announcing the June 11 ruling.

HRC director of global partnerships Jean Freedberg called the decision "historic" and praised Botswana, the plaintiff in the case (a gay man known only as L.M.), and the work of the country's LGBT activists.

"We congratulate Botswana's LGBTQ advocates and their legal teams who fought vigorously to achieve this victory and honor the courage of the plaintiff in this case whose voice has given hope to the LGBTQ community in Botswana and so many other places across Africa and the world," said Freedberg in the release.

Since 1885, same-sex relationships have been criminalized under British era colonial rule in three sections of Botswana's penal code.

L.M. filed a complaint in May 2018 against Botswana's attorney general challenging the constitutionality of the penal code sections. He claimed that they violated Botswana's 1966 constitution, which guaranteed him the right to equal protection of the law and freedom from discrimination; the right to liberty; and the right not to be subjected to inhumane or degrading treatment.

In 2017, Botswana's high court ruled in favor of recognizing gender identity and the registration of LGBT organizations with the government.

In other decriminalization news, the parliament in the small Buddhist kingdom of Bhutan overwhelmingly voted in favor of repealing the country's colonial era anti-sodomy laws.

Lesbian attacked in UK speaks out
One of the lesbians who were attacked in the United Kingdom is now speaking out.

Police arrested five teenagers between ages 15 and 18 suspected of brutally attacking and robbing a lesbian couple while riding a double decker bus May 30.

"They started behaving like hooligans, demanding that we kiss so they could enjoy watching, calling us 'lesbians' and describing sexual positions," Melania Geymonat, 28, wrote in English and Spanish on Facebook June 5 describing the incident.

The five young men even started "throwing us coins and becoming more enthusiastic about it," she wrote.

The teens were released on bail June 8, reported Devidiscourse.

The women were attacked while they were out on a date. They were riding a double decker bus to the home of her American girlfriend, who was only identified in the media as Chris.

Geymonat, who is a Ryanair cabin crew member from Uruguay, doesn't recall what instigated the attack, surmising that they might have kissed or something else.

Geymonat didn't know how they ended up in a fight that left her apparently unconscious for an unknown amount of time. Both women were bleeding, she wrote.

She later found out that her nose was broken.

The attack outraged LGBT advocates around the world who saw a photo of the two women that Geymonat posted on Facebook, along with her description of what happened.

"This was a disgusting attack on two women who appear to have been picked out and targeted by a group of youths," he said.

Kseniya Kirichenko, senior officer for women and U.N. advocacy at the International Lesbian, Gay, Bisexual, Trans and Intersex Association, called out the blatant sexualization of the women during the attack in an interview with the Independent.

Kim Sanders, director of communications at Stonewall, noted attacks on queer women are a double whammy.

"For lesbian women there is always an added dimension of misogyny thrown in there. It's an assault on you as an LGBT+ person and on you as a woman," Sanders told the newspaper.

London Mayor Sadiq Khan tweeted, "Hate crimes against the LGBT+ community will not be tolerated in London."

Ten years makes a difference. A decade ago, acceptance of, and legal protections for, LGBT families around the world only encompassed 4% of 169 countries. Today, 27 (16%) of those countries accept queer families, according to Red Letter Days' June 3 news release.

Researchers noted that while much progress has been made, the fight for LGBT family rights is far from over.

The study analyzed data from several reports including United Nations Birthrate Data and the International Lesbian, Gay, Bisexual, Trans and Intersex Association's report "State-Sponsored Homophobia 2017: A world survey of sexual orientation laws: criminalization, protection and recognition." Researchers focused on countries that accept and have laws in place for same-sex marriage and unions and adoption rights for same-sex couples to create the chart.

To read the study, visit www.redletterdays.co.uk/born-every-minute.

The embassy in Seoul, South Korea had flown the flag for a few days, though UPI reported Tuesday that it had been taken down.

In Vienna, where EuroPride is being celebrated this month, the embassy is featuring a statement from Diplomats for Equality and stories in support of LGBT rights on its website.

A post on Mashable reported that the U.S. consulate in Chennai, India is flying the flag, while the U.S. embassy in New Delhi is lit in rainbow-colored lights.

In Jerusalem, several ambassadors marched in the Pride parade taking selfies and some employees held up letters outside of embassies spelling "Pride."

The State Department didn't issue a statement or guidelines for Pride Month as it has in previous years. This made some diplomats question what was happening to celebrate the month, particularly due to the 50th anniversary of the Stonewall riots, which is considered the birth of the modern gay rights movement.

Then, NBC News reported, embassies in Brazil, Germany, Israel, Latvia and other countries submitted requests to raise the flag, only to be denied by Brian Bulatao, the State Department's undersecretary for management.

Bulatao is a longtime associate of Pompeo and worked for him at the CIA.

The State Department's ban on rainbow flags being raised outside of U.S. embassies around the world comes only a week after President Donald Trump tweeted a Pride Month message praising the contributions of LGBT citizens to the U.S. and announced his administration's campaign to decriminalize homosexuality around the world.

"Trump can't have it both ways," said Ty Cobb, director of HRC Global. He slammed Trump in a statement from the organization for recognizing Pride but refusing to allow Pride flags at U.S. embassies within the course of one week.

"He can't tweet claiming to be an advocate for LGBTQ people and turn around and prohibit U.S. embassies across the world from flying a Pride flag," Cobb said.

Homosexuality is criminalized in more than 70 countries around the world. Some countries have the death penalty for LGBT people.

Germany, where Ambassador Richard Grenell is the highest-ranking gay U.S. diplomat, was also denied a request to raise the flag. The Washington Post reported that Grenell is spearheading Trump's decriminalization of homosexuality campaign.

Report highlights LGBT rights in US territories
The Movement Advancement Project, in partnership with Lambda Legal Defense and Education Fund, released a new report, "LGBT Policy Spotlight: LGBT Equality in the U.S. Territories," documenting the status of LGBT rights for more than 3.5 million residents in the five territories.

It is the first comprehensive review of LGBT laws and policies in American Samoa, the Commonwealth of the Northern Mariana Islands, Guam, Puerto Rico, and the U.S. Virgin Islands, according to the June 11 news release from the organizations.

MAP has tracked and documented LGBT laws and policies in the U.S. for more than 10 years.

They found that out of the five territories Puerto Rico ranked the highest overall in LGBT rights. Guam, the U.S. Virgin Islands, American Samoa, and the Northern Mariana Islands all ranked low on LGBT policies.

Guam and the Northern Mariana Islands have "negative" gender identity policy tallies similar to Arizona and Alabama, respectively, according to a news release.

"The United States' long history of territorial expansion has resulted in a truly complicated system of governance and legal protections for territory residents, where even the U.S. Constitution doesn't always apply," said MAP Executive Director Ineke Mushovic in the release. "By tracking LGBT laws and policies in the territories, MAP will advance increased understanding of the territories as a whole, and of LGBT equality within these regions."

Lambda Legal senior attorney Omar Gonzalez-Pagan, a native of Puerto Rico, expressed his pride in ensuring "LGBT people in the territories have access to the same protections as all other LGBT people in the United States," he said in the release.

Lambda Legal helped win marriage equality in Puerto Rico and Guam and won the right for transgender Puerto Ricans to change the gender marker on their birth certificates, he noted.

"It has always taken longer for equal rights to trickle down to the territories, but the impact of discrimination on LGBT families is the same," Gonzalez-Pagan said.

To read the report, visit http://lgbtmap.org/policy-spotlight-us-territories and see the map at http://www.lgbtmap.org/equality-maps.