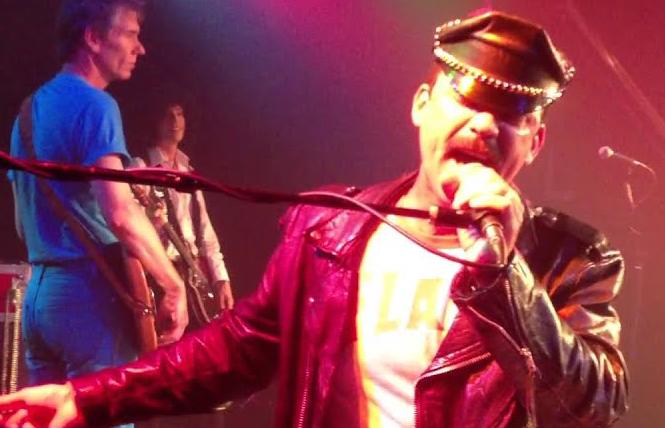 Fair officials said the day has been designated its inaugural Pride Family Day, when all children 12 and under will be admitted free, from opening to closing.

The theme for this year's nine-day fair, which runs June 8-16, is "Celebrating the Best of the Bay."

"The lines to see the movie 'Bohemian Rhapsody' late last year are evidence of the timeless love for Queen's music," Dana Stoehr, CEO of the San Mateo County Event Center and Fair, said in a news release. "We are delighted that Queen Nation will bring Queen's music to our free concert series in June."

Actor Rami Malek won an Oscar this year for his portrayal of the late bi Queen frontman Freddie Mercury in the film.

The fair has multiple concerts lined up during its run; all are included with paid admission to the fair, which is $10 for adults, $8 for kids ages 6-12 (except Pride Family Day), and $6 for seniors. Children 5 and under and military (with ID) are free.

The fair, located at 2495 South Delaware Street in San Mateo, is open from noon to 10 p.m. on weekdays and 11 a.m. to 10 p.m. on weekends. It features a carnival midway, kids' activities, community stage acts, and more.

The San Mateo County Pride Center is planning for a group to go on June 10. For tickets, contact the Pride center at (650) 591-0133 or info@sanmateopride.org.

For more information on the fair, visit www.sanmateocountyfair.com.

This year's theme is "Rooted in Resilience." Organizers said that this year's seventh annual event will be family-friendly and inclusive. Admission is free.

The festival is a sober space.

Additionally, the exhibition features a video station that will play interviews with, and footage of, Bay Area LGBTQ Latinx activists and artists of the past four decades.

The exhibit is curated by Tina Valentin Aguirre, a genderqueer poet, movie director, and opera producer. In the early 1990s, Aguirre helped set up AIDS programs at Mission Neighborhood Health Center's Clinica Esperanza and Community United in Response to AIDS/SIDA. They currently serve as the associate director for institutional giving at the Shanti Project. Aguirre is also chair of the GLBT Historical Society's board of directors.

A public reception will take place Friday, June 7, from 7 to 9 p.m. at the museum, 4127 18th Street in San Francisco's Castro neighborhood. The curator will offer introductory remarks and light refreshments will be served. Admission is $5; free for historical society members. For tickets, visit https://bit.ly/2HSaqgW.

Organizers said they would be highlighting achievements of the past year, and raise funds for the road ahead.

The evening begins with a VIP reception at 5 p.m., followed by the program from 6 to 9. The keynote speaker will be Yosimar Reyes, a queer undocumented immigrant, poet, and activist.

Tickets are $250. RSVPs are needed by Friday, May 31. A valid, government-issued ID with photo is required for entry to the building.

For more information, and to purchase tickets, visit https://secure.givelively.org/event/oasis-legal-services/salesforce-tower.

These revisions, the first since 1994, implement U.S. Department of Justice recommendations and affirm DPA's independent authority to investigate police misconduct, according to a news release from the agency.

"I am proud that the DPA took the lead in the first updates to General Order 2.04 in more than 20 years," agency director Paul Henderson, a gay man, said in the release. "These revisions clarify and reaffirm the Department of Police Accountability's independent jurisdiction to investigate peace officer misconduct and are an important step to building public trust in our civilian oversight system."

The police commission approved the changes at its May 15 meeting.

The new General Order 2.04 recognizes DPA's historical practices and clarifies its jurisdictional authority. The revisions acknowledge DPA's independent jurisdiction to investigate officer-involved shootings. They permit DPA to accept and investigate complaints from other city agencies. The revisions affirm the department's right to investigate complaints regarding conduct of off-duty officers if the officer has represented him or herself as law enforcement.

Every police station must now make DPA materials and complaint forms easily accessible to the public. Citizens will no longer have to request complaint forms or DPA contact information from station keepers or other officers, according to the release.

The order establishes a quarterly disciplinary board that will hold meetings between DPA and SFPD to identify and address disciplinary trends and training deficiencies.