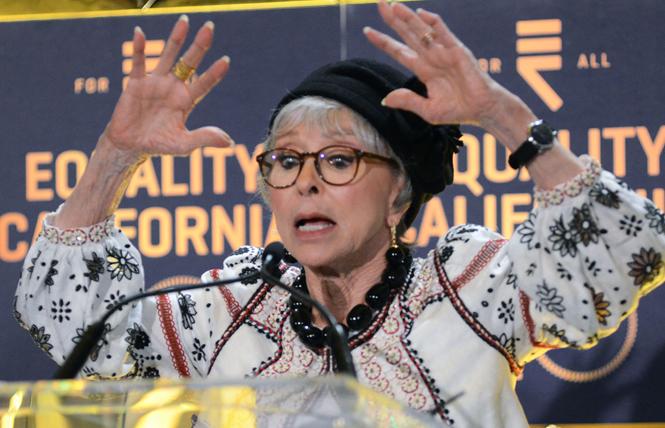 Housing — and the lack of it — was one of the themes at Equality California's 20th anniversary gala last weekend, as two San Francisco officials who work on the issue, one elected and one a department head, were recognized by the statewide LGBT rights organization.

The city was well represented at the May 11 Equality Awards event at the Fairmont Hotel. Mayor London Breed gave a shout-out to the city's new fire chief, lesbian Jeanine Nicholson, as she introduced gay state Senator Scott Wiener (D-San Francisco), who received the Vanguard Leadership Award.

"And yes, we need to build more housing. Scott has pushed the envelope," the mayor said, referring to Wiener's controversial Senate Bill 50 that would legalize more housing, including affordable housing, near public transportation and streamline the approval process.

Wiener told the sold-out audience of about 600 people that he accepted the award on behalf of the entire Legislative LGBT Caucus, which currently has seven members and Wiener chairs.

"The work that we do fighting for LGBTQs — we do it as a team ... in partnership with EQCA," he said.

Wiener said that even though California has some of the strongest LGBT rights laws in the country, "we have enormous work to do."

"Today, young LGBT people are criminalized for having sex, and get put on the sex offender registry," he said. "Our trans brothers and sisters in the criminal justice system are treated horribly."

Wiener has proposed laws to help both of those situations. One would require that incarcerated transgender people in California jails be referred to by their preferred pronouns, gender, and name. Another would prevent gay male adolescents from having to be listed on the state's sex offender registry.

Emcee Carmen Carrera, a trans woman and actress, noted that four out of 10 LGBT youth in San Francisco identify as LGBTQ.

"Senator Wiener knows we need more homes," she said. "We can be the light — all of us in this room."

Kevin Bard, president of the progressive Harvey Milk LGBTQ Democratic Club, attended the dinner. He had a different take on Wiener's housing legislation.

"This is a $600 ticketed dinner," he said in a brief interview. "Most people [here] never worry about paying the rent."

Bard said he has a very good relationship with EQCA, but that housing is critical.

"You can't protect LGBTs without protecting LGBTs from losing their homes, in my opinion," he said. "Low rent equals LGBT rights."

Rahaim and his staff are constantly involved in housing issues, and Rahaim talked about the work he's done in the Mission district for the past several years. Erick Arguello, president of the Calle 24 Latino Cultural District, helped introduce Rahaim.

"The Mission district has taught me so much," Rahaim, who lives there, said. "I'm proud we've changed the tenor of the conversation. I didn't think that would happen five years ago. We can grow and be a city with soul."

Actress Rita Moreno, 87, one of the few stars who's received Emmy, Grammy, Oscar, and Tony awards, was presented with the Ally Leadership Award.

She told the audience of how she came to the U.S. from Puerto Rico when she was a young girl, and the teasing she endured.

"The older I become, the more comfortable I become," she said. "I want that for everyone."

EQCA Executive Director Rick Zbur talked about the organization's legislative priorities this year, including getting increased access to PrEP. He also talked about the work EQCA has accomplished over the years, including the push for marriage equality and helping lead the successful legislative effort to ban conversion therapy for youth. Nonbinary Californians can now go to a Department of Motor Vehicles office and change their gender marker, he added.

"All of these laws were sponsored by EQCA," he said. "And yes, there were challenges and setbacks along the way."

Those include EQCA's court fight against President Donald Trump's ban on transgender people serving openly in the military.

"He is truly hell-bent on rolling back progress we've achieved," said Zbur. "We in California have a special role in leading the movement. We cannot rest if we don't have full equality."

For more photos, see Shining Stars in the BARtab section.