Ross & Roma on roasts - Celebrated Sister gets skewered on Saturday 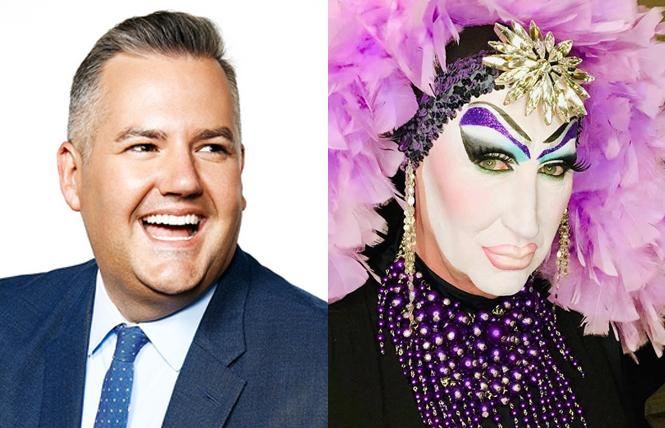 Ross Mathews seems like the least likely candidate for a shade-throwing night of comic insults hurled at Sister Roma, but it's all in fun, and the upbeat series regular on RuPaul's Drag Race will serve as a tonic to the Jungle Red claw-like insults one can expect at The Roast of Sister Roma, Saturday May 18 at the Castro Theatre.

The last time he was in San Francisco (September 2018), Mathews received a GLAAD Award at the Bay Area edition of the ceremony.

"We also did a live podcast in the Castro. I can't wait to have my favorite dinner, the roast chicken for two at Zuni Café. I'll be out and about!"

As MC of the evening, Mathews admits he's not much of a roaster.

"I could think of nasty things to say, but I would have to call my mother and repent," he joked in a phone interview with the Bay Area Reporter.

A native of Mount Vernon, WA, the 39-year-old comic, author and ebullient TV personality has brought upbeat gay verve to the E! Network, awards broadcasts, Celebrity Big Brother, RuPaul's Drag Race and numerous other shows since his beginnings as an intern on The Tonight with Jay Leno in 2001. His charming wit and show biz career got a jumpstart when the show gave him short on-the-street segments that wowed fans, building to coverage of movie premieres, Academy Awards red carpet broadcasts, even two Winter Olympic Games. 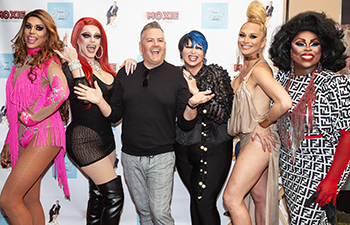 Although he acknowledges having joined the ranks of gay TV personalities, he lacks the barely veiled closet of his forerunners like Charles Nelson Reilly and Paul Lynde.

Does his presence at drag queen-filled events provide a balance to the shade and eye shadow?

"I would imagine that producers thought of me for that," said Mathews, who, along with being one of the nicer RuPaul's Drag Race judges, recently toured Europe with several stars from the show.

"Roasts are hilarious, but insult comedy is not in my tool belt," said Mathews. "It'll be just like any holiday with your family; I'm like Aunt Helen, who pacifies everyone."

"I've only recently gotten the impact of it all," he said, specifically of the European tour. "I was in countries I thought I'd never visit, and at the shows, there'd be 2000 people lined up to see them."

On a more intimate side to touring, Mathews mentioned several smaller U.S. cities where he's brought his Brunch talk show, including Columbus, Ohio.

"I loved it there. The Short North; they have a really sweet and strong gay community there."

As to being a celebrated out gay TV host, Mathews said that he's never had to be in the closet.

"I never felt that need to be closeted. Because I could be open, the innuendo went away. I never had to be snarky. I prefer to 'kill 'em with kindness and win in the end,' but not in a Pollyanna way. I just never learned that need for sarcasm."

Like sweet tea to his costars' whiskey sours, Mathews brings a refreshing openness to his gigs, be it writing for Chelsea Lately or co-judging with his good friend Michelle Visage.

"I try to balance out the panel," he said. "Michelle goes for the jugular, and I put some lube on it." 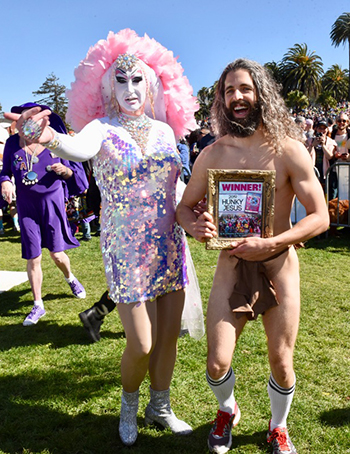 Asked if he's ever considered creating a drag persona of his own, he said, "Maybe one day. I'm not opposed to it. But my role now is as a super-fan. I have always loved going to every drag show that I can. I cash out my $20s so I can tip them. I've never claimed to be an expert, but more to serve as support."

"She's such an original and a legend," said Mathews. "You have to show such respect, and I'm honored to even be asked to participate. I take The Sisters' role in our community seriously. They are heroes and have done so much."

But that won't stop him from guiding the volley of good-natured ribbing.

"That's the whole point of a roast, to have a laugh. For one night, everyone can take the stick out of their ass."

Roma Roasted
Sister Roma says her roast is due, since she's enjoyed poking fun at other queens at previous events.

"Drag roasts have become so popular," said Roma in a phone interview. "There's Bianca Del Rio's Haters Roast, and Heklina started the local versions of herself, and for Donna Sachet and Peaches Christ. At first I was apprehensive. I didn't know if I could do insult comedy. But then I decided to go all in and have fun."

As to being the target of the evening's jokes this time, said Roma, "I feel like it's my turn."

Along with co-MCing the Sisters of Perpetual Indulgence's 40th anniversary Easter Sunday (and its return to Mission Dolores Park last month), 56-year-old Michael Williams celebrates 32 years as Sister Roma, 'The Most Photographed Nun In The World™.'

As a community fundraiser, Roma's tally approaches $1 million raised for local causes. Her activism around the discriminatory Facebook 'real names' policy made international headlines. Her work in design for the adult video industry may be the source of some naughty jokes. In that light, Roma also reminds fans that the event is all in fun. She also hinted about a video segment with a certain 'D-List' celebrity.

"Roasts are an opportunity to let loose a guilty belly laugh," she said. "Sometimes we know we have to laugh at life or we'd cry. I hope people can suspend their sensitive feelings and appreciate some dark humor."

"The Friars' Club roasts were really good. Some of them were so funny. But drag queens have been roasting each other since the first person threw on a wig."

"And obviously I've known Heklina, since 1906, before the earthquake. Jackie Beat and I have a long history, so they've all got dirt on me. They know where the bodies are buried."