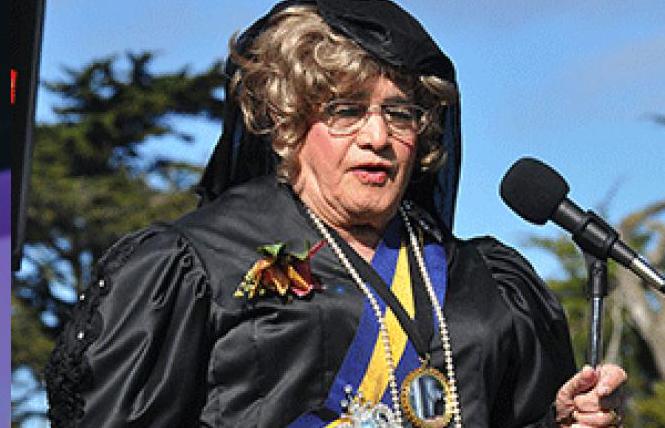 Friends and colleagues of the late Jose Julio Sarria are once again working to get him inducted into the California Hall of Fame, after former governor Jerry Brown nixed that idea several years ago. Unlike the 2015 effort, however, the new governor, Gavin Newsom, a former San Francisco mayor, is believed to be more inclined to bestow the posthumous honor on Sarria, a Latino gay man and drag queen who was the founder of the Imperial Court System and the first out gay person to seek elective office in the U.S. His 1961 bid for a seat on the San Francisco Board of Supervisors was unsuccessful, but he garnered a lot of votes and showed countless other potential LGBT politicos that they, too, could seek elected office. Today, there are hundreds of out LGBT elected officials around the world.

Newsom should induct Sarria into the California Hall of Fame, which presently doesn't reflect the diversity of the Golden State. While the inductees are all worthy, there are only a handful of out individuals, and Sarria's career certainly meets the criteria of an individual who made a lasting contribution to society.

Significantly, Sarria was an inspiration to many LGBTs at a time when it wasn't common for us to be out, or stand up for ourselves in the face of discrimination. He was a source of strength that gave LGBT people the courage to organize and fight back against anti-gay police discrimination. This year is the 50th anniversary of the Stonewall riots in New York City, which many view as the birth of the modern gay rights movement. It's important to recognize that Sarria was organizing and fighting against societal and institutional homophobia on the West Coast years before the 1969 rebellion. Lesbian Senate President Pro Tem Toni Atkins (D-San Diego), who helped lead the 2015 induction effort and is doing so again this year — along with gay state Senator Scott Wiener (D-San Francisco) and gay Assemblyman Todd Gloria (D-San Diego) — told us at the time that Sarria "helped end raids of establishments that catered to LGBT people and helped move our community toward equal treatment under the law." The three legislators met this week with Newsom and had a "good conversation," according to participants at the meeting.

As we editorialized supporting his induction four years ago, Sarria was a pioneer in the city's nascent but growing gay community. Besides his political activism, Sarria's crowning at the Beaux Arts Ball in 1964 led to the founding of the Imperial Court System, over which he reigned as Grand Mere, Absolute Empress I de San Francisco, the Widow Norton (the imagined widow of Emperor Norton, a local 19th century eccentric). The Imperial Council of San Francisco, a charitable organization, is more than 50 years old and was the first of numerous imperial courts around the world. It has raised millions of dollars for charitable causes and is an important way for LGBTs to connect through drag culture. Since the last attempt to induct Sarria there has been an explosion of drag culture with TV shows like "RuPaul's Drag Race" and "Pose," and the drag exhibit at the Met. Drag queen story hours at public libraries are a big draw for kids, even as they are protested in some parts of the country. Sarria was responsible for laying the groundwork for creating an out and proud LGBT community and deserves to be recognized in the hall of fame.

This year, in addition to the Legislative LGBT Caucus, the trustees of City College of San Francisco have passed a resolution in favor of Sarria's induction; the Board of Supervisors is expected to soon vote the same.

Sarria died in 2013 at the age of 90. He remained active until the end, attending coronations, promoting the Imperial Court System, and fighting for LGBT rights.

This isn't the only decision that Newsom is expected to make that would reverse one of Brown's. It's an important one that will recognize and preserve the memory of a Latino LGBT trailblazer for present and future generations of queer people.