No 'shortest way' to the White House for Buttigieg 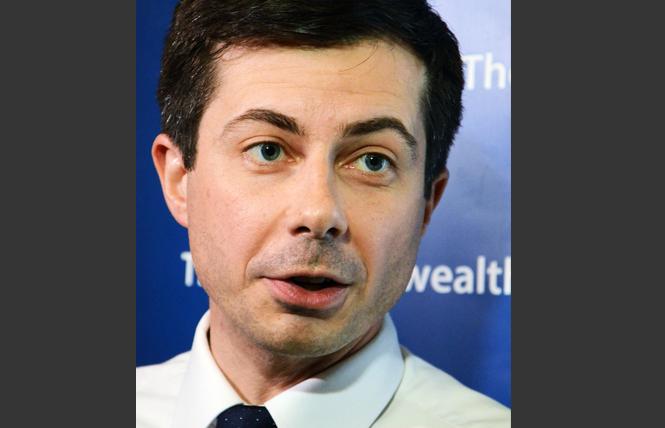 The last paragraph of Pete Buttigieg's memoir, "The Shortest Way Home," could almost serve as a summary of "The Wizard of Oz": The protagonist rushed to "escape the hometown that had shaped me," then "slowly and imperceptibly" came to see "the meaning I sought was to be found very close to where I had begun ..."

The path that was once the "shortest way home" is not the one the gay mayor of South Bend, Indiana must travel to get to the White House. His campaign to become the Democratic nominee for president in 2020 has put him on a road many candidates have traveled before. And on that road, he has already encountered many adversaries, a wide variety of supportive friends, and the metaphorical fields of "poppies" that can pull down any candidate's campaign.

Buttigieg has, so far, demonstrated skill in fending off the metaphorical wicked witches. First, gay U.S. ambassador to Germany Richard Grenell accused Buttigieg of creating a Jussie Smollett-style "hate hoax" against Vice President Mike Pence, referring to the gay former "Empire" star who initially said he was the victim of a hate crime but police said he staged the attack. Charges police brought against Smollett were dropped.

Then, late evangelist Billy Graham's son, Franklin, tweeted his opinion that Buttigieg should not be "flaunting" his being gay but "repenting" it.

Last week, two Republican operatives tried to promote false accusations that Buttigieg had sexually assaulted two men (both of whom denied the claims). And just last Friday night, his speech was interrupted multiple times at a local Democratic Party event in Dallas by anti-abortion activist Randall Terry and several others, who yelled things like, "Remember Sodom and Gomorrah."

"Politics can be ugly sometimes," he told the Daily Beast, "but you have to face that when you're in presidential politics."

In collecting support, Buttigieg has racked up numbers that are unprecedented for such a relatively unknown candidate. Several polls in April — both national and Iowa and New Hampshire specific — show potential Democratic voters consistently putting him in third place. One New Hampshire poll even showed him tied with Senator Bernie Sanders (I-Vermont) for second (behind former vice president Joe Biden in first). And in fundraising, his campaign reported slightly more than $7 million during the first quarter of 2019.

Those "support" numbers have to be looked at in context. With the polling, most of these early surveys including Buttigieg are measuring likely Democratic primary and caucus voters or voters who at least "lean Democratic." These voters tend to be more progressive than the general voting population.

The most recent poll in New Hampshire, by the Boston Globe and Suffolk University April 25-28, found Buttigieg tied with Sanders for second when polling more than 800 adults who broke down roughly 37% independent, 32% Republican, and 29% Democratic. Looking at the raw data, only 52% of those 800 said they would likely vote in the Democratic primary.

Fundraising
When it comes to collecting dollars, the only hard data available is from reports campaigns had to file with the Federal Elections Commission by March 31, covering the first quarter fundraising. In the 2012 Republican primary, gay candidate Fred Karger raised only $588,000 for the entire two-year campaign. So Buttigieg, with $7 million in the first three months, is well beyond that mark.

Compared to other Democratic presidential candidates — not including Biden, who entered the race only last month — Buttigieg's total fundraising haul ranks only ninth. He raised only about one-third of what Sanders did ($20 million) and only about half of what Senator Kamala Harris (California) did ($13 million), though Harris is polling just below Buttigieg in the latest surveys.

In an even broader context, it's worth noting that President Donald Trump has raised $30 million, but only $7.3 million of that was in individual contributions.

These dollar figures are only one marker of a candidate's potential viability in the race, and data from contributions and polling are hurdles candidates must clear in order to secure a spot in the Democratic primary debates, which start in June. Buttigieg has qualified, along with Harris, O'Rourke, Sanders, Warren, and businessman Andrew Yang, according to fivethirtyeight.com.

A closer examination of FEC records indicate that, in the first quarter, Buttigieg received almost no money from the LGBT community's best known politicos. For instance, FEC records show no direct individual contribution to Buttigieg in the first quarter from San Francisco philanthropist and former ambassador James Hormel, Chicago Cubs co-owner Laura Ricketts, or Hollywood producer David Geffen. Former Clinton appointee Roberta Achtenberg contributed to the campaigns of both Buttigieg and Harris in the first quarter, as did D.C. Democratic activist Steve Elmendorf.

But it's simply too soon to pronounce where the LGBT community is investing its money in the presidential primary. Most voters, including many LGBT voters, didn't know Buttigieg for much of the first quarter, and Buttigieg has, in recent weeks, just started going to LGBT fundraisers in big cities to seek the community's support. And it's too soon to predict whether LGBT donors will decide to put their money behind an out candidate if they feel forced to choose between him and a supportive Democrat who is seen as a better challenger to Trump.

On April 30, the Boston Globe released a poll showing that, of 429 voters likely to vote in the New Hampshire Democratic primary, only 5% said they thought Buttigieg could beat Trump in the general election. (That compared to 35% who think Biden can and 13% who think Sanders can.)

And then, there are the poppies — those unpredictable issues that pop up in every campaign — issues a candidate must march through without getting pulled down.

"Since learning about how that phrase was being used to push back on that activism," said Buttigieg, "I have stopped using it in that context."

He's had to deal with continued criticism, too, for his decision not to release audiotapes secretly recorded by South Bend's African American former police chief, whom Buttigieg demoted. Supporters of the police chief want the tapes made public in hopes of exposing the racist attitudes of some South Bend white police officers. Buttigieg said he wouldn't release the tapes because they were made in violation of the Federal Wiretap Act. He said he demoted the police chief because the chief failed to notify him that the chief was the subject of a criminal investigation by the FBI and, so, he felt he could not trust the chief.

He's had to address smallish dust-ups around his being a fan of Eminem, a rapper notorious for anti-gay lyrics, and chicken from Chick-fil-A, a company whose foundation has funded and promoted anti-gay candidates and positions.

Buttigieg, asked about both on "The Breakfast Club," a nationally syndicated radio talk show, said he admires Eminem's "militant pride" in his hometown of Detroit but "it's not like you can excuse the homophobia." As for Chick-fil-A, he said, "I do not approve of their politics, but I kind of approve of their chicken."

"We've got to find a way to use our identities to reach other people," said Buttigieg. "There's two things that can happen when you are conscious of your identity. One is it turns into all these ways of separating ourselves from each other, and it just turns into one big, 'You don't know me.' But the other way we could do it is we can say, 'OK, I've got this experience, you've got that experience, what can we talk about that brings us together. What do we have in common?"

There's no doubt Buttigieg's identity of being gay will be another — perhaps the most difficult — challenge he'll have to negotiate along his road to the White House.

A poll released April 30 by Quinnipiac University found that 70% of 1,044 voters polled nationwide (including 46% of Republicans) are "open" to electing a gay man president. But 52% of voters are not ready to do so (margin of error 3.5%).

The New York Times published an article recently suggesting the "wall" against electing a gay candidate might be crumbling. The Times asked the New Hampshire Democratic Party's gay chairman, Ray Buckley, whether voters "need to see something else first, something other than gay?"

Buckley said that was true of "any candidate that isn't a straight white male."

"Can Mr. Buttigieg win the presidency?" asked the Times.