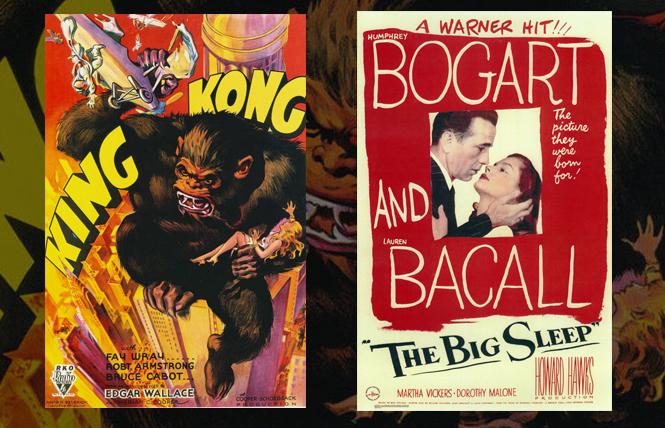 May flowers at the Castro Theatre.

"Little Shop of Horrors" (1986) Frank Oz reboots this Roger Corman classic about a very strange plant store. This version benefits not only from big-budget technology but also from a magnificent ensemble led by Disney studio actor Rick Moranis as the nerdy Seymour, Ellen Greene as his squeaky-voiced love interest, and Steve Martin as a brutal S/M biker. John Candy contributes to the black comedy as a local radio DJ.

"Rocky Horror Picture Show" (1975, UK) Jim Sharman directs this classic Midnight Movie with a campy script. Great example of a film that failed in prime time distribution but found a teen/20something audience who saw it an amazing number of times, bringing props like rice for the wedding scene. Notable for Tim Curry's sexy MC and Susan Sarandon's early career turn as the naive Janet who, with her cleancut boyfriend (Barry Bostick), stumbles into the Transylvanian coven. (both 5/10)

"Godzilla" (1954, Japan) Monster movie from director Ishiro Honda was inspired by Japanese reaction to the American atomic bomb attacks that ended WWII, and started an endless fear of radiation and the monsters (literal and figurative) that arose from the atomic age. (both 5/11)

"Giant" (1956) Edna Ferber's novel became an instant classic with stellar performances from two queer icons, Rock Hudson and James Dean, for whom it was a last screen performance, released after his death in a California road accident. It's about Texas' evolution from a cattle and agriculture economy to an extraction economy based on oil.

"There Will Be Blood" (2007) Daniel Day-Lewis and Paul Dano are bitter rivals in this astonishing drama about the origins of the Western oil industry. Day-Lewis is the oil wildcatter whose great wealth turns him into a near-psychotic tycoon and sets him up for a life-and-death struggle with a duplicitous preacher (Dano). Based loosely on Upton Sinclair's novel "Oil!," adapted for the screen by director Paul Thomas Anderson, the film won Oscars for Day-Lewis and its cinematographer, Robert Elswit. (both 5/12)

"Amityville II: The Possession" (1982) A Long Island-set horror film that's absolutely not for everyone. (both 5/24)