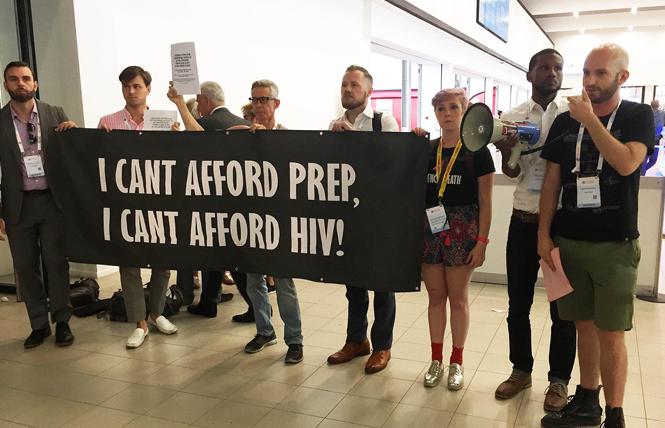 James Krellenstein, right, with the PrEP4All coalition, speaks during a demonstration at the International AIDS Conference in Amsterdam last year. Photo: Liz Highleyman

The Centers for Disease Control and Prevention holds patents on the use of Truvada for HIV prevention, according to advocates, who want Gilead Sciences to pay future and retroactive royalties to make PrEP more widely available.

Truvada (tenofovir disiproxil fumarate/emtricitabine), which was initially approved for HIV treatment, is the only product approved by the Food and Drug Administration for HIV prevention. While Gilead holds patents on the Truvada coformulation — due to expire in 2021 — and its two component drugs, advocates found that the U.S. government separately patented use of the pill for PrEP, an indication approved in 2012.

On Wednesday, the Washington Post reported that he Department of Justice has launched a review of a government patent for use of the drug.

The list price for Truvada is around $1,600 per month. Gilead's patient assistance and copay programs substantially lower the out-of-pocket cost for many users, but the cost to public health programs is considerable. Generic versions exist, costing around $6, but they are currently not available in the United States.

PrEP4All coalition members researched the government's patents and commissioned an outside review by Christopher Morten, a patent expert with the Global Health Justice Partnership at Yale Law School and the Yale School of Public Health. The results were given to the Post, which broke the story March 26.

"Each patent is assigned to — that is, owned by — the United States of America, as represented by the secretary of the Department of Health and Human Services. The research underlying the patents appears to have been performed at the Centers for Disease Control and Prevention," according to Morten's statement. The government, if it decides to enforce its claim, "could possibly be entitled to collect money damages," the statement added.

Although Gilead carried out the Phase 3 clinical trials that led to the approval of Truvada for HIV treatment, the prevention studies were mainly funded by the federal government and private philanthropy.

After a series of studies in monkeys, Dr. Robert Grant of the Gladstone Institutes at UCSF and fellow investigators with the iPrEx trial showed that once-daily Truvada reduced new HIV infections by 92% among mostly gay and bisexual men who used it consistently. This research received most of its funding from the National Institutes of Health and the Bill and Melinda Gates Foundation; Gilead provided the drug free of charge.

Gilead told the Post in a statement that it has discussed the patent issue with CDC representatives, but declined to provide details. Likewise, Health and Human Services Secretary Alex Azar told NPR that the government is in "active negotiations" with Gilead. The company claims that Truvada was already being used off-label for HIV prevention before the CDC's patent application.

PrEP4All previously made news last summer when advocates held a demonstration at the International AIDS Conference in Amsterdam demanding that the U.S. government use "march in provisions" to break Gilead's patent on Truvada in the interest of public health.

Now, activists want the government to use its own patents to make PrEP more widely available. The CDC estimates that only around 10% of the estimated 1.2 million people who are at high risk for HIV are using PrEP, with the proportion falling to low single digits for African Americans, who have the highest rate of new infections.

"The consequences of the CDC's negligence has been catastrophic," Krellenstein told the Bay Area Reporter. "The number of new HIV infections in the U.S. is the same today as it was when PrEP was FDA approved."

Advocates assert that Gilead should pay royalties on the use of Truvada for PrEP, both going forward and retroactively to 2012. They say the CDC's royalty revenue could be used to fund a national PrEP program that provides low-cost PrEP — either Truvada or a generic equivalent — and wraparound services such as lab tests and clinical care.

"Wide-scale, unfettered, affordable access to PrEP is key for reining in HIV," the Treatment Action Group said in a statement. "The CDC has everything it needs to dramatically lessen these financial barriers and more effectively use anticipated new HHS funding to get access for hundreds of thousands of Americans who need PrEP."