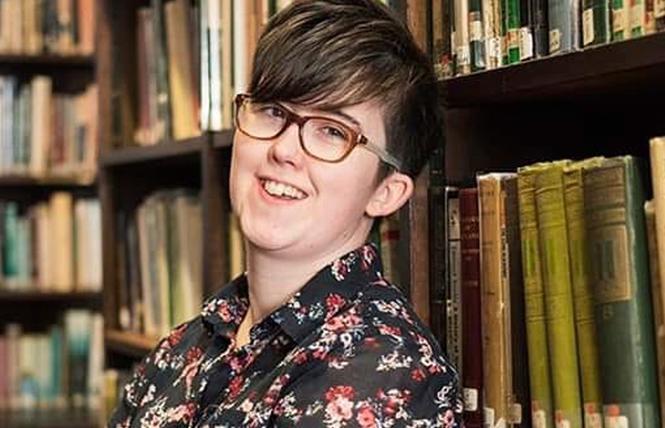 Members of the New IRA apologized for last week's killing of prominent lesbian journalist Lyra McKee by one of its volunteer members in a statement to the media Tuesday.

McKee was shot in the head April 18 while covering a raid on "dissident republican activity" near a police SUV in Derry (also known as Londonderry).

Two young men were arrested and released without charges over the weekend.

On the night of the raid, there were some explosions and gunfire. Two cars that were set on fire were captured on video.

Irish politicians are calling for the violence to stop in Northern Ireland and for justice for McKee, 29, who was a rising star as a freelance investigative journalist.

She was immediately taken to a nearby hospital where she died, Assistant Chief Constable Mark Hamilton told reporters at a news conference last Friday.

"There is no comfort for us in knowing that her killing, unlike that of Martin O'Hagan or Veronica Guerin, was not targeted," Ciarán Ó Maoláin, the Belfast secretary of the National Union of Journalists, told the Irish News.

McKee is the seventh journalist murdered on the job in 2019 and the first in the United Kingdom. Violence against journalists is on the rise, and 2018 was one of the deadliest years ever for journalists, according to Reporters Without Borders.

McKee was set to speak next month on World Press Freedom Day about the dangers of reporting violent conflicts, according to Gay Star News.

"Lyra was a great young journalist, whose commitment to truth was absolute and whose laughter could light up a room," said Patrick Corrigan, Northern Ireland program director of Amnesty International.

"Journalists put themselves on the frontline in the battle for truth every single day," Corrigan continued. "Every day, it becomes more dangerous for reporters to do their job on behalf of us all."

Her death happened the night before the 21st anniversary of the Good Friday Agreement that brought peace to Northern Ireland after decades of violent clashes between Catholics and Protestants. It was also days before the anniversary of the historic 1916 Easter Rising, known as the Easter Rebellion, which ended with Ireland's independence, with the exception of Northern Ireland.

McKee wrote about the "illusion" of peace in Northern Ireland four years ago.

"With the signing of the Good Friday agreement, my generation, the children, and grandchildren of the civil rights protesters were told we would be the first to enjoy peace in decades," she wrote, reported The Times newspaper. "But just because we're not at war any more doesn't mean the shadow of the gunman has left the room."

The New IRA is a militant Irish nationalist group that disagrees with the 1998 Good Friday Agreement.

Vigils to mourn McKee's murder drew hundreds in Derry and Belfast in Northern Ireland, and Dublin, and other parts of Ireland last week. A memorial is growing at the site where she was shot as people honor her legacy.

Sinn Fein Vice President Michelle O'Neill denounced the New IRA, saying they "do not represent any version of Irish republicanism."

"This morning, we were deeply saddened to learn of the violence and senseless murder of a young woman in Derry-Londonderry last night," House Speaker Nancy Pelosi (D-San Francisco) told reporters in Belfast.

She was in Northern Ireland's capital city leading a two-day delegation to commemorate the Good Friday Agreement anniversary as a part of a longer tour of Ireland, which included Derry-Londonderry. She spoke out against the violence and its "stark contrast" to the agreement.

"These acts stand in stark contrast to the commitment to peace and a brighter future that we witnessed during our visit to that beautiful city," she said.

Later in the day, during an address to political leaders after meeting with youth who grew up after the agreement was signed, Pelosi said, "The Good Friday accords are alive and well," and "we have a commitment to protect them."

Gay Irish Prime Minister Leo Varadkar tweeted, "The government condemns in the strongest possible terms the fatal shooting of journalist and writer Lyra McKee in Derry. We are full of sadness after last night's events. We cannot allow those who want to propagate violence, fear and hate to drag us back to the past."

Named by Forbes Magazine as one of the "30 under 30 in media" in 2016, McKee was known for her passion and wit. She came to prominence when she published a blog post, "Letter to my 14-year-old self," about growing up gay in Belfast in 2014. The post was later turned into a short film.

She also was an author. She recently signed a two-book deal with publisher Faber & Faber. Her first book, "The Lost Boys," was expected to be released next year, reported GSN. She also self-published a non-fiction novella, "Angels with Blue Faces," about the Troubles, or the Northern Ireland conflict between Catholics and Protestants in the late 20th-century.

McKee was a beloved member of the LGBT community and very active at events and fundraising for causes, people recalled.

Friends, family and professional colleagues were all taken aback by her untimely death and expressed a profound sense of grief for their loss.

McKee's partner, Sara Canning, told people who came out to the Good Friday vigil that she is left without "the woman I was planning to grow old with."

"We are all poorer for the loss of Lyra," she said.

McKee's friend Alison Millar, who was supposed to meet her for dinner the night she was killed, said the "reaction is global."

"It is so huge and a massive will from the people of Derry to say, 'We don't want this,'" said Millar, reported the BBC.

However, she noted for McKee's partner, friends, and family "the fact that there has been such an outpouring of love for Lyra and outrage at her murder ... it doesn't bring her back."

About 50 protesters attended the event, marching with red tap over their mouths to demonstrate the silencing of LGBT people and issues in Russia.

The Day of Silence is a global student-led protest.

Activist Daniel Maksimenko told Pink News he overheard the police say they were "going to detain everyone who walked with their mouths sealed."

Police began arresting the activists as they marched toward the Church of the Savior.

Radio Free Europe documented the demonstration and arrests in a video (http://www.rferl.org/a/russia-lgbt-rights-protest/29889686.html).

In 2013, President Vladimir Putin signed a so-called gay propaganda act into law. Since then hate crimes against LGBT people have been on a significant rise, the worst demonstrated by the detainment and torture of LGBT people in Chechnya starting at the end of 2017.

Demonstrators, like those who attended last week's annual event, are often arrested by police based on the 2013 law.

Last year, the European Court of Human Rights ruled that Russia's ban on Pride was discriminatory and breached human rights.

"Instead of banning fundamental rights and freedoms to protect social peace, they said that the group that is vulnerable to any attack should be protected," said Hayriye Kara of Kaos GLs, Turkey's leading LGBT organization, in a statement following the decision, reported Middle East Eye.

"This is a momentous day for LGBTI people in Turkey and a huge victory for the LGBTI rights activists — love has won once again," said Filippou.

The ban was instituted by governors' offices in Ankara and Istanbul, claiming LGBT events could "provoke reactions within certain segments" and declared a state of emergency following the attempted coup in 2016, reported the newspaper.

The ban was in place for 17 months, however, many LGBT activists took to the streets anyway to hold Pride marches. They risked arrest, having tear gas thrown at them, and being attacked by riot police and anti-gay rioters.

Homosexuality isn't illegal in Turkey, but homophobic attitudes continue throughout the society.

Ankara and Istanbul have held Pride marches since 2003.