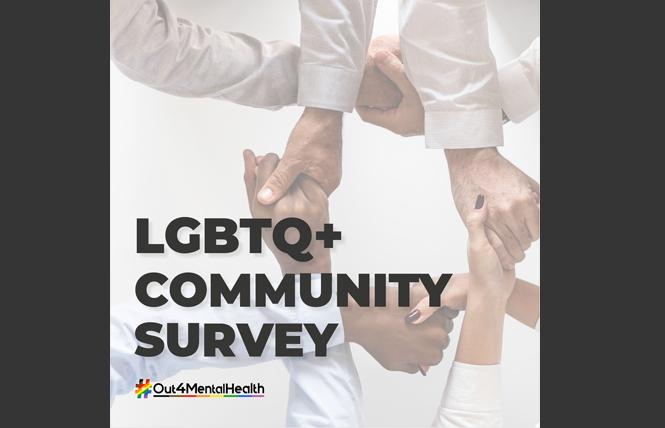 California has launched what is believed to be the state's first mental health survey of its LGBTQ citizens.

The survey is aimed at learning more information about LGBTQ people's experiences accessing mental health services, if they have thought about suicide, and how they have been impacted by anti-LGBTQ bias. There are also specialized questions for transgender people as well as those who are bisexual or pansexual.

"This will give us a chance to look at the quality of care people are receiving," said Amanda McAllister-Wallner, director of the statewide LGBTQ network. "What are some of the factors leading to the health and mental health disparities that we do see?"

The survey launched March 5 and will close April 26. It takes between 10 and 20 minutes to complete depending on what categories people fall under, as some people will be asked more questions than others depending on their answers.

The grant marked the first time the advisory panel had funded an LGBTQ project since voters created it with the passage of Proposition 63, the Mental Health Services Act, in November 2004. Commissioner John Boyd, Sutter Health's CEO of mental health services, pushed for awarding of the grant.

"The efforts of #Out4MentalHealth are part of the largest effort of the commission to support the voice of consumers and family members through stakeholder advocacy," Elisa Bupara, the commission's spokeswoman, told the Bay Area Reporter. "The #Out 4MentalHealth community survey is an effort to collect data and information about the LGBTQ community and explore the mental health needs and challenges of LGBTQ consumers and their families across the state."

The survey data will be used to develop a state of the community report, explained Bupara.

"The report will establish areas of need for this often un- or under-served — and often inappropriately served — community and offer some solutions and action agenda items to support the needs the report reveals," she said.

Boyd, a gay man who joined the commission in 2013 and served as chair last year, did not respond to a request for comment.

The goal is to have at least 3,000 people complete the survey. Within 17 days 700 people had done so. Several $50 gift cards and a number of $25 and $10 ones will be raffled off as an enticement for people to take the survey.

"I am really, really excited to see the results of this survey," said McAllister-Wallner. "We constantly butt up against a lack of data in the advocacy work we do. I know my colleagues in LGBT advocacy struggle as well."

She expects the survey results will be released in August as a follow-up to last year's report "Mapping the Road to Equity: The Annual State of LGBTQ Communities, 2018." One of the findings in the report was that "a sizable proportion of therapists are not adequately trained or even willing to serve trans clients."

It also determined that providers who know their client is LGBTQ "either focus too much or too little on their patient's sexual orientation or gender identity, especially in the identification of risk factors for health outcomes."

One of the issues McAllister-Wallner hopes the survey will shed some light on is where are LGBTQ Californians receiving mental health services. In more rural sections of the state, she has heard reports that there are no LGBTQ-affirming mental health providers.

"One of the questions the survey asks is how long does it take someone to access care in their area or do they have to drive for three hours to get care," she noted. "There have been a lot of anecdotal stories of things like that, but we have never been able to quantify that before."

Having such information, said McAllister-Wallner, will mean advocates can "work with health care providers and insurers in the state to improve the accessibility to mental health care for LGBT Californians."

To complete the survey, visit https://californialgbtqhealth.org/community-survey/.