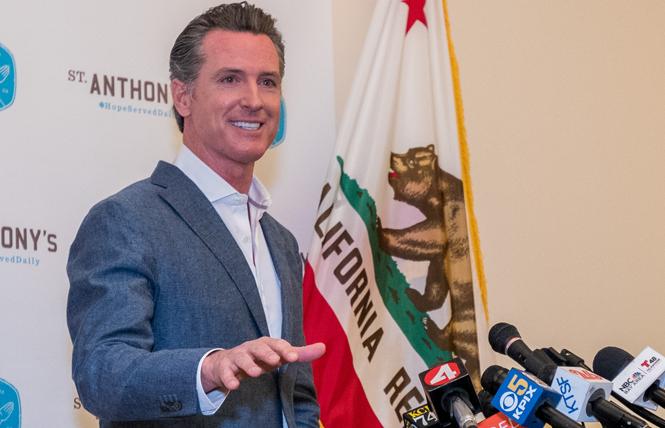 Governor Gavin Newsom is open to developing a statewide plan to end the interrelated epidemics of HIV, hepatitis C, and sexually transmitted diseases like syphilis and gonorrhea, the Bay Area Reporter has learned.

Since last year's gubernatorial campaign, Californian AIDS agencies and providers of STD services have called for the state's top leader to embrace an integrated approach to ending the trio of epidemics. As the B.A.R. first reported in February, the advocates are also seeking $60 million in dedicated funding in the state budget to address the correlated health issues.

The advocates had met with Newsom's transition team to explain why a coordinated statewide strategy is needed. Rather than presenting a detailed plan to the governor, they prefer seeing him establish an End the Epidemics task force that would flesh out a proposal.

Last week, the advocates renewed their call for Newsom to endorse the statewide plan by releasing a community consensus statement signed by 133 organizations across the state. Those signing on included SFAF, the AIDS Project of the East Bay, the Desert AIDS Project, the Gay and Lesbian Alliance of the Central Coast, the Los Angeles LGBT Center, and the San Francisco Department of Public Health.

"California has an opportunity to lead the nation and develop the first statewide strategy to simultaneously address HIV, HCV, and STDs," stated Craig E. Thompson, CEO of APLA Health. "Governor Newsom showed decisive leadership in endorsing a statewide initiative to end the HIV and HCV epidemics during his campaign. We are eager to partner with him to fulfill that commitment and urge his administration to address California's skyrocketing STD rates as part of this effort."

Gay lawmakers state Senator Scott Wiener (D-San Francisco) and Assemblyman Todd Gloria (D-San Diego), the chair and vice chair of the Legislative LGBT Caucus, respectively, also called on Newsom to back the statewide plan in a March 8 opinion piece in the Sacramento Bee. In it they wrote that California "is falling behind in addressing" the trio of epidemics. They noted that the Golden State has the most cases of chlamydia, gonorrhea and syphilis of any state, as well as ranks first in the number of new HIV cases.

"California has the tools, resources, and knowledge to do what it takes to end these epidemics," they wrote. "Now, Gov. Newsom and the Legislature must act. Together, we can get the job done."

Asked about the dual public statements released last week, a spokesman for Newsom told the B.A.R. that the governor welcomes seeing a formal proposal from the coalition of health groups or legislation submitted by the lawmakers.

A similar legislative approach is being pursued to address the needs of California's growing senior population. Days after state Senator Hannah-Beth Jackson (D-Santa Barbara) introduced legislation last month requiring the development of a master plan for aging Californians, Newsom voiced his support for it during his State of the State address.

One person who would be key to implementation of an STI statewide plan is the chief of the Office of AIDS within the California Department of Public Health. Serving in the role on an interim basis at the moment is Marisa Ramos, Ph.D., who had been acting chief of the Surveillance, Research & Evaluation Branch in the state AIDS office.

Melgar told the B.A.R. it is unclear when Newsom will name a permanent chief for the office. Last Wednesday, March 6, Newsom appointed pediatrician and director of health and social impact for Los Angeles County Dr. Mark Ghaly as his secretary for the California Health and Human Services Agency.

Ghaly, 44, of South Pasadena, had been medical director for the Southeast Health Center, a public health clinic in San Francisco, from 2006 to 2011. Newsom also reappointed Michelle Baass, 44, of Sacramento, as undersecretary of the state health agency, which overs the statewide public health department.

To read the community statement about the need for a statewide STI plan, and to see the entire list of co-signers, visit https://bit.ly/2CgY1RU.