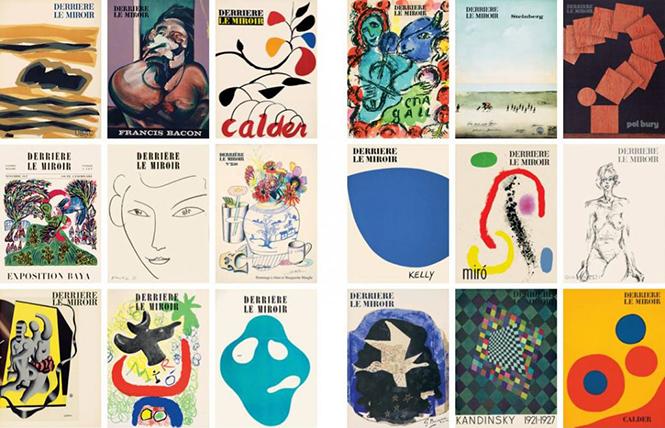 Last Friday night Out There attended the opening-night party for the final exhibition at Jules Maeght Gallery, a blue-chip art gallery that has made its home at 149 Gough St. in San Francisco for five years. When the show's run ends on March 23, the gallery will close up shop.

It's been great having a really interesting gallery in Hayes Valley, OT's home neighborhood, a veritable bonanza for pricey restaurants and expensive quaffs, but not really a gallery hub. Gallerists Jules and Amelie Maeght sure staked out their territory, and have presented top-shelf international artists during their time here. They come from a famous art-gallery family based in Paris, which has included trusted dealers for Alexander Calder and Joan Miro. During the gallery's life, they have presented works by art stars like Ellsworth Kelly and Dave Eggers. They return to France at the end of the month.

OT got a chance to thank Jules Maeght for bringing their vision to Hayes Valley, and to meet curator Luc Sokolsky and gallery patrons. The show, "a la prochaine," includes works by artists who have been affiliated with the gallery over the years, such as local artist Kal Spelletich, whose interactive pumping heart installation was the focus of much fascination. The Maeghts also put out palm cards from many of the exhibitions they've mounted, and OT chose three from some favorite shows to take home.

First there were the black-and-white photographs of "Janet Delaney, New York City 1984-1987," urban landscapes and candid portraits that capture a time and place that will never be the same again. Delaney's work was shown at the gallery simultaneously with photographs from her "South of Market" series from the 1970s and 80s that was given a show at the de Young Museum in 2015.

Then there was the exhibit devoted to issues of "Derriere Le Miroir," the art review published by Aime Maeght from 1946-1982, devoted to contemporary art, printing, writing and collaboration. Filled with original lithographs, the journals included critics' reflections on the art of their contemporaries, i.e., Jean-Paul Sartre on Alberto Giacometti, or Louis Aragon on Marc Chagall. We eat this kind of stuff right up.

Finally there was the exhibition "Tracey Snelling, Asphalt Jungle," devoted to the artist's diorama-like creations of houses, favelas and cityscapes, animated by neon lights, tiny LED screens and collaged photos and sounds. In Snelling's sculptures, it's as if we're looking inside private dwellings, seeing what they're watching on TV: a soccer game? A boxing match? Highly stimulating.

In other art news, reader Daniel Detorie wrote in with a gallery tip. "Went to the opening of the Charley Brown show at Dolby Chadwick last night.

"Charley Brown died in November, and Lisa Dolby Chadwick did this last show of his amazing minimalist works. He went to school at Humboldt with [artist] Martin Wong. He did the murals for the gay and lesbian room at the Main San Francisco Library and the murals over the entry to the Monadnock Building on Market Street (with Harvey Milk in the clouds). When not doing murals and finishes for rich clients around the world with his life/business partner Mark Evans (Evans & Brown), he also painted beautiful large abstracts. One is in the collection of the Crocker Art Museum [in Sacramento], and one is in the collection of Berkeley Art Museum.

"If you find yourself downtown in the next few weeks, go by Dolby Chadwick Gallery, 210 Post St., #205. You won't be disappointed."