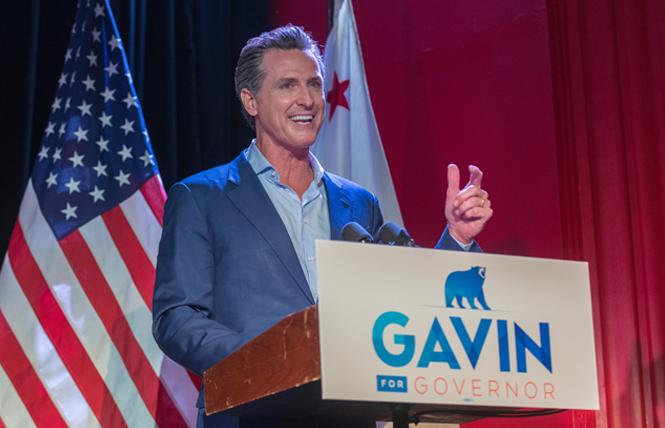 The Trump administration's attack on transgender people was brought into sharp focus Tuesday when the U.S. Supreme Court — now with a conservative majority thanks to the confirmation of President Donald Trump's nominees Neil Gorsuch and Brett Kavanaugh — granted the administration's request to temporarily vacate two national injunctions that had prevented the president's ban on trans people serving in the military from going into effect. This is a huge legal setback as many legal observers believe the ban will now be enforced. An injunction in a similar lawsuit against the ban remains in effect, but it is likely only a matter of time before it, too, is lifted. "As a practical matter, this is bad for the transgender community," said Jennifer Levi, director of the Transgender Rights Project for GLBTQ Legal Advocates and Defenders, which is representing some of the plaintiffs involved in the four lawsuits.

The court's action clearly shows that the majority of justices are signaling that they are generally inclined to support the trans military ban.

The Williams Institute at UCLA School of Law estimated there are 15,000 trans service members in the military, and over 130,000 trans veterans.

Military service is just one area in which the administration has proved itself hostile to trans people. Various federal departments have systematically undone just about all of the policies established by the Obama administration to protect trans people, and a Republican-controlled Senate guarantees little progress can be made despite Democrats taking control of the House of Representatives. When it comes to federal judicial nominees, the LGBT community can expect only nominees who share the president's view.

Thankfully, the situation is better at the state level, especially in California. With the swearing in of Governor Gavin Newsom, the former San Francisco mayor who made his mark in 2004 when he ordered city officials to issue marriage licenses to same-sex couples, the Golden State is poised to usher in a new era in the pursuit of equality. And to us, that means appointing qualified LGBT people to the state's courts — at all levels.

Newsom's decision earlier this month to name state Appeal Court Justice Martin Jenkins as his judicial appointments secretary creates an unexpected opening on the San Francisco-based bench that he likely will soon fill. He could make history by naming a qualified out bi or trans person to the seat.

In an editorial last year, we urged former Governor Jerry Brown to pick an out LGBT person for the long-vacant state Supreme Court vacancy. While he did not do that, our Political Notebook reports this week that there is already an extremely qualified trans Superior Court judge who applied for the appeal court last year and should be considered by Newsom and his team. She has the backing of Bay Area Lawyers for Individual Freedom, whose co-chair told us the LGBT legal group "believes it is essential to have someone with the transgender perspective behind the bench."

BALIF also came out swinging against the Supreme Court's action in the trans military cases, saying it was outraged.

"The Supreme Court is acting as an enabler of the Trump administration, supporting the president's cruel and outrageous preoccupation with clearing the military of brave, honorable, patriotic and hard-working service members simply because of their gender identity," the BALIF board said in a statement.

It's important that California's judges reflect the communities they serve. That's why Brown appointed a number of diverse people to Superior Court vacancies over the years, men and women of various ethnic backgrounds who bring their life experiences to the bench. The same is true for LGBT people, and Brown named many of them to the lower court. Brown also appointed two lesbians and two gay men to the appellate court. But there has never been an out bi or trans appellate justice.

Newsom can change that. He should seize the opportunity.

Good school board pick
While we're disappointed that Mayor London Breed did not choose a transgender or LGBT person for the vacant seat on the San Francisco school board, we applaud her appointment Tuesday of Jenny Lam. The board was lacking an Asian-American commissioner. Lam is a parent of two children attending San Francisco public schools and that voice is important as well.

A straight ally, Lam is currently the education adviser for the mayor's office. She replaces Matt Haney, who resigned the seat earlier this month when he became the District 6 supervisor.

Lam said in a statement that she's excited to serve on the school board. She has seen the challenges facing public education, as well as the "immense positive impact educational opportunity can have on the lives of our children and our families."

Lam will be required to run in a special election in November to serve the remainder of Haney's term. The winner of that election will need to run again in November 2020, which is the normal election cycle for the four-year seat.

We'll be watching Lam as she starts her board service and seeks voter approval. There are serious issues facing the district, including bullying, lack of affordable housing for teachers, and the school assignment policy, to name a few.

As with every election, it's not too late for qualified LGBT candidates to consider running so that there can be a vigorous debate on the district's future.