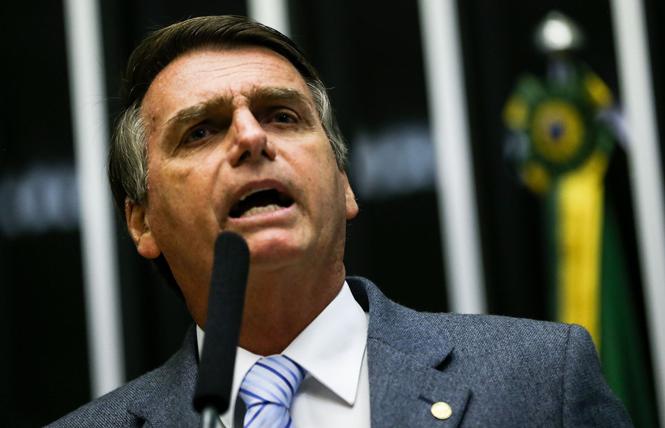 Jair Bolsonaro, Brazil's new president, didn't waste any time attacking the country's minority communities, including LGBTs, when, hours after his inauguration, he signed a slew of executive orders removing some rights.

The orders also affect the country's indigenous groups and descendants of slaves.

The January 2 order affecting the LGBT community removed sexual orientation and gender identity from being considered by the new human rights ministry.

Bolsonaro is a staunch critic of what he calls "gender-based ideology." He considers the LGBT community to be a threat to Brazil's Christian values.

Damares Alves, the new minister of the office now called the Ministry of Women, Family, and Human Rights, also didn't address LGBT issues in her first address in the position.

Alves, an ultraconservative evangelical pastor, simply stated, "The state is lay, but this minister is terribly Christian."

She stated that in the new administration that there would be "no more ideological indoctrination of children and teenagers in Brazil."

However, Alves, who met with members of the LGBT community in December, attempted to reassure them that their rights will not be affected by the "naming issues."

Brazil has one of the world's highest murder rates for LGBT people. Bolsonaro has repeatedly disregarded the need for policies and laws to combat homophobia and transphobia, reported Pink News.

The Associated Press reported that Bolsonaro may target the Education Ministry's program promoting diversity in public schools and universities by closing it.

Bolsonaro, who has been dubbed "Trump of the Tropics," is a fan of President Donald Trump.

Trump congratulated Bolsonaro in a tweet after he was sworn into office.

"Congratulations to Brazil's new President Bolsonaro," she tweeted January 2. "It's great to have another U.S.-friendly leader in South America, who will join the fight against dictatorships in Venezuela and Cuba, and who clearly understands the danger of China's expanding influence in the region."

Same-sex marriage isn't recognized in Hong Kong. However, there have been numerous challenges to the lack of recognition of same-sex relationships in recent years.

In the current case, TF, 21, a student, and his boyfriend, STK, 20, argued for same-sex marriage before the high court. The couple, identified in court documents by their initials, told the court during a preliminary hearing January 3 that the lack of having a law to recognize their relationship went against the city's Bill of Rights and mini-constitution, or Basic Law, violating their rights.

The couple already married in New York. STK took issue with their marital status not being recognized in Hong Kong. He also asked the court to address binational marriages.

The two judicial reviews were lodged last year. The documents weren't available to the public due to the sensitive nature of the case, reported the South China Morning Post.

Not everyone is for the couple. Critics believe that if the court rules against the case it could send the community backward for decades.

"Launching that case prematurely without laying a proper foundation could be disastrous, as under our system of law, an adverse precedent could take many years to overcome and end up delaying change for decades," said a human rights lawyer who requested not to be identified.

The judge allowed the two judicial reviews to move forward but suspended them to deal with a similar case first.

That case involves MK, a 29-year-old lesbian, who is seeking a civil partnership system in Hong Kong. The case would cover many of the issues found in the men's applications.

Gay legislator Raymond Chan Chi-chuen said he was aware of the dilemma and discussed the possibility of other people joining the lawsuit.

There were no casualties. The December 30 incident is under investigation.

The staff received an outpouring of support on social media, for which they said they were grateful.

J-FLAG representatives told Global Voices that they plan on rebuilding.

Pakistan's transgender community had a reason to celebrate. Last May, the Transgender Persons (Protection of Rights) Act 2018 was passed into law.

Transgender Pakistanis are hoping the law will give them more leverage.

However, life is still difficult for transgender Pakistanis. In 2018, there were eight cases of gang rapes, Farzana Jan, provincial president of TransAction, told reporters.

Video of three of the transgender women victims went viral. Some of the men were arrested in that case.

Farzana added that more than 100 cases of violence against transgender people were reported that year too.