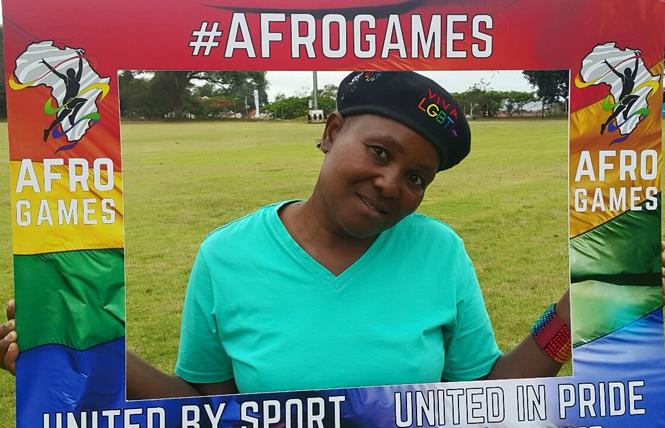 The participation numbers were a fraction of what organizers first dreamed of. Competitions were able to be held in only two sports. To make matters worse, it rained like crazy. Take all of that into account and the inaugural AfroGames held last weekend were a rousing success, promising hope for the future.

"I am happy that we were to host the AfroGames despite all the challenges, from an organizational point of view to challenges during the events," founder Hlengiwe Buthelezi, treasurer of KwaZulu Natal LGBT Recreation and an at-large board member of the Federation of Gay Games, told the Bay Area Reporter. "Honestly, I'm overwhelmed that this dream finally came true and nothing can sway us now."

The AfroGames were held in Durban, South Africa after several years of planning. From the get-go, organizers faced financial, communication, and marketing issues on a continent with a post-colonial legacy of homophobic criminal laws — in some countries, including the death penalty for homosexual acts.

Then again, that's largely what made the effort worthwhile.

"When were speaking to the Ugandans, we had to hide and had to change different numbers and emails, because if the government realizes you're an activist, it starts to tap your phone number," Buthelezi said. "Keeping in contact was difficult."

Buthelezi, 39, has competed in numerous Gay Games and built the AfroGames around that vision.

"We're using the games in uniting people for inclusivity and use them to break the stigma of homophobia because most African countries have not decriminalized homosexuality," she previously told Gay Star News. "So what we wanted to do was to spread education through the sports and the arts."

As organizational efforts adjusted to political and financial realities, plans for the athletic events were eventually cut down to five sports: netball, soccer, rugby, athletics, and squash. Then the rain hit, driving participation down further and forcing some events to be adjusted or dropped.

"Unfortunately, not all of the planned sports were played because of heavy rain," Buthelezi said. "Soccer had to be canceled because of the rain. Squash had no turnout — players didn't arrive despite having RSVPed. The rugby on the first day had not much turnout due to pouring rain throughout the day, but we compensated by doing rugby coaching clinics."

In the end, competition was held only in netball and track and field. Overall, roughly 50 athletes competed.

The sports events were followed on Monday, December 10, International Human Rights Day, with a "Decolonizing LGBTI Rights in Africa" symposium.

"We had such a phenomenal delegation with most organizations represented — even Uganda and Nigeria were represented," Buthelezi said. "Our keynote speaker, Judge Edwin Cameroon, couldn't make it unfortunately, but sent us a video clip that we played at the beginning of the symposium."

Buthelezi, who has been with her fiancée, Nompilo Ntuli ("She's such a phenomenal woman!") 10 years, said about 80 participants attended the symposium.

"I was delighted to share with people the insight on what the Gay Games are and how they are a life-changing experience, hence AfroGames," she said. "To this day, I am really grateful to the Gay Games scholarship team that made it possible for us to be able to participate in Gay Games. The FGG is such a significant body from which I got the experience and was motivated to make a difference in Africa."

"Whew! I am overwhelmed by the fact that it ultimately happened despite all the challenges we faced," she said. "The main challenge was the funds. Thanks to the Other Foundation and some FGG members who donated to our GoFundMe account."

Photos and videos from the event are available on the Afro Games 2018 Facebook page.