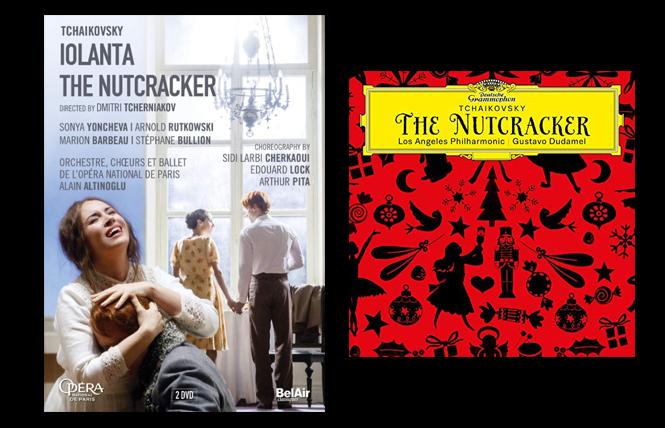 Tchaikovsky-savvy consumers will grock what's going on right from the cover of the new Paris Opera and Ballet pairing of Tchaikovsky's one-act opera "Iolanta" and two-act ballet "The Nutcracker" (BelAir). The pieces were first performed, together, on Dec. 12, 1892, in St. Petersburg's Mariinsky Theatre. Of the two, "The Nutcracker" was the dud. Lost future royalties from it is my current explanation for the composer's unsolved death. With this brilliant re-coupling, fans of director and set designer Dmitri Tcherniakov may find their mouths watering for his forthcoming Wagner "Ring" at the Bayreuth Festival. This Paris double bill is a beaut.

Tcherniakov's claustrophobic "Iolanta" (cunningly so, in context) is updated to a post-Tsarist Russia somewhere between Khrushchev and the oligarchs, and set in the main room of the country estate where King Rene has ensconced his daughter Iolanta to keep her from learning she is blind. Although the cure, we're told, is her really, really wanting to see, the music tells us the cure is love.

The transposition to the manor's main interior room robs the fairytale of some of its magic, but Tcherniakov promises to reward your indulgence by putting a Christmas tree in the corner, thereby first signaling Iolanta's blindness by her identification — by touch, pricking her fingers in the process — of the star and angel ornaments. The cast is strong throughout, with Alain Altinoglu a sure dramatic hand and superb colorist in the pit.

As often, the wonder is Tcherniakov's uncluttered storytelling, so vivid you could follow the action without subtitles. Sonya Yoncheva's fans will appreciate her immaculately sung, frequently affecting Iolanta, while those like me will wonder where the pathos became lost luggage among her careening repertory choices.

Special mention also goes to Vito Priante as the Moorish doctor charged with fixing her vision (or else) and Elena ("Don't call me veteran") Zaremba's perfectly gauged Marta. After a dramatically apt tentative beginning, tenor Arnold Rustowski's Vaudemont reaches peaks of ringing ardor that had my eyes opening well before Iolanta's.

The segue to "The Nutcracker" is so seamless it's hard to tell where the actual intermissions fell in Paris, if clearly not at the expansion bridge between the two works. A telltale, ghost-like, silent young woman, who had previously kept to the fringes of the action before insinuating herself into the shy embrace of the newly betrothed Iolanta and Vaudelmont, is promptly repurposed as Melisande-like Marie (Tchaikovsky's Clara). The Christmas tree moves downstage as the Yuletide festivities and gift-opening begin. It's stagecraft at its most advanced as Tcherniakov's blocking morphs into choreography by Sidi Larbi Cherkaoui, Eduoard Lock and Arthur Pita without our quite registering the shift to dance.

One can no more fault directors from departing from Modest Tchaikovsky's libretto than modern choreographers from bidding fond farewell to Petipa and Ivanov. Tcherniakov's libretto — "Marie is in the middle of a horrifying landscape. Images of volatile, fragile civilization. Everything breathes death here." — dissuades you from keeping an eye out for the sugar plum fairies, but theatrically, that moment well into the action is a coup de theatre. The estate, of which we've grown genuinely tired, is instantaneously decimated, and we're suddenly, jarringly in some Babi Yar "Nutcracker." Marie (transfixing ballerina Marion Barbeau), plagued with more than a few doubles thus far, is as alone as Manon Lescaut on the Louisiana desert — until, finally, Vaudemont (the almost preposterously handsome, tall, lithe Stephane Buillon) appears. Their pas de deux, smoky in every sense, builds until, in the instant before its climax, Marie's Prince falls to the ground, dead, departed or something. Missed, to be sure.

We're eventually transported to a sequence of bright new interiors, populated by scary giant toys that may presage Tcherniakov's Fasolt and Fafner. The corps does some outright dirty dancing before reverting to balletic ensembles. Gleb Filshtinsky's lighting nearly steals the show.

Vaudemont reinserts himself into the festivities, raising the temperature far above a Russian Christmas, only again to fall literally flat after another mesmerizing meld with Marie. She is now unmistakably sola, perduta and abbandonata, until the naughty, awakening children lighten the spirits again. By the time the grown-ups reappear in this nearly childproof "Nutcracker," you've been somewhere and back.

If your holiday preference runs to the more traditional, there is a new, complete "Nutcracker" (audio only) from DG. Although recorded live in 2013, it's the curious first fruit of a new partnership between the LA Philharmonic, now the world's no-doubt-about-it most innovative orchestra, and classical music's increasingly most retrograde record label, Old Yeller. Gustavo Dudamel is predictably perky.

If you turn up the sound, lie back and think of Mother Russia, something noteworthy may happen to your nuts. But I assure you I am nowhere near done with Tcherniakov's mind-altering "Nutcracker."