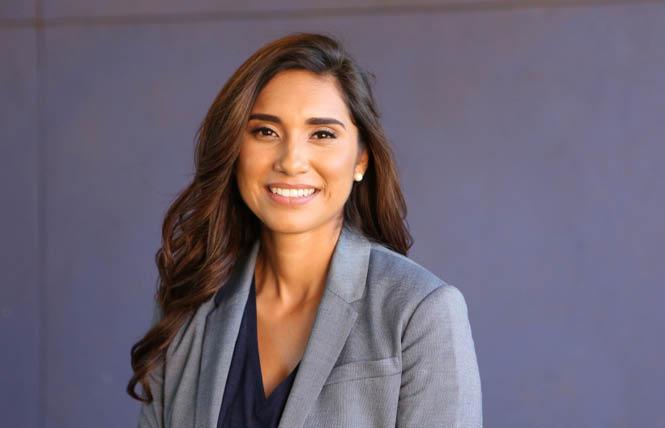 Assemblywoman Sabrina Cervantes is holding onto a lead in her re-election race. Photo: Cervantes for Assembly campaign

The freshman incumbent lawmaker had been seen as the most vulnerable of the four LGBT state legislators seeking re-election this year. Republicans, upset at seeing her flip the 60th Assembly District seat to the Democratic column in 2016, had targeted her for defeat.

And they had hoped to use her vote for a hike in the state's gas tax against her. In fact, her GOP opponent, federal prosecutor Bilal "Bill" Essayli, launched his campaign at a gas station.

Cervantes awoke the morning of November 7 to learn she had a three-vote lead over Essayli. Over the next few days the vote count yo-yoed between the two, but by the following week Cervantes had begun to break away.

As of Sunday, with a new vote tally released by the Riverside County Registrar of Voters, Cervantes was leading challenger Essayli by a margin of nearly 5 percent. As of Monday evening, she was leading with 4,724 votes.

While there are still ballots to be counted, her campaign announced Monday evening that Cervantes was now confident that she was re-elected by a majority of the voters in her district.

"Representing the people of Western Riverside County in the Capitol has been the greatest privilege of my life. I am so humbled by the trust that voters from all walks of life and all political affiliations have placed in me by choosing me to once again represent their families in the state Assembly," stated Cervantes. "I am committed to continue getting things done to help Riverside County families and move our region forward."

Cervantes represents Corona, Eastvale, Jurupa Valley, Norco, and portions of the city of Riverside. She chairs the Assembly's Select Committee on Veteran Employment and Education and serves on a number of other committees, including Banking and Finance; Communications and Conveyance; and Jobs, Economic Development, and the Economy.

The Bay Area Reporter had already reported that Cervantes would win re-election. Her victory means that the California Legislative LGBT Caucus will have seven members come December when the winners of the November elections are sworn into office.

The caucus is losing one of its current eight members, gay state Senator Ricardo Lara (D-Bell Gardens), as he won his race for state insurance commissioner. Lara is now the first out LGBT person elected to a statewide office in California.

Because none of the non-incumbent LGBT legislative candidates won their races this year, the caucus will see its membership shrink for the third time since it was established in 2002.