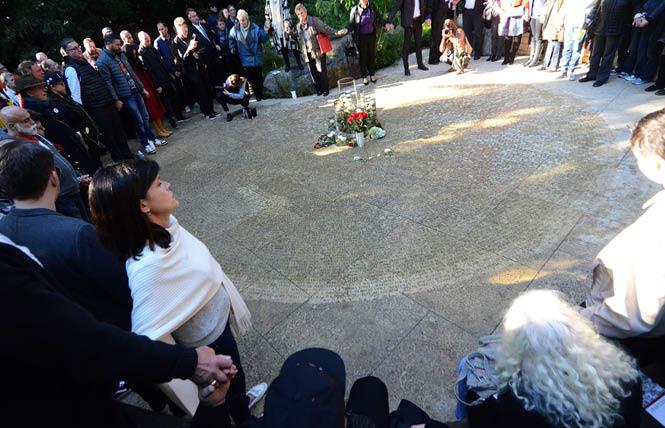 World AIDS Day was celebrated in the National AIDS Memorial Grove in Golden Gate Park in 2016 by the reading of names newly inscribed into the Circle Of Friends. Photo: Rick Gerharter

In commemoration of World AIDS Day, December 1, several San Francisco organizations are holding events. The day, founded in 1988 by the World Health Organization and UN AIDS, is meant to unite people in the fight against HIV, show support for people living with HIV, and remember those who have died from the disease. It was the first-ever global health day, according to http://www.WorldAIDSDay.org.

Located in Golden Gate Park, the ceremony is expected to welcome over 750 guests under the stars.

Held on the eve of World AIDS Day, the event allows attendees to view the grove's Circle of Friends, considered the heart of the memorial, illuminated with hundreds of candles. The Circle of Friends is a large flagstone circle engraved with over 2,500 names of people affected by AIDS, including those who have died, family members, and donors to the National AIDS Memorial Grove.

Guests then walk through the Redwood Grove to a warmly-lit banquet tent where cocktails, hors d'oeuvres, and a buffet dinner is served as musical performances are held.

John Cunningham, executive director of the grove, called the night a "magical experience."

"It's a fabulous, beautiful, and magical evening that brings great spirit and heart and love and compassion into one singular evening," he told the Bay Area Reporter.

This year's Lifetime of Commitment honoree is longtime AIDS activist and outgoing grove board chair Michael Shriver. Shriver, who is HIV-positive, has been involved in AIDS activism for more than 35 years. He first began as a volunteer in 1985 for the Shanti Project, a nonprofit dedicated to enhancing the health and quality of life of people with terminal illnesses including AIDS. He went on to become health commissioner and executive director of Mobilization Against AIDS and eventually a grove board member in 2009.

The grove is located in the eastern end of Golden Gate Park at the intersection of Bowling Green and Middle Drive East (Nancy Pelosi Drive), across from the tennis courts. Tickets for the evening start at $250 and are available at https://www.eventbrite.com/e/light-in-the-grove-2018-tickets-49106226044.

The grove will also host a World AIDS Day observance Saturday, December 1, from noon to 1:30 p.m. The event is free and open to the public. It will include an awards ceremony, a presentation exploring how the Asian and Pacific Islander community has been affected by the HIV/AIDS epidemic, and musical performances by the San Francisco Gay Men's Chorus and Emmy-nominated actress and singer Parris Lane.

The Thom Weyand Unsung Hero Award will be given to the Recollectors Project, a website and oral history project telling the stories of children who lost parents to AIDS. Cunningham called this community "invisible," due to the lack of awareness it has received.

The Humanitarian Leadership Award will be presented to husband and wife Al and Jane Nakatani. The couple have lost all three of their sons, two from HIV/AIDS and one from homicide. Authors of the book "Honor Thy Children," the Japanese-American couple have dedicated their lives to sharing their stories in public speaking events. In 1999, they founded Honor Thy Children, a nonprofit that made it easier to facilitate their work.

According to a grove news release, the couple encourage other Asian and Pacific Islanders to stand with them, share their stories and, "demand inclusion, and demonstrate compassion for those impacted by denigration in general and by HIV/AIDS more specifically."

More information can be found at https://aidsmemorial.org/programs/world-aids-day-2018/.

"The summit is going to include scientific content, but also a fair dose of community-oriented content," said Rowena Johnston, vice president and director of research at amfAR, in an interview with the B.A.R. "We will be sharing our challenges, barriers, and how we are working toward overcoming those challenges and barriers and we want to hear from the community about their efforts and how they want to participate in advancing a cure."

The summit will host UCSF researchers involved in upcoming cure-focused clinical trials, community advocates working on behalf of people living with HIV, and scientists applying cutting-edge technologies to the search for a cure.

AmfAR will unveil a clinical trial at the summit that the agency will be working on in the future. The trial aims to bring together a combination of interventions that may enable people suffering from HIV/AIDS to stop taking antiretroviral medications and allow their immune system to fight the infection alone.

The event will be held Wednesday, November 28, from 1 to 5:30 p.m. at the Robertson Auditorium on the UCSF Mission Bay Campus, 1675 Owens Street. There is no cost to attend. For more information and to RSVP, visit https://www.amfar.org/2018summit/ or contact Alexandria Parker at alexzandria.parker@amfar.org or (212) 806-1621.

Listen Up! Voices of AIDS activism
The GLBT Historical Society will hold the first public showing of video interviews from the organization's ongoing San Francisco ACT UP Oral History Project. The videos, which document the history of direct-action AIDS activism in the Bay Area, will be shown at the GLBT History Museum Thursday, November 29, from 7 to 9 p.m. The museum is located at 4127 18th Street. Admission is free for members and $5 for non-members.

The videos, the entirety of which will eventually be made available to researchers, are meant to provide "new insights into the contributions of activists as LGBTQ people and people with AIDS fought against the epidemic and the lethally slow response of the government," according to a news release.

Tickets are available online at https://bit.ly/2DT2gpS.

Grace Cathedral
Grace Cathedral will commemorate World AIDS Day with an AIDS Memorial Quilt Concert Saturday, December 1. Starting at 7:30 p.m., live performances from the AIDS Quilt Songbook will be performed by the cathedral's male choir. The AIDS Quilt Songbook is an ongoing collaborative series of songs written in response to the stigma and grief surrounding the spread of HIV/AIDS. It is meant as a musical companion to the NAMES Project AIDS Memorial Quilt, some panels of which are currently on display in the cathedral's AIDS Interfaith Memorial Chapel.

"The AIDS crisis is so hard to describe to younger people. It was a horrifying experience in San Francisco to have so many beautiful, creative, vibrant young people dying in a mass plague," the Very Reverend Dr. Malcolm Clemens Young, dean of the cathedral, told the B.A.R. "This is a time for people to remember the lives lost and all those affected by AIDS."

Candlelight vigil
The San Francisco AIDS Foundation will host a candlelight vigil in honor of World AIDS Day Friday, November 30, from 5 to 6 p.m. The vigil will honor the lives lost from the disease. Attendees will meet outside the SFAF office, 1035 Market Street, and walk together to San Francisco City Hall.

The walk is free and open to the public. Candles will be provided. For more information, visit https://www.facebook.com/events/348115012611644/?active_tab=about.

Oakland LGBTQ center
The Oakland LGBTQ Community Center will celebrate LGBT volunteerism on World AIDS Day, December 1, from 3 to 6 p.m. at the center, 3207 Lakeshore Avenue (enter on Rand). In partnership with TurnOut, an LGBTQ volunteer organization, the center will hold an award ceremony focusing on volunteerism in the queer community and those who serve the center.

"Speakers will discuss the many ways volunteers stepped up to help those living with HIV/AIDS during the first few waves of the epidemic and the state of volunteering today," said Joe Hawkins, executive director of the center. "We will also be awarding volunteers who continue the legacy of volunteerism here in Oakland."

There is no cost and interested people are welcome to attend.