Get a sneak peek at senior portrait show at Milk center 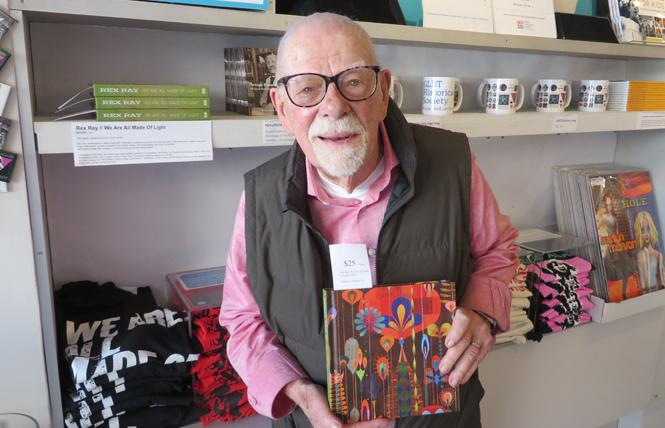 Cees van Aalst, who volunteers at the GLBT History Museum, modeled for the Senior Portrait Project, which will have a sneak peek next week. Photo: Charlie Wagner

A reception next week at the Harvey Milk Photo Center will feature a sneak peek of a new Senior Portrait Project that's scheduled to open in the spring at the Eureka Valley Recreation Center.

The project is being curated and managed by Thomasina DeMaio in collaboration with Adela Dominquez, the facility coordinator at EVRC, located at 100 Collingwood Street.

The works in the senior portrait show have been, and continue to be, created every Tuesday afternoon at EVRC, when participating artists meet with senior citizens recruited from all over the city. According to photographer Billy Douglas, typically three or four models are painted each week.

Those modeling sessions will continue every Tuesday from 12:30 to 3:30 p.m. until December 4.

Douglas became involved with the Senior Portrait Project through his earlier participation in Art Saves Lives, which DeMaio founded. He estimated he's taken about 35 photos so far, 11 of which will be in the November 7 preview of the senior portrait show. Co-curator Dave Christensen, who's director of the Milk photo center, estimated the images of over 30 different models have been captured as of October 17.

He said models were solicited through Art Saves Lives, word of mouth, and posters at EVRC and the Milk photo center.

"Some subjects from the earlier sessions returned with their friends and acquaintances," he said, noting the project is looking for more models.

Since all models are also San Francisco residents, many are LGBTQ, though that is not a criterion for the sessions.

Cees van Aalst is a gay man who volunteered to be painted and expressed his delight with the whole experience.

"I sat for about 45 minutes while Thomasina was painting and two guys took my photograph and another did a drawing," he recalled. "Some of the artists talked while they worked, I think to make me less tense, though I wasn't feeling tense, so I told them how I met the queen of Jordan many years ago."

It's possible the Senior Portrait Project will be exhibited at both EVRC and the Milk photo center, according to photographer and participant Steven Pomeroy, but he said that has not yet been decided.

According to Christensen, the senior portrait show will include an auction of the works, with proceeds going to a new lighting system for the Milk photo center gallery. Douglas explained that its current lighting is fluorescent and the photo center members would like to purchase pin spotlights designed for art works and "gallery type lighting."

In addition to the senior portraits, there will be a contemporary exhibit opening November 7.

At least seven of the participating artists exhibited in the Milk photo center's gay Pride show titled "Art and Pride" in June, and several are senior artists. The show will close Saturday, December 1.

All artists in the show reside in San Francisco, according to co-curators Christenson and DeMaio, and represent a diverse age group and ethnicities. The Milk photo center is one of the largest remaining operating darkrooms in the U.S., according to Christensen, and has been in San Francisco for over 75 years.

A second edition of the contemporary exhibit will open Thursday, December 6, with a reception from 6 to 9 p.m. at the Milk photo center.

Each quarter, the Milk photo center organizes dozens of classes in photography and related topics. For more information, visit www.harveymilkphotocenter.org or call (415) 554-9522.

The Milk photo center is part of the San Francisco Recreation and Parks Department and the exhibits are free and open to the public.

Additional models are still being sought for the Senior Portrait Project. For more information, call (415) 831-6810.

The November 7 reception takes place from 6 to 9 p.m. at the Harvey Milk Photo Center, 50 Scott Street.