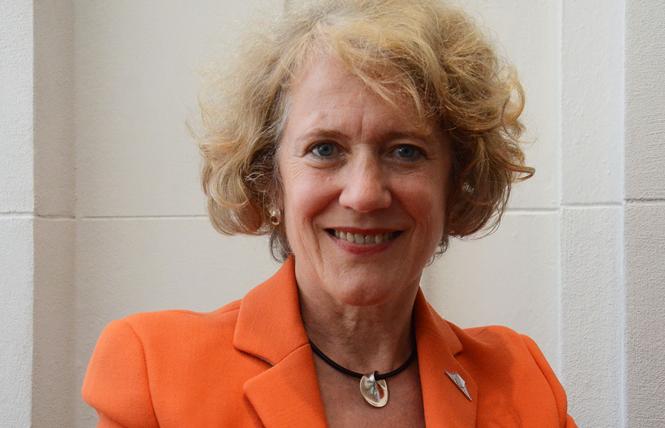 The lesbian mayor of Zurich, Switzerland is in town this week to celebrate the 15th anniversary of the sister city relationship between her city and San Francisco. Corine Mauch had a lot to say when she sat down with the Bay Area Reporter on Monday, October 22, including her thoughts on President Donald Trump, her legislative priorities, and how being a lesbian informs her work.

Her trip coincides with the Zurich Meets San Francisco festival that continues through October 26. The event commemorates the initiative between the two cities launched in 2003 that focuses on sharing knowledge and supporting the development of partnerships between the two like-minded governments.

Mauch, 58, was elected in 2009, becoming the first out lesbian mayor of any major European city after serving on the City Council for 10 years. The member of the Social Democratic Party, who was re-elected in March for another four-year term, is also Zurich's first female mayor.

The B.A.R. spoke with Mauch at the Proper Hotel. She talked about meeting San Francisco Mayor London Breed a few hours earlier, with whom she said she was impressed. They spoke about the similar issues the sister cities have faced, including drug addiction and a lack of affordable housing.

"We have very similar challenges," Mauch said. "I think we can learn from each other and learn from our best practices. Cities are laboratories for solutions for challenges of the future."

Switzerland implemented a four-pillar concept in 2008 to deal with its societal drug problem, which included safe injection sites, something she talked about with Breed.

"You have to find solutions in place," she said. "You can't have just one solution to a very complex problem."

Last month, California Governor Jerry Brown vetoed a bill that would have allowed San Francisco to implement a safe injection site pilot program. Breed, who strongly supported the bill, mentioned her meeting with Mauch at a reception Monday night for LGBT community leaders.

"Today they're doing very well as a city," Breed said, referring to the safe injection sites in Zurich.

Mauch is expected to meet with other city officials throughout the week to discuss topics of climate change, waste disposal, and other environmental issues.

The creation of affordable housing was a large accomplishment during her first term and will continue to be a priority, she said. More than 16,000 apartments were built during her time in office. Providing opportunities and housing to people of all socioeconomic levels is something she wants for Zurich.

"Affordable housing is a very important issue in Zurich," she explained. "We want to deliver possibility to people who are not rich, to poor people as well. We want this diversity in this city."

Zurich, with a population of 402,762, is home to people from over 170 nations, she noted, and that is considered a valuable asset. Being a country open to migrants is something to be proud of, she emphasized. Mauch was born in Iowa. She renounced her U.S. citizenship in 2013, according to Wikipedia.

"In Zurich we have benefited a lot from people coming here with their ideas, potentials, talents, and I think for every city it is important to have this openness and to integrate and include," she explained.

This is a perspective that differs vastly from the current White House administration's anti-immigration laws and rhetoric. When asked about the U.S. president, Mauch said she feels the same way about Trump that many San Franciscans feel, alluding to her disapproval of him.

She called the recent news that the U.S. Department of Health and Human Services has reportedly created a proposal to limit the identification of a person's gender to include only "male" or "female" that is listed at birth, a significant setback for the LGBT community.

Being informed of the news moments before the interview, she did not want to comment further, but emphasized her own goals of "having real and complete equality for everyone" in her city.

Although she is an out lesbian and has been throughout her political career, she feels her sexual orientation did not influence her political success.

"I was not elected for being a lesbian," she said. "I am happy that I am elected and it's not important if I am lesbian or not because it is a part of our population, LGBTQ people."

Being a lesbian has given her a certain sensibility toward minorities, she noted, and that creating an inclusive society is a priority.

She also spoke about her excitement for being in San Francisco. The last time she was here was for the 10th anniversary of the Zurich Meets San Francisco festival.

"It's a fantastic city," she said. "I look forward to continue learning from one another."

On Friday, October 26, there will be an artist workshop with Baltensperger and Siepert, who mint their own coins. The participative workshop is from 2:30 to 6 p.m. at Pier 17.

Food events bringing together Swiss and San Francisco chefs will be held October 25 and 26 at restaurants Rich Table and Nopa.

For tickets or more information about festival events, and to register, visit https://www.zurichmeetssanfrancisco.org/events.