'#Gay' was tagged on fence of candidate's apt. building before he moved in, police say 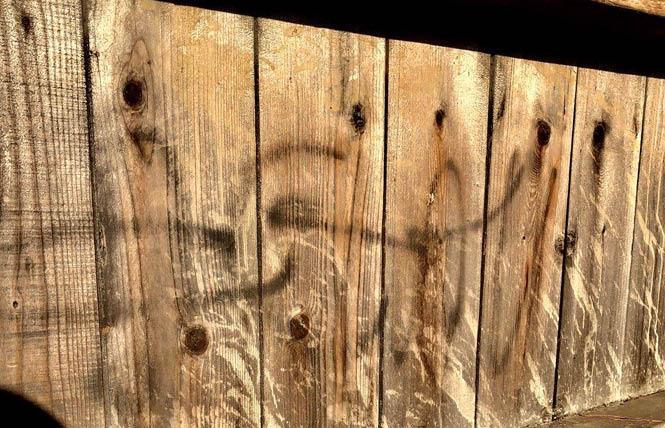 Redwood City police have determined that the #Gay graffiti on a fence outside gay City Council candidate Jason Galisatus' apartment was there before he moved in. Photo: Courtesy Jason Galisatus

Redwood City Police said Wednesday that the word #gay discovered last week tagged on a fence outside the home of gay City Council candidate Jason Galisatus was already there before he moved in.

Last week Galisatus told the Bay Area Reporter that he had come home Thursday, October 11, to find his campaign sign that had been posted on the fence in front of his bedroom, lying on the ground, and what he initially thought was a anti-gay slur on the fence.

According to a Redwood City Police Department report from October 17, the department initiated a criminal investigation and treated the incident as a hate crime.

"Ultimately detectives discovered via Google Maps that the spray paint was present on the fence for several months prior to Mr. Galisatus moving to the address or noticing it. Additionally, because of the faded and weathered condition of the wording, detectives could not confirm whether the wording read: "#GAY," or "#GAU," or "#GAV;" and all three of these hashtags are used widely on social media," the report read.

Police said the campaign sign was either taken down intentionally or fell due to weather conditions.

Galisatus, 25, publicly responded to police findings on the blogging platform Medium. He declined to comment to the B.A.R. on the record and asked only to speak on background.

"I am surprised as anyone at this finding. We talked to our neighbors, landlord, and friends, and no one noticed the message prior to my discovery," he wrote on Medium. "As I have experienced prejudice firsthand in our community, even along the campaign trail, I hope this incident serves as a reminder for all of us that hate still exists, even in our wonderful community."

He also thanked the police department for taking the report seriously.

As previously reported by the B.A.R., if elected, Galisatus said he would be Redwood City's first openly LGBT elected City Council member, and the first out gay person of color elected to any city council in San Mateo County, which includes most of the Peninsula south of San Francisco.

Galisatus' campaign platform includes housing affordability, addressing the city's traffic congestion — including that residents deserve access to more transportation options — and supporting small businesses. Last week he told the B.A.R. that his campaign is going "really well." Although he was the last candidate to enter the race, he has emerged as one of the leading contenders.