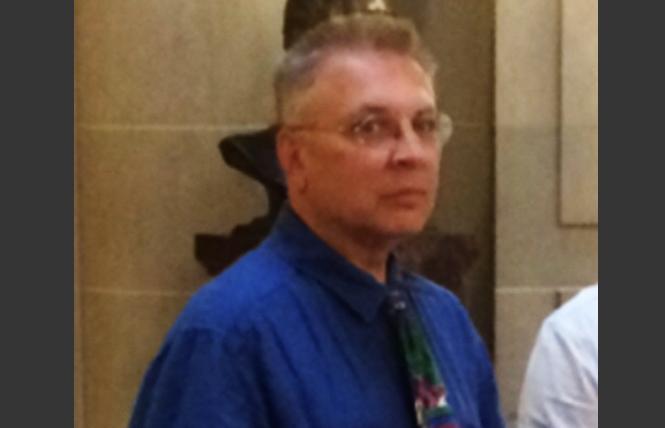 The defense's case opened and closed in two days in the Michael Phillips murder trial in San Francisco Superior Court. Closing arguments are expected next week.

One of the defense's first witnesses was Michael Suchovicki, an investigator with the San Francisco Medical Examiner's office, who arrived at Sheahan's Bush Street apartment August 14, the day Sheahan's body was found by authorities. Maloof asked Suchovicki if he noticed the smell of a decomposing body. Suchovicki testified that he did not smell any odor from a decomposing body when he first entered the apartment. The investigator also testified that he determined Sheahan to have "rigor with slight pressure," and that he "felt some tension" when attempting to pull his limbs in order to test for rigor, which is the stiffening of the muscles after death. Suchovicki also said on the stand that Sheahan's body was warm to the touch.

Maloof previously argued that Sheahan died after Phillips was last seen on surveillance camera leaving Sheahan's apartment August 13, which would have resulted in Sheahan being dead only a day before being found.

The prosecution's witness, Ellen Moffatt, Ph.D., assistant to the medical examiner, testified last week that rigor had not yet started in Sheahan's body.

When answering questions from Kenney, Suchovicki testified that Moffatt has more experience in determining rigor mortis of the body than he does and that he would trust Moffatt's determination of rigor over his own.

Kenney also showed body worn camera footage from a San Francisco police officer who responded to the scene that showed Suchovicki moving bedding around on Sheahan's bed, something Suchovicki said he would not have done if he had believed it to be a homicide. Suchovicki testified that he initially thought it was a suicide and, therefore, did not call for a physician to come to the scene to further examine the state of the body, a best practice protocol. The camera footage also showed Suchovicki entering the kitchen in the apartment without gloves.

"Is it possible that you could have touched items in the apartment with your bare hands?" Kenney asked.

Suchovicki replied, "Yes, it is possible."

Maloof then asked, "Do you believe you touched anything that was suspected to have blood on it with your bare hands?"

Suchovicki replied, "I don't believe I did."

Etheredge testified that he also did not smell the odor of a decomposing body, only the faint smell of a dead body, which he explained occurs when any human dies, an odor different from decomposition.

Maloof showed pictures to the jury that McArthur took, which showed that the building next to Sheahan's apartment was easily accessible through the fire escape outside of Sheahan's kitchen window.

Holly Howard, who was staying alone in her friend's apartment, located on the same floor as Sheahan's apartment, the weekend before Sheahan was found dead Monday, August 14, testified. She told the jury that she stayed in the apartment August 13-15.

On the stand she said she remembers hearing an argument in the middle of the night and that her dogs were startled by it, though she doesn't remember specifically what night it occurred.

"I heard an argument, but I am not sure where it came from. It could have been the back yard, or somewhere from the back," Howard said.

When shown a transcript of her phone conversation between an investigator and herself after she stayed at the apartment, she testified that she told the investigator that the argument sounded like "a bar fight between a man and a woman."

Prosecution rests
Lyn O'Connor, a bloodstain pattern expert from the crime scene investigators unit at the San Francisco Police Department, was perhaps Kenney's most important witness in the case. O'Connor testified October 4 that medical examiners initially deemed the incident a suicide and, therefore, did not follow best practices that would routinely be followed in a homicide.

She testified that she did the majority of her analysis using photos and body worn camera footage from SFPD officers who were at the scene before the medical examiners. Medical examiners moved Sheahan's body along with a tissue box, bedding items, and the medical examiners stood on Sheahan's bed with their shoes and walked through the kitchen. This, O'Connor explained, made it more difficult for her to piece together what happened, though she was still able to determine many things.

She determined that the assailant moved Sheahan's body after he died. A large pool of blood was near his feet, though O'Connor said this pool was likely to have come from Sheahan's head wounds.

"He was moved after being struck," O'Connor said. "The head bleeds a lot. The pool of blood is likely to be from the head injuries."

She continued explaining what possibly happened at the time of the murder.

"He was likely face down when he was struck multiple times, and the attack came from the back," she said.

She, along with other witnesses, all agreed that the scene was very bloody. There was blood found on a bookshelf; all over the floor; on the suspected weapon, a black cordless phone; the couch in the apartment; and more. A large portion of the blood splatter found on the bookshelf and other furniture items was flung from the blows to the head.

The two sets of gloves that have been questioned in this case, a pair of yellow rubber gloves and clear latex gloves, were found shoved in a tissue box, but were moved by medical examiners, O'Connor said. The DNA of two people were found on the rubber gloves, Sheahan and an unknown contributor, and only Sheahan's DNA was found on the latex gloves, as was previously testified by Amy Lee, a criminalist with the SFPD.

Maloof, in his argument that someone other than Phillips and Sheahan was in the apartment at the time of the murder, asked if the medical examiner who moved the tissue box and touched the gloves was also wearing gloves, insinuating that the examiner's DNA would not have been transferred to the gloves.

Maloof also tried to say that testing was not done for all blood samples found at the scene. A photograph of a painting with small reddish colored stains on it was shown in court by the defense.

"Why wasn't this painting examined for evidence?" Maloof asked O'Connor.

"I determined there not to be any blood on it. I didn't believe it to have any evidentiary value," O'Connor replied.

Kenney showed surveillance video of Phillips' multiple entries and exits into Sheahan's apartment on the weekend he was alleged to have died. One clip shows a red stain on Phillips' gray sweatpants on the front of his calf, which appears only after entering the apartment a few times.

"I noticed the stain only after Phillips left the apartment," O'Connor said when questioned about the video. "The stain grows larger at later times."

Kenney then asked, "Is this stain consistent with a blood stain transfer?" A bloodstain transfer, as explained by O'Connor earlier, is when something comes into contact with blood after it lands.

However, Maloof asked O'Connor in response, "Is this stain consistent with any liquid stain transfer?"

Maloof had said earlier in opening statements that it would be next to impossible for someone not to have more blood on them if inside the apartment when Sheahan died.

However, Kenney asked O'Connor, "Could someone have entered the apartment and walked to several areas of the apartment without getting blood on them?"

Some of the most graphic photos shown to the jury were when Moffatt took the stand. Moffatt performed Sheahan's autopsy.

From her testimony it was revealed that the weapon used to kill Sheahan could have been a black cordless phone as the 12 or so injuries on Sheahan's head were consistent with a round edged object. The phone also was found by investigators to have blood and skin tissue from Sheahan.

Kenney showed the jury every head injury that Moffatt had labeled, A-M. Going through them one by one in court, Moffatt determined that each one was likely the result of blunt force trauma, as opposed to sharp force trauma, which is often caused by a knife.

The time of death was also discussed. Maloof has previously argued that Sheahan died after Phillips was last seen exiting the apartment. Surveillance footage shows that Phillips last left Sheahan's apartment through the front door on Sunday, August 13, at 10:30 a.m. Sheahan was discovered and pronounced dead the next day.

Moffatt, however, testified that it is more likely he died 24 to 48 hours before he was found August 14. Though, Moffatt also said it was difficult to determine the exact time of death.

"How likely is it that he died the same morning he was found on August 14?" Kenney asked.

Moffatt replied, "It's less likely due to his lividity being fixed, no rigor, some skin slippage. It's not impossible, but more likely he died before that."