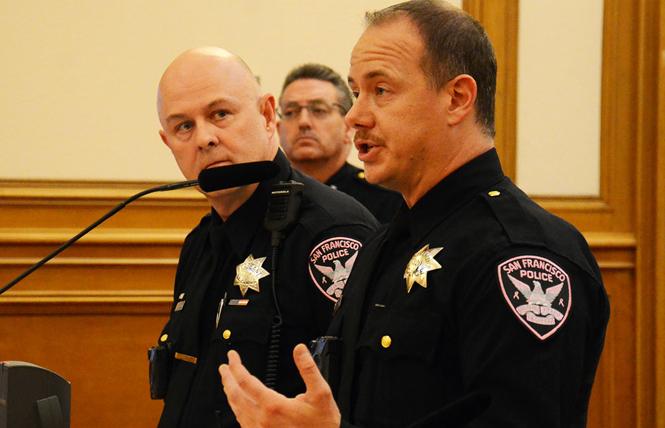 The new department General Order requires officers to refer to transgender, gender-variant, and nonbinary individuals by the person's preferred pronouns. Police officers would also be required to ask individuals for their preference of the gender of an officer who would perform a body search, with a provision aimed at heading off potential abuse of that policy.

During the October 3 meeting, Police Commission President Thomas Mazzucco read a letter from the panel's former president, Teresa Sparks, a transgender woman whom Mazzucco lauded for being "a pioneer in transgender law." Sparks cautioned in her letter that there may be some confusion among officers over whether to identify an individual's gender based on an officer's perception, which is required by Assembly Bill 953, rather than that individual's preference, which is now part of SFPD's policy.

"Former President Sparks is saying that our department General Order actually requires our officers to ask for the individual to identify, whereas in the Assembly bill, it requires the officers not to ask, but to speculate," Mazzucco said.

Lesbian police Commissioner Petra DeJesus noted that, while she supported the new policy, she questioned why an individual's choice over the gender of the officer who would conduct a strip search could be overridden by a supervisor.

SFPD's transgender liaison Officer Broderick Elton, a trans man, explained that the exception is in place to prevent suspects from abusing the policy.

"I could give you an example," Elton told the commissioners. "Say there happens to be people at the bars drinking and they are out having a night, men out there, and there's nothing about them that suggests that they might be a trans individual and they say, 'Hey, that's a really attractive female officer. I want her to search me.' So it could be taken out of context or misused by people not identifying as trans or in that space."

The new policy also makes exceptions in cases of emergency or when an imminent danger exists.