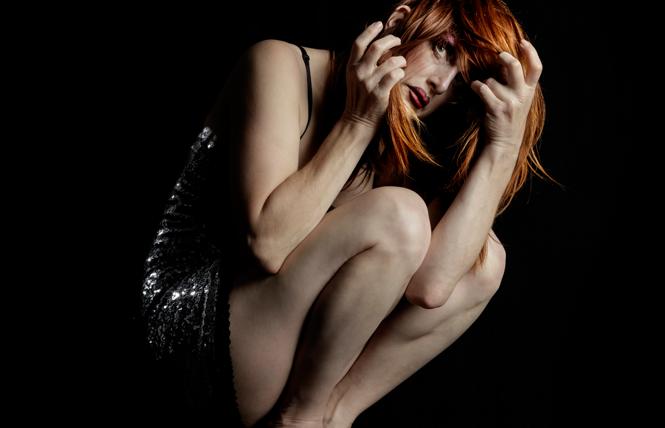 The performance also marks the debut of the Joe Goode Performance Group in presenting and producing outside artists. In this evening-length performance, Jenkinson and Kate use music, song, spoken word, critical theory, and drag to take a deep dive into the topic of the liberation and empowerment of femininity.

Jenkinson, believed to be the only cis female drag queen to win a major drag pageant, said in a telephone interview with the B.A.R. that the new piece "includes spoken text that conjures a coming-of-age story and uses singing as a means of channeling the scream queen and movement to depict the evolution, victimization, and liberation of the heroine."

"Girl" draws from a number of different sources, including Viennese Actionism, the short, violent movement in the 1960s that pursued the development of performance art and horror films that "subject heroines to treatments so graphic and obvious they pass the point of camp humor." The new production "intends to speak to the feminine in everyone with the questions: Who is the girl in you? What could you tell her?"

In developing the work, "We found ourselves really taken by the work of Carol Clover, who coined the term 'final girl' in her feminist reading of horror, 'Men, Women & Chainsaws,'" said Jenkinson. "This isn't a piece about horror or final girls, but it uses horror tropes and the concept of the final girl to focus on power, fear, violence, control, gender, and difference."

Jenkinson said she and Kate are excited to be able to create and produce "their first from-the-ground-up collaboration" in their 31 years together as a couple. Previously, Jenkinson has contributed vocals to Kate's works, and he has done music, video or sound design for hers, she said. The couple hopes to continue performing the piece in other cities, although "we've been so busy rehearsing every day" that they haven't had the time to think about other bookings.

Research for "Girl" began in residence at Tanzhaus Zurich in 2016, and the production also received support from the Kenneth Rainin Foundation, Zellerbach Family Foundation and Lighting Artists in Dance.

Jenkinson said her performing career began when she was a child taking ballet lessons in suburban Colorado in the 1980s. Her first foray into drag came when she was 15, and put on a pair of false eyelashes for a production of "The Nutcracker." "I remember thinking, 'So this is what my face is supposed to look like!' I suppose I could go back further and say that I started doing drag when I was playing dress-up as a child. As a performer, I get to continue playing dress-up," she said.

Jenkinson got a taste of alternative culture in high school when she discovered David Bowie and Boy George, and became friendly with theater geeks, punks, and gays. After studying dance at Bennington College, Jenkinson moved to San Francisco, hoping to launch a dance career. But when a friend took her to Trannyshack's weekly drag show at the Stud, her interests took a turn. For four years, Jenkinson went to Trannyshack weekly as a fan, absorbing techniques along the way. "That's when I really fell in love with performance," she said.

In 2003, Jenkinson created Fauxnique, who took the drag world by storm by winning the Miss Trannyshack Pageant. Fauxnique quickly pushed drag out of clubs and into the city's more conventional cultural spaces, creating solo performances incorporating drag into sold-out runs at theaters.

In 2007, Jenkinson became a resident at Counterpulse and ODC, where she created a full-length production, "Faux Real," stringing together drag numbers to produce an autobiographical sketch of how she became a drag queen. The show played here at the Climate Theater, as well as on stages in London, New York, and New Orleans.

As Fauxnique, Jenkinson has performed internationally in clubs, theaters, and museums. She performed her solo cabaret show "The F Word" at Harvard Arts' Oberon Theater, and was in residence at Headlands Center for Arts. She is currently writing a memoir for Amethyst Editions/Feminist Press.

Now in the middle of her third decade as a professional dancer, Jenkinson said the experience of producing a show with her husband Marc Kate has been a welcome change of pace. "When we go into the studio we are having conversations we've never had before," she said. Reconnecting with Joe Goode came at the right time. Jenkinson had been a student and fan of Goode's work for years.

"When I first moved to San Francisco, I really wanted to dance with them. It was my dream, which didn't wind up happening, but I did take a lot of classes" with JGPG. The two stayed in touch over the years, and after Jenkinson hosted a JGPG fundraiser, they began talking about a collaboration. When Goode invited Jenkinson and Kate to inaugurate JGPG's new series presenting outside artists, "We jumped at the opportunity,"

Jenkinson said there will be a discussion of this new collaboration in a post-show conversation on Sat., Oct. 13, in the middle of the run. "By then, I'll have more to say about it."