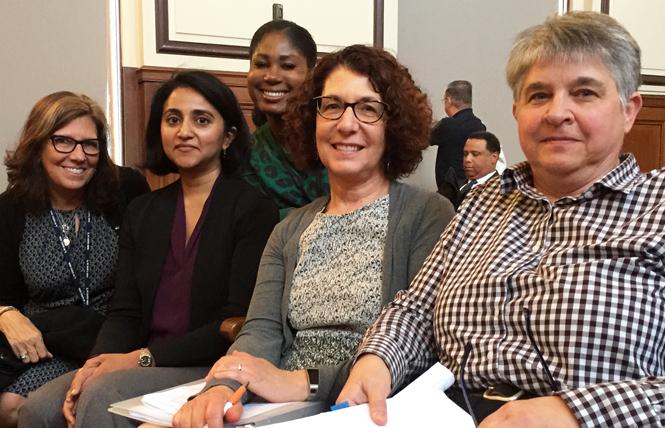 The San Francisco Department of Public Health presented its latest HIV epidemiology report to the Health Commission Tuesday, September 4, showing that while the number of new infections continues to decline, African-Americans and homeless people have persistently higher infection rates and poorer outcomes.

The DPH reported 221 new HIV diagnoses in 2017, the lowest number since the start of the epidemic. This represents a 5 percent decline from 2016, following two years of steeper drops of around 15 percent.

The latest findings indicate that San Francisco is making progress toward achieving the goals of its Getting to Zero initiative: zero new infections, zero deaths due to HIV/AIDS, and zero stigma against people living with HIV.

"While new infections are still dropping, the pace of decline is slowing, which will make it harder to get all the way to zero unless we continue to innovate with new programs to reach those populations where infections continue to occur," Susan Scheer, Ph.D., director of the DPH's HIV Epidemiology Section, told the Bay Area Reporter.

Sixty percent of people with newly diagnosed HIV in 2017 were men who have sex with men. People who inject drugs (including gay and bisexual men) accounted for 25 percent of new diagnoses, and heterosexual men and women accounted for 6 percent. The decade-long decline in new infections among people who inject drugs has leveled off and may be starting to increase slightly, according to Scheer. Fourteen percent of newly diagnosed people were homeless.

White people accounted for the largest proportion of new HIV diagnoses (38 percent), followed by Latinos (25 percent), African-Americans (17 percent), and Asians (13 percent). However, based on their small share of the city's population, African-Americans have the highest rate of new infections (116 per 100,000 people, compared with 39 per 100,000 for white men). New diagnoses continued to decline among white, Latino, and Asian people, but showed a slight uptick among black people.

Women represent a small fraction of new diagnoses in San Francisco (12 percent), but the diagnosis rate is about four times higher for black women compared with white, Latina, and Asian women. In fact, the rate for black women (43 per 100,000) slightly exceeds the rate for white men. Two percent of newly diagnosed people were trans women; data are insufficient for trans men. No infants or children have been diagnosed with HIV since 2005.

At the end of 2017, there were 15,952 people living with HIV who were San Francisco residents at the time of diagnosis - about 60 percent of whom are still living in the city - along with about 3,000 who were diagnosed elsewhere and now live here.

About three-quarters of people living with HIV are gay and bisexual men. As survival improves, their average age is rising. Sixty-five percent of HIV-positive people in the city are now over age 50, and 28 percent are over 60.

The number of deaths among people with HIV remains roughly level, at 244, and may be rising slightly, Scheer said. For the past two years, deaths have barely exceeded new infections. But mortality due to HIV-related causes continues to fall, accounting for 38 percent of deaths among HIV-positive people. The leading causes of death are now non-AIDS cancers (15 percent), heart disease (11 percent) and accidents, most of which are drug overdoses (8 percent).

"San Francisco has made tremendous progress in reducing new HIV infections, far outpacing the rest of the nation," gay Health Commissioner Dan Bernal wrote in an email to the B.A.R. "Now we're seeing a leveling-off, which means we have to be aggressive in serving the most vulnerable and hard to reach populations, particularly those who are homeless. We must also double-down to address the persistent health disparities among African-Americans, transgender women and other underserved communities."

Improvements in care
San Francisco continues to do better than the country as a whole when it comes to helping people with HIV get tested and treated in a timely manner.

Overall, 94 percent of people with HIV in San Francisco are aware of their status, showing the effectiveness of frequent and targeted testing, Scheer said. The number of people diagnosed late, around the time they develop AIDS, continues to fall and is now at 11 percent.

Once diagnosed, people with HIV are starting antiretroviral treatment and achieving undetectable viral load faster, which reduces disease progression and lowers the risk of transmitting the virus to others.

The latest figures show that 83 percent are linked to care within a month of diagnosis, 71 percent remain in care for three to nine months, and 85 percent achieve viral suppression within a year of diagnosis. Scheer explained that some people do not come back for a subsequent care visit within a year, and therefore are not counted as being retained in care, but they stay on treatment and maintain undetectable viral load. The time from diagnosis to achieving viral suppression has fallen from 145 days in 2013 to just 66 days.

However, the report shows some notable disparities. Looking at all people living with HIV (not just those newly diagnosed), 74 percent have undetectable viral load. But this falls to 67 percent for people who inject drugs and all the way down to 32 percent for homeless people.

As recently reported in the B.A.R., rates of gonorrhea and chlamydia are rising both locally and nationwide, with a smaller increase in early syphilis. Surveys of gay men in San Francisco show that consistent condom use has been declining for more than a decade, and serosorting dropped off precipitously around the time PrEP came into widespread use, according to Philip.

There are currently no biomedical approaches like vaccines or PrEP to prevent these STDs, but the city is prepared to test such methods if they are developed and receive funding, she added.

"STD rates are increasing nationwide, and not just among gay and bisexual men," Bernal wrote. "The commission was presented with innovative new approaches, and I was pleased to see increased priority placed on MSM and other priority populations with stronger community input."

Addressing the Getting to Zero goal of reducing stigma, Buchbinder noted that a growing body of evidence shows that people on treatment with fully suppressed viral load do not transmit HIV, supporting the "undetectable equals untransmittable" message.

"It's very important to get the word out. It's an important anti-stigma message and it's also important for decriminalization campaigns," she said, referring to laws that make it a crime to expose someone to HIV.