News Briefs: Doggie brunch will be a treat in SF 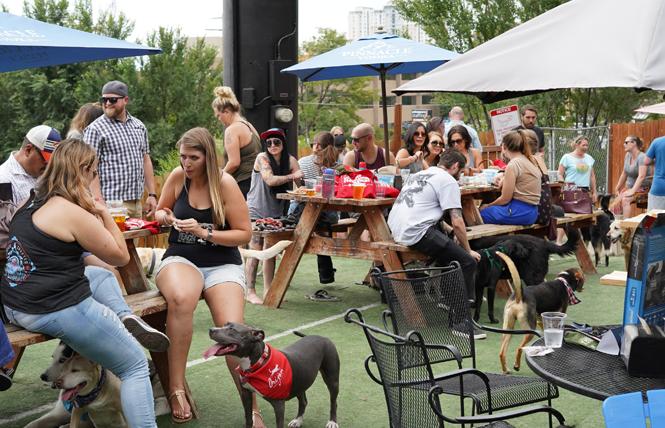 San Francisco pet lovers and their dogs will be in for a treat next month, when Orijen pet food holds a free dog brunch Sunday, September 9, from noon to 2 p.m. at Stable Cafe, 2128 Folsom Street.

Humans can snack on a flavorful menu dubbed, "Eat Like your Orijen Dog," that's inspired by the fresh regional ingredients found in the pet food. Doggies can enjoy freeze-dried treats.
There will also be a selfie station and the company will be giving out "doggie bags" valued at nearly $100 for the first 50 people who arrive.

"Orijen is designed to be the highest quality, most biologically appropriate food for dogs, rich and diverse in fresh meat and protein, always made with fresh regional ingredients," Julie Washington, client marketing officer at Champion Petfoods, Orijen's parent company, said in a statement. "That's why we're hitting the road to host 'Eat Like Your Orijen Dog' brunches - because a great way to learn about the most nutritious ingredients is to eat from a menu inspired by them."

The company has been holding doggie brunches in cities across the country.

To sign up for the San Francisco event, visit https://bit.ly/2vbIXBB.

First up, the Stonewall club's breakfast will be held from 8 to 9:30 a.m. at the Rotunda Building, 300 Frank H. Ogawa Plaza in Oakland. Local political leaders are expected to be on hand, as the club gears up for the November elections. The theme is "Your Vote. Your Power."

This year, the club will be honoring Alameda County Superior Court Judge Victoria Kolakowski with its Trailblazer Award. Kolakowski, who is married to Bay Area Reporter news editor Cynthia Laird, is the first transgender person elected to a judicial post in the country, and the first trans judge in California. She's the former president of the International Association of LGBT Judges.

Ola Osifo Osaze will receive the Community Champion Award. Osaze is a trans masculine queer person of Edo and Yoruba descent who was born in Nigeria. Osaze is the national director for the Black LGBTQ+ Migrant Project.

The guest speaker will be Marvin K. White, preacher, poet, and activist.

Admission is free for club members and $20 for non-members, which includes a complimentary discounted membership. For more information, visit https://eastbaystonewalldemocrats.org/event-3013771.

Meanwhile, at Frank H. Ogawa Plaza at Broadway and 14th streets that morning from 9 to 10:30 a.m., the Oakland Pride board and the firefighters will have a pancake and mimosa breakfast, with proceeds benefiting the Pride organization.

Oakland Pride spokesman Carlos Uribe said the event came about as a way to get more people to view the parade, and said the events likely would attract different crowds.

Award recipients will include collector and curator Lisbet Tellefsen, who will receive the Clio Award; and the San Francisco Gay Men's Chorus, which will receive the History Makers Award to mark its 40 years of service.

For more information and to purchase tickets, visit http://www.glbthistory.org.

The evening begins with a reception at 6 p.m., followed by dinner and the program at 7:30 and then a dessert buffet and after-party.

Grimm is the plaintiff in a landmark transgender student rights case. He sued his former school district in Virginia three years ago when he was prohibited from using the boy's restroom.

The court battle is still in limbo - the American Civil Liberties Union, which is representing Grimm, is waiting to hear from the 4th U.S. Circuit Court of Appeals in Richmond whether it will hear the case.

After Grimm graduated from high school, he filed an amended complaint that seeks, among other things, a permanent injunction preventing the board from excluding him from the restrooms when he is on school grounds for alumni activities.

Also being honored is lesbian author and activist Jewelle Gomez. She is the author of the double Lambda Award-winning "The Gilda Stories" and has been a longtime activist for various causes, including marriage equality.

The nonprofit Horizons supports LGBTQ organizations and groups working with the LGBTQ community through grants and other programs. The gala benefits that work.

Tickets are $300 for the dinner and after-party, or $75 for the party only. For more information and to purchase tickets, visit http://www.horizonsfoundation.org.

Updated 8/30/18: The Oakland Pride breakfast item was updated to include comments that the two events are not in competition with each other, but a way to broaden appeal.