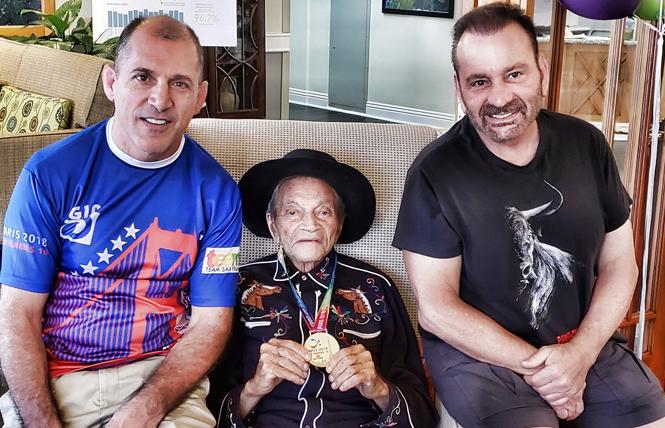 Paul Mart, one of the original Gay Games founders with Dr. Tom Waddell and Mark Brown, celebrated his 100th birthday with friends and family at a party in Palm Springs, where he currently resides in an assisted-living facility.

In the early days of the Gay Games, Mart was a tireless ambassador for them, visiting connections in Australia and Europe to recruit participants and encouraging the founding of LGBT sports clubs - work for which he was honored by becoming the first recipient of the Tom Waddell Award. Before that he was a Hollywood stunt man and horse handler (he manages the horses in a scene from "Doctor Zhivago" in which cavalry officers attack and break up a crowd of anti-czar protesters) and an undercover agent for the Allied Forces fighting Rommel in World War II, earning two purple hearts and the Silver Star.

A video tribute to Mart is available on YouTube at http://www.youtube.com/watch?v=Eb9dC0Z_v6Y&t=28s.

San Francisco's Gene Dermody, winner of the Tom Waddell Award in 2014, began his friendship with Mart during preparations for the 1986 Gay Games. He attended Mart's birthday celebration.

"When you talked with him, he had an incredibly active mind, a very astute business acumen, and a very realistic perspective on what Gay Games II could expect," Dermody said. "His international traveling had given him a sane perspective of the state of LGBT politics everywhere, and I always believed his statements were based upon real life experiences. He was first, a good businessman, and since he was paying the bills, you had to listen."

The late Debra Kent, who was a Bay Area consultant for nonprofits when she led the successful overhaul of bylaws and reorganization of the FGG, was one of four Gay Games activists named honorary life members.

Kent was brought in by the FGG's strategic planning committee in 2004 as the committee was tackling the issues of dysfunctional internal culture, board instability, and perceptions of the FGG as being imperious and insular. She oversaw extensive interviews of Gay Games stakeholders, moderated committee discussions, and drew up the restructuring blueprint that was formally adopted in 2006.

Also named honorary life members were Kurt Dahl, a former co-president of the FGG; Peter Moews, a sports activist in eastern Europe who was nominated for the Tom Waddell Award; and former ceremonies officer Shamey Cramer.

After the membership meeting, the FGG released the full results from its 2017 site selection vote, which resulted in Hong Kong being chosen as host of Gay Games XI in 2022. The FGG uses ranked choice balloting. On the first ballot, Hong Kong led with 31 votes; Guadalajara, Mexico was second at 24; and Washington, D.C. was third with 15 votes. After Washington was dropped, Hong Kong won with 38 votes and Guadalajara was runner-up with 31. One ballot for Washington had no second choice listed.

Two LGBT sports films to check out
A recent pair of films document the fight against homophobic barriers in sports and show how the Gay Games help spur that fight.

"Light in the Water" is a documentary on Logo TV about West Hollywood Aquatics, which formed in 1982 to send swimmers to the first Gay Games in San Francisco. The 65-minute film is educational and inspiring and tells the stories of athletes coming to term with their sexual orientations and identities, coping with tragedy and creating supportive bonds. It can be streamed live on http://www.logotv.com for anyone who subscribes to a network provider that includes Logo.

"Hot to Trot," which is produced by Gail Freedman and was featured in last year's Frameline, enters the world of same-sex ballroom dancing and its challenge to the graceful, but ruthlessly, sexist world of mainstream dancing.

The film opened in New York City last week, will play in Los Angeles at the Laemmle Music Hall Theater starting September 14, and will play in San Francisco at the Roxie at 4:30 p.m., Saturday, September 22.

For information on the film, visit http://www.hottotrotfilm.com.